Cricket can very clearly prove to you why life’s unfair at times. In fact, why it’s massively unfair.

If you were to at this very point refer to your search engine and say, “highest-ever ODI score team,” or were to put it differently “highest-ODI team total,” then the result would point to England men’s cricket team’s outstanding performance against Australia in 2018, when in June 2018, Her Majesty’s heroes smashed 481 runs for 6 wickets at Trent Bridge.

But is that the highest ODI team score of all time?

Probably your search engine is just as biased toward truth as is the average male executive holding a powerful executive post in a corporate.

One who can’t stand the progress of women.

Not inciting you. Merely stating facts.

Not by a men’s cricket team, with all due respect.

Unless and until you don’t tell the Internet what gender you’re searching for, it won’t guide you to the fact.

This pops up a question. Are we really being fair to gender equality by having the seeker necessitate what gender-based cricket result is being sought? Because if not, the immediate responses would hold men over women on an achievement where exactly the opposite is true.

Nonetheless, our job is not to wax lyrical. Nothing you read here is going to curb the unchecked male-domination in a sport where it’s not hard to see, the ladies are going all guns blazing.

To draw your attention on June 8- it was on this very date, two years back in time, where at Dublin, the White Ferns smashed, no drubbed, no actually blasted their unassuming hosts to a scorecard boasting 490 runs, for the loss of 4 wickets.

In an exhibition of outstanding and may not be wrong to say even unprecedented batting performance, New Zealand’s women’s cricket team created a record.

And in the process of doing so, understandably broke one too.

Though, interestingly, it weren’t Australia or India or for that matter England who had posted the highest ODI team score in the first place.

It were the White Ferns, in fact, who broke a 21-year-old record they’d themselves set when against Pakistan, with a scoreboard reading 455 runs struck on 29 January 1997, they posted the then-highest ever team score in Women’s ODI history.

The game, truth be told, lives for records. As does the fan. So when the cricketers respond avidly, they end up making the two- fan and the sport itself- fall in even greater love with each other.

Big credit therefore to the real giant of not just New Zealand cricket but also all women’s cricket Suzie Bates whose powerful 151 guided the White Ferns to a mesmerizing achievement.

This was something Laura Delany had not expected. Just as neither of her mates expected not one but two centuries to be carved (given the fashion in which they were, not struck) by the visitors.

While on the one hand, in batting first Bates, undoubtedly among the greatest all-rounders of the game immediately meant business dealing with Kenealy and Isobel Joyce brashly, she wasn’t the only destructor.

In 19 overs, with that score, Ireland were already on the backfoot. And in came Maddy Green, among the hardest hitters of the white ball, who’d strike her first, and thus far, only century- the brutish 122 laced with 15 boundaries.

Anyone watching the White Ferns dealing in boundaries and sixes would’ve thought it would be Bates engaging in destruction predominantly.

But they were wrong, as Green, typically a middle-order batter hit it far and wide and eventually also emerged as the last wicket to fall, going not before the 44th over.

But by then, the order of the day had been decided; Irish bowlers sent into submission at the back of arresting batting oozing hits to the fence with the same repetition John Wick’s gun fires bullets in all three installments of the enterprise.

If you thought this was cricket, you were perhaps seeing White Ferns doing to Joyce, Gaby Lewis, and even the petite Louise Little, only 15 then, what Khabib and Connor McGregor do to neophytes in a mixed martial arts outing.

Limited that it may have been that forgettable Dublin afternoon, there was a success for Ireland.

When Bates danced down to a flighted one by Cara Murray, who had just days before marked her debut, White Ferns’ then-captain found herself stumped.

But it wasn’t before she’d notched up a brilliant tenth ODI century at a strike rate of 160.

In the remaining 20 overs- which funnily transpired like a team blasting away runs in a T20 international, as if insofar New Zealanders hadn’t done so- an emphatic tally of 202 more runs were to follow.

Though a lion’s share of those belonged to puppy-faced budding all-round sensational Amelia Kerr.

For someone who found herself picked in the national squad basis a famous leg-breaking YouTube video, Kerr fired 81 off just 45 balls.

Later, Ireland, broken by severe body blows and the mental agony were bundled out for 144.

Though, to give credit where it’s due anyone wondering a tiny mutant spark couldn’t douse a mega-fire, the then 18-year-old scored runs at a strike rate of 180, bettering even her captain, the mighty Suzie Bates.

Sadly, all Ireland, who kept trying variations; medium pacers replaced by spin, replaced again by medium pace; could do was to watch.

As if someone’s house is being intruded by a wild bunch of mayhem-makers; you do nothing but stand in shock.

Though, what was a shocker at the YMCA club of Dublin may possibly have, within days, led Ireland’s shock to turn to admiration for their conquerors albeit with a pinch of salt.

On that tour, so utterly famished did New Zealand seem for runs that what followed in the Second ODI was a team score of 418 (June 10), which would mind-bogglingly be followed by the White Ferns turning up the heat again, in scoring 440 (June 13) in the Final game.

Probably that they got lucky enough in not bowling to Bates’ ladies?

Yet, it’s interesting, how little is celebrated of White Ferns’ fantastic achievement during that illustrious period from June 8-13 where, sadly, we don’t mention it, they also capped a rare distinction: of being the only ODI team in the history of the game to amass three back-to-back 400 plus totals?

Yet, when you go to your search browser- what are the chances of it underlining this commendable feat of women’s cricket?

Are we sure, despite all of this, despite Amelia Kerr scoring 232 not out just days after (her 81), wherein she broke the great Belinda Clarke’s (229 not out) feat, it’s only men who are contributing to the game? 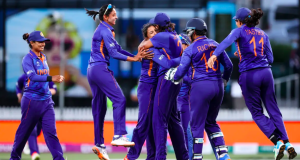 Dev Tyagi - March 15, 2022
0
Perhaps it may not be incorrect to suggest that what matters most in Cricket aren't just records. The...