Since the advent of modern cricket, South Africa- Australia rivalry has been a fierce and competitive one, much like the South American neighbors- Brazil and Argentina in football.
And it’s in this crucial battle where a man known as Albie Morkel first came to light and showed us a glimpse of his emphatic talent, which to this day beckons a question- did it go the long way?

But let’s first take a trip down memory lane.

In January of 2009, the first ODI at Melbourne in a 5-match series, Australia batting first set a competitive 271 thanks to a gritty 79 by the young Shaun Marsh and a 52 of just 50 balls from the ever-improving David Hussey.

At the time the Proteas were still in trouble with a little more than 50 runs required of around 6 overs.

In walked Johannes Albertus Morkel or as he is more commonly called Albie Morkel with a reputation that preceded him of being Klusener like destructive with the bat in the domestic cricketing circles in South Africa.

He thrashed 4 fours and a six in smashing a whopping 40 from just 18 deliveries to see the Proteas home with 3 balls to spare. The tension of the chase had eased thanks to the 50 run-stand he shared with stand-in captain Johan Botha.

South Africa not only won that game but the series 4-1.
Albie Morkel for his consistent performance with the bat and ball was adjudged man of the series. The next Protea all-rounder had arrived and his reputation justified.

Cricket was in his Afrikaaner blood, with his father Albert Morkel representing Transvaal in the apartheid era and his younger brother Morne, going on to become one of the best speedsters in Protea land and the world.

As the saying goes, what goes up comes down and that’s exactly what transpired with Morkel post a successful 2009 at the international level.

Although, he was akin to that trailer that heightened expectations, stoked interest, and even arrested viewer attention too, only for the movie to manifest into a tale cut short of sorts.

In 2010, due to a slump in form, Albie Morkel was dropped for a young and upcoming stroke maker David Miller and as a result, lost his central contract with Cricket South Africa.

This is why we understand why Cricket, apart from being a gentleman’s game is a harsh sport too. You just never know where or when the one replacing you is going to come from.

But was this bad luck spoiling a journey that was meant to go a long way?

Though, not the one to take this lying down, Albie Morkel went back to the domestic circuit and scored aplenty in the T20 Ram Slam competition to be selected again in the Proteas team for the 2013 T20 World Cup in Bangladesh.

Unfortunately, again after a mediocre tournament he was shown the door by the selectors and angered at the snub, Morkel admitted his international career was over and would rather focus on domestic cricket.

Wow, did he do that alright.

With consistent domestic performances, he became a stalwart at the Titans, South Africa’s most successful domestic teams, and amassed a massive 4117 runs and took a whopping 203 wickets making him one of the best all-rounders at this Pretoria based franchise.

He played a crucial role in winning them the 2014-15 Momentum ODI trophy with a bolstering 134 of just 103 balls against the mighty Cape Cobras.

How can Albie Morkel and the biggest club T20 tournament, the IPL not be spoken in the same breath?

Based on his successful domestic performances and his destructive charisma at the international level, Morkel represented one of the most successful IPL franchises Chennai Super Kings for a good 6 years since the inception of the tournament.

He was one of the most trusted lieutenants in the team that MS Dhoni so heroically commanded.

After leaving the Chennai Super Kings, the talents of the big-hitting all-rounder could not be missed as Royal Challengers Bangalore snapped him up in the 2014 auction.

He was then taken up by Delhi Daredevils in the 2015 season.
One of his better IPL innings was the quick 73 of just 55 balls against his former club Chennai for Delhi albeit unfortunately ending up on the wrong side by just 1 run.

In just 108 international appearances for the Proteas in ODIs and T20s, the Pretoria boy scored 1354 runs with 2 fifties and took 76 wickets. In just a solitary Test, he scored a 50 on debut against Australia.

That’s not phenomenal for record-keeping. But his moments of magic to win games for South Africa were definitely worth honorable applause.

In the 2019 season after having done it all in domestic cricket, IPL, and at the international level, Albie hung up his boots across all formats with nothing to prove further on the field.

Seeing a giant in the literal sense but also one whose talent warranted greater participation in the game, you thought a glorious could-have-been chapter was over.

Or was it? Well, not all find their full purpose on the pitch; some become the backbone for others to find their calling.

Albie Morkel took up the assistant coaching mantle of the Namibian Cricket Team in 2019 and helped them qualify for the current edition of the T20 World Cup in Australia.

A respected and hard-hitting all-rounder on the field and now with the coaching role off it too.

Wish you a very happy 39th and many more to come. 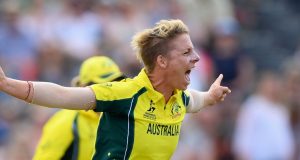 The Backbone of Scorchers, a tireless middle-order soldier for the Aussies,...

Chandhana Gogineni - January 20, 2019
0
The greats don't fight for attention. Neither do they search for it; they just happen to be themselves, purely dedicated to a purpose they...