The greatest all-rounder of the game Sir Gary Sobers was born on July 28, 1936.

38 years later, on November 22, a man who’s quite simply a brand ambassador of the word ‘swagger’ made his Test debut. 10 years later on May 31,’84 he’d play an inning that’s to this day considered the greatest ODI knock.

Two decades later, on April 12, Brian Lara would give Cricket its first-ever 400 by a batsman.

But what other dates are enormously significant for West Indies Cricket?

A few hours after taking her team to their first-ever triumph in a T20 Women’s World Cup, on April 3, 2016, a young woman was found in midst of an elaborate photo-shoot.

Adding to the mesmeric poise of Calcutta’s Victoria Memorial, a place you’d liken to being the city’s most famous landmark; the India Gate-equivalent to New Delhi was a West Indian dressed in a maroon jacket, black sandals, and crisp white shirt.

The jewel in her hand was elegantly decorated with an uncontrollable smile. A few minutes later, she would pose with fans hurling to the scene like honeybees to nectar.

Not always has the city of joy found someone commanding attention who’s not made a prominent contribution to literature, football, or the arts. Heck, her smile increased innocently as more and more came to click selfies with her.

A few hours back, she had contributed 59 important runs toward her team’s need of 149.

She had led from the front.

There aren’t many who rise to the peak of attention in the city whose greatest cricketing hero is still the ‘Prince of Calcutta.’

But this was no lame achievement.

Stafanie Taylor had beaten the giants of international cricket in Australia.

There’s always someone’s favorite team that wins. India have millions of fans. Not always are they based in India. Support flows from everywhere. When Australia win, which is pretty much the game’s recurring theme, it’s no surprise that countless are overjoyed.

Few things are as attractive as the prevalence of dominance. Call it a natural order of things.

But whenever the West Indies win, you do not take offense or treat the event in a negative connotation.

They may seem happy-go-lucky but they’re determined and play closely as one unit, almost philosophically proving the existence of Bob Marley’s “One Love,” as if to say their only true love is cricket.

You sensed an honesty, felt a connection with their emotional outburst on that unforgettable Eden Gardens evening when Stafanie Taylor and team danced away the immediate aftermath of a massive win over Australia.

What timing for the tune that became the victory march, the celebration song, and the party number for not one but two world cup triumphs that year.

But lest it is forgotten, it’s not always song and drama, win and glory for Stafanie Taylor. The innocent smile appeals to you genuinely for it often overcomes what are exasperating challenges.

And it’s a smile that’s not parted with its calm wearer even in the face of adversities.

Since 2016, the West Indies women’s side have often been at the wrong end of results.

A T20-drubbing at the hands of India in 2019 was just as bad as the team’s painful loss to the White Ferns, where they lost all ODIs and nearly all T20s barring the washed-out game at New Plymouth.

To an outfit that seeks certainty, desires stability, the only constant in the last year and a half has been the word called change.

It’s not like that the West Indies women have witnessed tiny changes.

The big force in the lower order Marissa Aguilleria, importantly, a former captain has called time on her career. Before the 2020 World Cup, the women contested minus Deandra Dottin, who, as evident in the prized tournament, was found wanting.

It didn’t help the batting department to fight without a smashing record-breaker, someone with 2 T20 centuries. And that too for over a year.

While on the one hand, there’s a massive influx of youngsters all keen to forge their journeys- think Cherry-Ann Fraser and Aaliyah Alleyne, there’s a massive need to stabilize a batting order that’s often appeared rusty and seemed wanting.

Before the lockdown, during the tournament where it all mattered, no other batter beside Shemaine Campbell seemed in the thick of runs. Her 43 versus Pakistan was as dogged an effort as a last-wicket stand that reaches 50 amid uncertainty. The Guyanese walked into the middle with the score tottering at 3 for 28.

But the one force that’s kept the game up for the West Indies where they’ve been nearly down and out, given the challenging year and a half phase is Stafanie Taylor.

For someone who thrives on challenges, and oversaw a disappointing World Cup campaign, Stafanie’s own performances were anything but disappointing.

Quite like her useful 94 in the ODI versus India in 2018-end, was her 43 against Pakistan with Diana Baig and Anam oozing fire.

In the previous game, she remained unbeaten in a useful 26. It was the knock that took her team home when they succeeded at making an ask of 79 appear needlessly complicated, taking the game to the 17th over.

But while at all times of scoring runs, she was also among the wickets.

Few athletes seem as encouragingly absorbed in the game as Stafanie Taylor, whose world cup campaign ended with muscle trouble.

That her team was utterly reliant on her could be established by the outcome of her team’s final game, less of a contest, more of England’s domination.

Stafanie Taylor was batting and battling on 15 when drilling a single to cover off Sciver, she started limping. So did the Windies scoreboard, with the captain, making second-highest runs gone retired hurt.

But in the times to follow, let’s not forget the 2021 ODI world cup is around, Stafanie Taylor will have to pick herself.

The way she almost always does; slamming most runs against India during her team’s nightmare outing at home. The 79 and 94 at North Sound came in contests that were all about Poonam Yadav, Mandhana; not McLean’s useful batting, Nation’s power-hitting.

Cricket, ever reliant on team-synergy always finds a way of attributing magical ability in one tour-de-force figure.

India have that in a troika in both batting and bowling; Mandhana, Harman, Rodrigues, and Poonam, Radha, and Shikha.

Australia are the sorcerers at that they have 11 individual performers who can turn into stars on any given day.

Don’t commit the mistake of ignoring the West Indies.

In Hayley Matthews, they’ve got a cracker of a batter, a hit-maker who can compile audacious knocks on sixes and fours alone.

Should Dottin return to form, it’ll be bloody brilliant.

The lower order is more capable than sticking around.

But who apart from Stafanie Taylor would you count on for stability?

In that rests a question.

Is there a glue that gets everyone together, if at all?

Despite 229 matches and 7,700 plus international runs along with a world cup-win, earning of wide regard and deserving fame, can Stafanie Taylor contend with an easy day at the office?

How strong in her absence seem the West Indies? 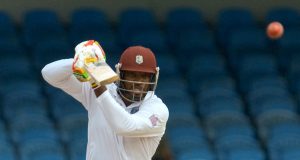 Counter-punch: How A Mighty Chris Gayle Six Resulted In A Slump...

Omkar Mankame - August 27, 2018
0
A story that can be filed under the section ‘Shocking but true.’ The hero (rather, for Test match purists, also the villain) of the tale is the ‘Universe Boss’ from...