The 2011 World Cup will always hold a special place for two prominent sides. India, without a doubt. And Sri Lanka, playing the finals for the third time in their lives.

Though, over the years, a particular moment has stood out having embodied the gala festival of Cricket.

Probably it’s down to the impact.

Who can possibly forget Dhoni‘s lofted hit over long-on?

It got Shastri to scream on the mic, brought Mumbai on the edge, India on its feet.

But was the World Cup only about that explosive win; Dhoni’s hurrah, Yuvraj’s all-round heroism, and Sachin’s magnificent ton versus the Proteas?

Perhaps when the big hero steps on the stage, there’s little reserved for the co-actor.

Maybe that’s why we conveniently forget in the same tournament where India won the crown, an Ireland thumped England, and a little-known Martin Guptill, aged just 24 notched up nearly 300 runs in his first world cup.

Just the way it doesn’t strike our cricketing sensibilities that in the very checkered league two hat-tricks were taken by different bowlers.

While Malinga, a popular name stands out for his Colombo exploits against Australia , we don’t recollect who was this other guy who stood out at New Delhi on February 28.

Does Kemar Roach‘s hat-trick against The Netherlands have something to do with the feat considered less-celebration-worthy? Or is a lack of regard down to Roach cleaning up the tail, despite starring with career-best figures (6 for 27)?

While to some the achievement may not even warrant intense prognosis, truth is, Kemar Roach, back then, took the first-ever hat-trick for a West Indian in a World Cup.

Lots to celebrate if you’re an avid West Indian fan. It was just the right-armer’s second World Cup game.

Roach was only 23 back then and not even 20 ODIs-old when he crushed an unassuming opponent.

Hitting the deck hard, pushing a body that hadn’t waged physical challenges yet, Roach bowled in the whereabouts of 150 kmph on a wicket where runs came in plenty.

West Indies making 330 of them.

No other bowler since has managed a hat-trick in the format for West Indies.

Surprisingly, his team has contended little with the horse-like-powered paceman in the format.

From thereon, and that’s nearly a decade, he’s only featured in 56 more ODIs.

Oddities are but a feature of the resilient fast bowler who hails from the land of so Malcolm Marshall.

Someone who at 5’6 presents an anomaly to the model figure of the giant Caribbean tearaway.

So what was Roach doing all this while?

He was growing his Test credentials.

Exactly as how the speed-gun becomes the thing to check when the ball is thrown to Steyn or Starc, the Test matches become the subject of talk when it concerns Kemar Roach.

The man who, you may or may not have noted, has been on fire; taking 46 of his 193 Test wickets in the last two years.

And it’s recent achievements that have catapulted a rugged competitor to a position of ascendence where teams are compelled to think about “the Kemar Roach-factor.”

In a space of last 24 months, he’s pushed a Root, Stokes, Woakes, Buttler-powered England to the backfoot, steering West Indies to a spirited and perhaps unexpected Wisden Trophy win.

You know the much-awaited return to the former glory days isn’t some random mumbo-jumbo when a 5 for 17 features among the best-spells in an year where Bumrah took a hat-trick.

He single-handedly sent a Shakib-led Bangladesh to their lowest ebb in Tests when during Antigua’s embarrassment of 43-all-out, Roach walloped half the side conceding only 8.

In 2018, Roach emerged with roaring sounds at North Sound in a display of brute pace bowling, which evoked the widest of smiles from Sir Curtly Ambrose, not the one to give it away easily.

Not once in the last two years, twelve games has Roach ever averaged over 23 in Tests.

Quite remarkable considering it’s not Joe Root and Shakib Al Hasan alone who’ve tried picking him for runs but waned out trying.

A little over half a year ago, Kemar Roach became the only reason for West Indies to muster a smile at Jamaica.

The very Test where India whipped them through a 257-run defeat.

At Jamaica, where India had dominated the discussion with the bat, Kemar Roach was making the ball talk for his West Indies.

After evidencing horrors from the dugout, his team stuttering at 22 for 5, he came out to bowl, after contributing 17 of his team’s 117, in reply to India’s whopping 416.

And it didn’t take him long to say a few things with quintessential Caribbean zest.

After dismissing Agarwal early on in the first session, he sent Rahul and Kohli back on successive deliveries.

First, he angled one sharply around the off that moved just enough from Rahul to be caught flirting with it. Then on an identical delivery to the one that got Rahul, only a yard quicker, Roach sent the Indian captain back.

The big whale was struggling; the Barracuda was relentless in its bite.

Truthfully speaking, never before has the need to see a fit and consistent keen Kemar Roach been so urgent for the West Indies.

Kemar Roach may not exhibit the biting pace you associate with Dale Steyn.

He may not move you akin to Shami with that ‘perfect seam presentation.’

He doesn’t possess the masterly-disguised slower ball either.

His game is punctuated by variations. The fast-pitched length delivery. The savage short ball.

Hailing from a region worshipped for burly pacers, some admired for their meanness, others for their imposing physicality, Roach is defined by unwithering focus.

Not brawns as such. But brains.

For someone who doesn’t possess that Curtly Ambrose-like madness for destruction, Kemar Roach is the method to the madness.

But moreover, he defines a keenness to go all-out despite knowing it’s probably too late.

South Africa were closing in on a series win. Barbados was upset by shoddy West Indian batting.

But if anyone could’ve turned a ridiculous 46 run ask by the West Indies of their visitors into a contest, it was the true Bajan boy.

Not many would cherish tackling Jacques Kallis.

Suddenly, with South Africa only 18 away, a young pacer presented the world’s greatest all-rounder with a barrage of variations driven by almost maniacal power.

In came a short one outside off. Then another into the body of the rock-like figure. Another one went past Kallis’ unassuming gaze.

In a land renowned for Calypso beats, this was chin music.

The David against the good-natured Goliath.

Would it have been any easy?

But this is Kemar Andre Jamal Roach. He knows little about giving up.

He didn’t in a career marked as much by threatening injuries as 12 fifers and 15 four-wicket hauls.

When the back spasms and muscular injuries weren’t enough, Roach found new ways of running into agonizing pain.

Heck, he made light work of an accident that nearly ended his life saying, “Sorry to scare my friends and family.

Does anyone recall the nasty crash just outside Barbados where his BMW flipped several times only to land at the 3W park?

Nevertheless, the times immediately ahead would require something special from this passionate bloke whose second nature is to endure.

The West Indies are up against England. The very team Roach mocked at with his 5 for 17 the last time the duo battled.

Early precedent to a much-anticipated live-wire has been set by Roach himself saying there’s no time for friendships, speaking of Jofra Archer.

Moreover, he’s heightened expectations saying Windies have ‘what it takes to topple England.’

It’s a perfect warning to awaken the giant within.

The very fighting force that stood up for his team in 2011, as a youngster in New Delhi, producing rip-roaring pace amid Rihanna’s Rude Boy.

Can the boy get ruder in what lies ahead? 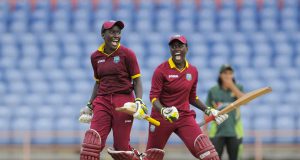