While Women’s Cricket has taken a leap since the 2017 ICC Cricket World Cup, many changes have been witnessed as well. Changes in rules are something that didn’t occur before but in ICC’s ‘100% Cricket’ webinar recently, Sophie Devine and rising force Jemimah Rodrigues suggested a few innovations could be done to promote the game and help build its fan base.

While Devine urged for smaller and lighter cricket balls, Rodrigues suggested that the length of the cricket pitch could be reduced, which she thinks might attract more fans.

What do you think?

Not wrong to suggest experimentation is nice but it’s often polarising.

Ever since the webinar took place, from coaches to cricketers, all have shared views. While Australia’s head coach Matthew Mott rejected the idea of shortened pitches to speed up the game, in another ICC webinar, speedsters Shikha Pandey and stalwart Jhulan Goswami urged not to tinker with rules.

“I know you mentioned about shortening the pitch and fastening the game up. To me, it’s about playing on good surfaces. If we’ve got surfaces where everyone has a chance to play a part in the game, it’s going to be a very big part of the next five to ten years and making sure we’ve got a product that people love watching,” Mott had earlier said.

Recently in a series of tweets, Shikha Pandey shared her views on the aforementioned. She said that there is no need to tinker with the rules by reducing the weight/size of the balls, pitches, or even boundaries. Shikha expressed that authorities should look into the marketing and grass-roots developments instead of changing rules.

Surely, it seems right; for if the game is to grow the change is often from ground level. The bottom-up approach.

“I have been reading/ hearing a lot about the changes being suggested to help grow women’s cricket/ make it a more attractive product. I personally feel most of the suggestions to be superfluous,” her thread read.

She added, “An Olympic 100m female sprinter doesn’t run 80m to win (gold medal) and clock the same timing as her male counterpart. So the whole ‘decreasing the length of the pitch’ for whatever reasons seems dubious. Also, it almost definitely takes the double headers out of question.

Reducing the size of the ball is fine, but as Ian Smith suggested, it only works if the weight remains the same. This will allow for bowlers to grip the ball better – more revs for the spinners – and hits will also travel further (not be the case if it is light).”

“Please don’t bring the boundaries in! We have surprised you with our power-hitting in recent times, so remember, this is only the beginning; we will get better. Please have patience. We are skilled players, who are evolving.

“Growth can also be achieved by marketing the sport well. We don’t have to tinker with rules or the very fabric of the game to attract an audience. Why not have DRS, Snicko, Hotspot, all of the technical acumen and live broadcast for every game that we play anywhere in the world. Heavy investments at grass root levels, equal playing opportunities, zero discrimination, etc,” she shared.

Shikha further claimed that women’s cricket, or women’s sport in general, should be seen as a different thing from men’s games and gave the example of the record crowd that was witnessed in the Melbourne Cricket Ground earlier this year for the Women’s T20 World Cup final.

“Please, don’t compare women’s sport, women’s cricket, in this case, with men’s sport. We need to see it as a different sport altogether… A sport that 86,174 spectators turned up to watch on March 8 and several million watched live on their television sets.

“They saw something special in us, and here’s hoping you do too! #FillTheMCG #WomensCricket #BetterEverday @ICC,” she concluded.

After her tweets, where many backed her thoughts, her teammate, and the highest wicket-taker of Women’s Cricket in ODI, Jhulan Goswami also supported her by asking if the changes are needed.

She said there is no need to bring such changes when the game is already seeing huge popularity as well as improvement in players’ skills.

“You don’t require so many changes to glamourize women’s cricket. In the 2017 World Cup final, you saw a full house. Highest viewership in television. In the recent T20 World Cup, more than 80,000 spectators came to watch the match. What is the need of changing anything?,” asked Goswami in her recent interview with Firstpost.

“The girls are improving in every skill, be it fielding or power hitting. They are hitting sixes and boundaries more often, throwing from the boundary line has improved and so has run between the wickets. I don’t think so you need to change a lot of things,” she again added.

You’d think their thoughts are justified as Women’s Cricket has come a long way in the last three years – be it an increasing number of games or brands. They are equally popular both on and off the field.

Never before has the talk to be the next Mithali or Meg Lanning has been prominent.

While the women’s game lags the giant leaps you’ve come to associate with the men’s version, you’d reckon a comparison wouldn’t be the fairest thing to do at this moment. Men’s cricket has been covered, televised worldwide over the years – be it bilateral or any kind of series whereas women’s cricket has been getting the coverage in recent times that too limited.

Amid this situation, one can’t expect a fan base worldwide where there is no global telecast of a bilateral series no matter which teams are playing.

Needless to say, Women’s Cricket can only grow with proper marketing the way it has been done for men’s cricket. Maybe investing at the grassroots will also work. 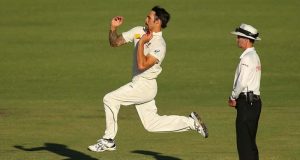 Johnson: An Anti-Christ For Batsmen, A Victor for Australia

Dev Tyagi - November 2, 2017
0
To sledge is no cardinal sin. Many have uttered few nosy limericks in their attempts to make a splash of batsmen’s holy grail- the...