We fans have seen hat-tricks, four-wicket hauls. Surely, there’ve been fifers over the years. Stuff that’s thrilling and even unexpected at times. However, some feats get even more attention when a woman does this. Always phenomenal when someone sits back and take notice of a woman doing exactly what men are accustomed to, with ease.

Well, the debate can continue. But any doubts about the women’s game lacking excitement and awe-inspiring stuff gets out of the way when someone picks up a four-for without conceding a single run.

Time for the tables to turn. How many men have managed that, and that too with ace leg spin?

Proteas skipper Dane van Niekerk did the unthinkable to the West Indies, leaving them in tatters, on this very day back in 2017.

What’s more? The huffing and puffing were ensured given the feat came amid the mother of all cricketing battles.

Here’s what Dane Van Niekerk left the Windies with.

No one can remove that from the checkered history of the women’s game.

With this, Dane Van Niekerk became the first bowler taking four or more wickets without conceding a single run across all internationals (men’s and women’s cricket included).

Although three for none has been registered twice in women’s ODIs and once in women’s T20Is and only once in men’s internationals before, van Niekerk‘s figures made another record – it was also the best by a captain in the World Cup.

However, it was not her who started destroying the Windies batting order. The damage was done earlier by the speedsters Marizanne Kapp and Shabnim Ismail, both of whom reduced West Indies to 5 for 16. While the batters couldn’t find an answer to the fiery spell from the speedy duo, only Chedean Nation reached double-digits.

Ismail trapped Hayley Matthews before the stumps and bowled Stafanie Taylor. In the eighth over, Boyce got a leading edge back to Kapp off the very first ball and Kyshona Knight was hit on the front pad off the second delivery and bowled Deandra Dottin off the fifth. West Indies lost their half-side without even putting 20 runs on the board.

While Ayabonga Khaka and Moseline Daniels kept the batters under the pressure, they conceded only 14 runs in the nine overs, including four maiden overs. This was before Dane van Niekerk brought herself in the middle to spin a web of confusion and perplexity for the Windies batters.

Melissa Aguillera, who was batting on 3 after from 37 deliveries, tried to sweep but missed and was bowled. Then, Shanel Daley also got a top-edged swing off van Niekerk to the short-fine leg and made things worst for her side.

Marizanne Kapp then added another one in her tally and finished with the best OI figure when she bowled Afy Fletcher. By then, West Indies were nowhere in the game and it was that time when Nation was dismissed.

Both Kapp and van Niekerk finished the rest of the jobs and registered the two best bowling figures among South Africa players in a World Cup game.

However, it took 6.2 overs for the South Africa openers – Lizelle Lee (29 off 16) and Laura Wolvaardt (19 off 22) to reach the finish line with ease. That makes it the third-quickest successful chase in ODI. They won with 262 balls in hand which is the third-largest win in terms of balls as well.

While the win looked easy, it wasn’t easy for Dane van Niekerk to reach that height. It’s her sheer brilliance and hard work that made her one of the best all-rounders in recent times. Moreover, South Africa wouldn’t have reached this height if Dane van Niekerk wasn’t their captain.

Needless to say, her caliber will guide the team to many more stunning victories in the future too. 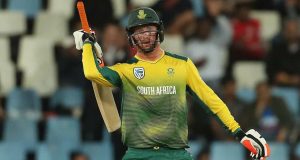 Pranay Rangra - March 2, 2020
0
Faf represents records and runs both, both coming often not in the best of circumstances. Quinton has proven dexterity; as good with the gloves...