England and Wales Cricket Board has confirmed that all 18 first-class counties will play a shortened red-ball tournament to give the honor to Bob Willis – the late England seamer.

The competition is expected to take place in the form of three among six-team groups, where each county will play five matches ahead of a final at Lord’s in September.

Bob Willis, the former captain who had played 90 Tests and 64 One Day Internationals – passed away in December at 70. Notably, he is considered as one of the best speedsters of England as well.

However, the reports also suggested that the competition has faced opposition from a few counties, although the ECB shared on Friday that all 18 first-class counties have signed up for the tournament.

However, a few clubs had raised concerns about the additional cost of four-day cricket and also over bio-security and the health of their players amid the outbreak situation of global pandemic COVID-19.

An ECB statement read: “All 18 first-class counties have agreed to participate in the same competitive red-ball and white-ball competitions during this summer’s shortened men’s domestic season.”

The Bob Willis Trophy will start on August 1, after the T20 Blast from August 27 and the fixtures will be out by this month.

Neil Snowball, the ECB’s managing director of county cricket, said: “The enforced break due to Covid-19 has provided a challenging period for the county game, during which time the 18 first-class counties have been united with a common goal to get back to our core function of playing cricket.

“The commitment of the chairs and chief executives of the first-class counties to work together to achieve that ambition has been resolute, and we will remain in a close discussion as we continue to assess risk factors that need to be mitigated in order to ensure the safety and welfare of their players, coaches, and staff,” he added.

He further added, “We are all delighted that agreement has been reached across the game and we are now in a position to look forward to and prepare for a new men’s domestic season starting on 1 August.”

However, Lancashire cricket director Paul Allott had said that the naming the red-ball competition after Bob Willis, would be a tribute to the legendary cricketer.

“What a great gesture it would be,” he added. “Bob was always championing a truncated county season with a final involved in it as well. It might fit both poignantly and be in the right way he would have wanted.” 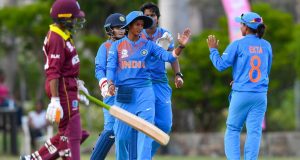 As India Women Stung Windies Women Mercilessly, What Lessons Did We...

Chandhana Gogineni - November 28, 2019
0
India Women piped the West Indies to clinch its series double win, where spineless Windies faltered against India’s dominance. It could be said, the key...