“If I had 12 Jermaine Blackwoods, those are the kind of guys you want to step on a field with…sometimes he feels as though he can carry everybody on his shoulders. He’s that confident a player.”

This was how skipper Jason Holder summed up the occasion and the ‘man of the moment’ and his performance in the first Test. Jermaine Blackwood’s fine 95 had just taken West Indies to a famous win at the Ageas Bowl, Southampton. It was a proper redemption story for the Jamaican who has had a roller-coaster career so far.

Blackwood has been out of the West Indies team for more than two and a half years. All he played was one innings against India last year as a concussion substitute. He made his debut in 2014 but was constantly in and out of the side until he was eventually dropped in October 2017.

In fact, he was dropped as many as six times. Yet, he kept coming back. Cricket’s version of the Terminator?

He had this reputation of being a basher in the middle-order. He did score runs but at one stage they dried up. In late 2017, the West Indies team management decided to do away with the young Jamaican.

However, Jermaine Blackwood went back to domestic cricket and worked on his game. In the 2019-20 first-class season back in the Caribbean, Blackwood piled on the runs. He changed his approach, he batted long and tended bat big as well. The Jamaican batsman was a lot more patient and was willing to go through the grind.

And the results followed.

In eight games, he emerged as the leading run-getter in the tournament. The 28-year-old batted at No. 3 and got 768 runs, which included six half-centuries and one hundred. That hundred came in the last game of the tournament and he smashed a 248 where he batted for nearly eight and a half hours.

It was on the sheer amount of runs and performances he put in the domestic arena that got him a ticket for this England tour. And ahead of the first Test, Blackwood himself said, he was out to prove his critics wrong and show the world he’s a changed man and a much-improved player. His goal was to bat time and bat as long as possible.

“I’m from the Caribbean, it’s only natural for me to score runs. I want to add a little bit more to my game and bat time. I’m really pushing hard for that and I’m really putting the mental work as well into bat time. Once I bat time, I will score runs,” Blackwood interacted with the Press Association a few days back.

However, when he smashed one straight to James Anderson at mid-off in the first innings, it didn’t seem that way. There was a lot of talk going around about playing first-class cricket and Test cricket is a different ball-game altogether. Michael Holding on air was pretty critical about his dismissal as well. It seemed like all the hard work Blackwood put in the domestic season was going to vain as he was once again dismissed playing an unnecessary attacking shot.

So, out of all the players, Blackwood wasn’t the favorite to help West Indies chase down 200. At 27/3 in the second innings, chasing 200, with John Campbell out injured, it seemed like England might just run through the West Indies batting line-up for fun. Anyway, everyone expected Blackwood to throw his bat around and score a quick 20-30 and eventually mistime or edge one.

That wasn’t the case.

Jermaine Blackwood stuck to his word about batting long and dug in. There were flashes of that aggressive intent but he buckled up, put his head down, and stuck to the task. Along with Roston Chase, he got the West Indies innings back on track. He didn’t get bogged down though. Yes, he did play his shots and it was vital to keep the scoreboard ticking as well. The No. 6 batsman found the boundary at regular intervals and started to shift the pressure back on the England bowlers.

This No. 6 took the pressure off the seniors. Chase, Dowrich, and Holder form the heart of this West Indies batting line-up. Blackwood did the bulk of the scoring and took quite a bit off them.

In his four-hour and 154-ball vigil at the crease, he blunted out Jofra Archer who was breathing fire, he negotiated Dom Bess who was getting some nice turn and dip, he saw through the accuracy of James Anderson, he eased away against the pace of Mark Wood and he survived the potent and threatening reserve-swing of Ben Stokes.

He batted beautifully for his 95, mixing caution with aggression excellently and taking West Indies over the line.

You wondered was this the most important 90-something knock by a West Indian in recent times?

He did have his chances. Was dropped a few times. There were plenty of plays and misses. England missed a couple of runout chances too. But Jermaine Blackwood didn’t let any of that affect him.

You need a tad bit of luck on a fifth-day track chasing a tricky target and Blackwood had that on his side. Moreover, he was batting against his favorite side.

He averaged 55.33 against England in Test cricket. In fact, this wasn’t the first time he made a telling contribution in a run chase against them.

Back in 2017, Shai Hope might’ve stolen the limelight with his twin tons at Headingley. But Blackwood made some decent contributions as well. He scored 49 in the first innings before scoring a quickfire 41 in the second innings, share a vital 74-run stand with Hope for the fifth wicket. In 2015, chasing 192, Blackwood came in at No. 6 with the score 80/4, he scored 47 not out to take West Indies over the line. This was after he had top-scored in the first innings with 85.

Those performances are not really highlighted though. Blackwood wasn’t even guaranteed a spot in the XI ahead of the first Test. He had made just 62 runs in four innings in the two intra-squad warm-up games. It was only West Indies’ decision to go for batting depth at No. 6 rather than a lead spinner in Rakeem Cornwall that got Blackwood the spot.

However, now Blackwood has all the spotlight to himself. He might’ve fallen five runs short of what would’ve been a deserving second Test hundred. But he got the job done, giving West Indies a rare overseas series lead. This 95 was not only a match-winning but a career-defining and a career-resurrecting innings for Blackwood. The 28-year-old Jamaican has shown he is here to stay with his changed approach.

This might be a changed cricketer but it is rather surprising for a player who has an attacking nature and style of play hasn’t played a lot of white-ball cricket. Forget internationally, Blackwood has played a mere 19 T20s with the last one coming in 2015. There are very few West Indian players who don’t play T20 cricket in this day and age and Blackwood is one of them.
He’s played just 59 List ‘A’ games compared to 102 first-class games.

That’s a big surprise when a modern-day player’s white-ball games are nearly half to that of his first-class matches. With West Indies experimenting a touch under head coach Phil Simmons, Blackwood could be worth a try. Yes, his white-ball numbers aren’t great. But West Indies keep going back to their old foxes like Lendl Simmons among others. Blackwood could be worth a try.

This is a 2.0 version of Jermaine Blackwood, a refreshed, feisty character, who has shown signs he can adapt his game. For now, it seems, the rower of his raft can see a way beyond the roller-coaster ride. 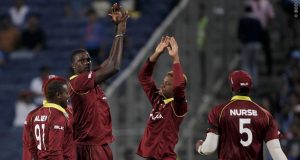 What are the key lessons for the West Indies from the...

Gaurav Thakur - November 3, 2018
0
One of the key lessons for the West Indies from the ODIs v India was that they now know they can fight and can even...