Probably one of the most debated topics with regards to England cricket’s T20I setup is the discussion around whether Jos Buttler a T20 superstar when opening the batting, is he wasted or in fact underused as a middle-order or in the finisher role that England have got him to do in their national T20I setup. There have been a lot of cricketers who have had to compromise one ability of theirs, something that they might have been more dangerous doing but eventually has fallen prey to team combination requirements which might have seen them bat out of positions they are not at their very best but end up doing that because they are the best option available for the team.

One of the thing that stands out for me when talking in regarding this context is a statement made by Rahul Dravid when asked about why he made a young MS Dhoni who looked dangerous opening or batting number 3 in ODIs to start taking up a role lower down the order in his tenure as captain to which he replied that there were many who could do what MS did at the top of the order but hardly any to do what he could do for the team lower down in the order. Is this the case with Jos Buttler or do England have different options?

Through the course of this article, I will be putting forth some statistics that speak about the impact of Buttler as an opener as compared to that of Buttler the middle-order batsman in T20s and T20Is respectively.

In terms of quality of T20 cricket, there is no debate regarding the fact that the IPL is the toughest league in the world and probably has the best from all over the world barring Pakistanis.

The transition came about after Rajasthan Royals felt he was underused as a middle-order batsman and wanted him to unleash as an opener at the top which added some very well needed impetus into their innings more often than not.

Buttler played 7 games for Rajasthan as a middle-order batsman in 2018 and he averaged about 20.00 in that role and at below par Strike Rate of 126.32 and when he made the move to the top of the order in 2018 there was some massive success he found in that role. In the next 6 innings that season he played as an opener, Buttler averaged 107.00 scoring 428 runs, and all of these at a strike rate of 165.89.

In the context of the English set up the problem arises due to the simple reason that is being spoilt for choices. England have tried Buttler at the top on some occasions and have kept changing his spot in that order but Bairstow and Roy look the more preferred option as of right now and with another superstar in Banton coming through the ranks the top order competition gets stiffer.

Buttler who has just played 9 games for England as an opener in this format has easily shown better numbers in this role as compared to that of his as a middle-order batsman.

The fact that Buttler is one of the best finishers right now in the ODI’s probably has a big role in people believing he can do that in the T20I’s as well but his numbers as a middle-order bat are not as prominent as his world-class figures in the ODI’. Another interesting aspect for a middle-order batsman is his ability to play spin bowling because a lot of the middle overs these days are bowled by the spinners, so one has to be on top of his game.

This above number of Jos Buttler’s against leg-spin is a point to be noted because if he is in at overs 12-16 he could be facing a lot of this and if England wants him to purely play the finisher isn’t a batsman of Buttler’s caliber in T20 batting 4 overs way too less. Considering England have high-quality players of spin bowling in Morgan and Moeen Ali do they need to keep Buttler for the middle order.

The most obvious reasoning that England have for this approach is the fact that down the order they lack a power hitter of the likes of the Rusell’s and the Pandya’s which makes them feel that Buttler is their best option for this role. England have used Moeen Ali at number 7 and the worry with Moeen batting this deep is the fact that there is a concern that he cannot strike big from the word go facing pace bowlers in the death overs and is probably another player who probably can’t fit in an ideal position for him because he is at his lethal best playing spinners in the middle overs but comes in too late to be doing that.

In Bairstow England have a batsman that can adapt to the role of middle-order batsman as he has much better numbers against leg spinners as compared to that of Jos Buttler. Despite him and Roy looking more likely to be the opening pair, if England wants Buttler to open then pushing Bairstow down the order won’t be a bad option at all consider how lethal he is against one of the hottest commodity in T20 cricket, leg-spin.

Making sure everyone bats where they fit in ideally is one of the toughest jobs especially in the context of this England side because there are so many talents but fitting Buttler in is one of their biggest concerns and his impact will have to be massive for England to win T20 tournaments.

Where Jos Buttler fits in despite some very significant numbers which support one cause is highly debatable in terms of the English side due to the problem of plenty they possess, but England needs to find a way very soon to ensure that their best T20 batsman doesn’t go down being underused because it can eventually end up haunting them. 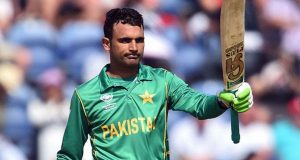 Fakhar Zaman: The Record-Breaker Who Knows The Importance Of Being Earnest!