Cricket Australia announced the fixture of the sixth edition of Women’s Big Bash League (WBBL 06). 59 matches will take place in each team’s home city. However, the venues might change later owing to the COVID-19 situation.

The upcoming season of the WBBL which is going to be the standalone tournament is scheduled to begin on October 17. The season opener will take place between Brisbane Heat and Adelaide Strikers at the Allan Border Field alongside three other matches.

Moreover, The WBBL 06 will be featured a three-week hub in Sydney and they won’t play in Melbourne before late November to deal with the ongoing challenges due to the Covid-19. Notably, three venues in Sydney – North Sydney Oval, Blacktown International Sports Park and Hurstville Oval will host the games.

Not only this, but WBBL 06 will also get more coverage. Out of 59 league matches, 26 will be televised whereas the remaining will be streamed on the CA app.

Let’s have a look at how are the squads shaping up for WBBL 06:

While the final squads of WBBL 06 are yet to come – the clubs are eyeing to lock down all their stars for the sixth edition of the league.

Adelaide will stick to their captain and WBBL 05 Player of the Tournament – Sophie Devine. While they had Windies star, Stafanie Taylor, from the Sydney Thunder, she played just two matches owing to a combination of international commitments and injury. Moreover, her replacement, Lauren Winfield, also failed to leave the impact.

With one of the competition’s best top-orders in their kitty, wouldn’t they try for a settled middle-order?

After winning back-to-back titles, many thought that Brisbane Heat would retain their winning combination.

However, with much surprise, only Delissa Kimmince has been retained. Australian all-rounder is on a multi-year deal. However, Australian stars Beth Mooney and Jess Jonassen, the domestic talents including Sammy-Jo Johnson and Grace Harris are all off the contract.

Not only this, but there is also a question on the leadership as well following the retirement of Kirby Short. With the presence of quality batters across the last two seasons, Short had hardly contributed with the bat but her leadership was unquestionable.

Her consistency as a captain is something which helped Brisbane’s recent success and it will be tough for any player to fill up the shoes as well.

However, they might reconsider their overseas options – New Zealander players – Amelia Kerr and Maddy Green. Both played key roles for the national team where Kerr, especially has the ability to turn the table.

After winning the title twice, they will surely try to win the WBBL 06 title too.

Hobart Hurricanes didn’t taste the success they would have despite having promising players in their first season including Australian stars Nicola Carey and Tayla Vlaeminck, alongside Belinda Vakarewa and Maisy Gibson.

However, Vlaeminck and Vakarewa were successful in WBBL 05 where both starred with the ball as well. But the batting department failed miserably despite the presence of England captain Heather Knight who finished 20th on the overall runs list.

Surprisingly, Erin Fazackerley, who scored fifty only once for the season has been signed for WBBL 06. But whether she plays or not remains uncertain as she has decided to step away from state cricket for 2020-21.

However, they have a great prospect with South Africa’s hard-hitter Chloe Tryon who had played with the stunning strike rate of 178 while batting in the lower middle-order. She might play more freely if she comes up in the order.

With the new season coming up, Hobart Hurricane would surely try to come up with flying colours.

The team provides local talented players more than others. While Jess Duffin, Georgia Wareham, Molly Strano, Maitlan Brown and Josie Dooley have been retained, Sophie Molineux is the other player they would try to retain.

Along with them, they would love to have Danni Wyatt and fast bowler Lea Tahuhu in their kitty. With all their inclusion, they appear to be in a strong position for WBBL 06. Notably, they will have a new head coach in Lachlan Stevens, who coached the men’s team on an interim basis last summer.

Stars are one of the weaker sides in the tournament. And currently, they have only five members who are contracted from their WBBL 05 groups. However, they will be starting afresh with Australia captain Meg Lanning who has confirmed her stint with the after her term with the Perth Scorchers.

Moreover, they have a new head coach in the form of Trent Woodhill. However, two Australia players – Elyse Villani and Annabel Sutherland – are secured with multi-year deals. While they wouldn’t get the service of leg-spinner Kristen Beams, who has retired, they have some young talents like Nicole Faltum and Alana King.

With the fresh squad, the Stars are eyeing for a fresh start as well.

WBBL 05 squad members who are off the contract:

Shelley Nitschke was the new coach for WBBL 05 who took the reins from Lisa Keightley who has taken over the responsibility of England head coach. However, captain Meg Lanning’s three-year deal has finished and the big question mark hanging over the team whether they will re-sign her or will some other player take her place.

Lanning has left a great impact already, taking the side to the semi-finals with the help of England duo Natalie Sciver and Amy Jones. Even Nicole Bolton too did well.

Lanning’s leadership was one thing that helped the team a lot. However, quick Piepa Cleary’s injury at the end cost them in the bowling department. Otherwise, they were a balanced side.
With the quality players, they would love to start from where they left.

Sydney Sixers are considered as one of the best teams in the WBBL. And it wouldn’t be wrong saying that they are in a better position than others. They are the only team that reached the final of the tournament every time apart from the last season.

Last season they had witnessed the shoulder injury of Ellyse Perry – one of the vital cogs of the team. Along with this, there were a few glitches which couldn’t help them reach the final.

Even if they wouldn’t get the service of South Africa duo – Marizanne Kapp and Dane van Niekerk owing to the global circumstances because of COVID-19, they have a solid squad with the likes of Perry, Healy, Burns, Ashleigh Gardner and Lauren Cheatle. With the main star players in their kitty, Sixers will begin WBBL 06 as favourites.

Thunder are in a turmoil situation after the retirements of veterans Alex Blackwell and Rene Farrell. Blackwell was the top run-scorer in WBBL 05 from the team while they have a star in the making in Litchfield. However, they need a strong middle-order to shape up a great playing XI.

While they might retain Stalenberg for the next season, Darlington who was their leading wicket-taker last season will remain with them for WBBL 06.

With a re-shuffled squad and excitement, all the teams are ready to get back into the action. It will be interesting to see the fight when the cricket has become limited amid the COVID-19 pandemic outbreak. 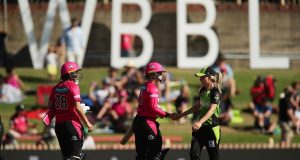 Chandhana Gogineni - November 30, 2018
0
Since it’s inception in 2015, the WBBL has gone beyond statistics that redefined and delivered much progress and prospects for a hidden talent to...