How often do we see an opening batsman batting with the sole intention to blunt the new ball in the modern era?

In the era where cricketers are judged by the number of runs they score, there is this cricketer from Surrey called Dominic Peter Sibley who is based out of Surrey, plays his county cricket for Warwickshire. There is so much to like about this bloke. The 24-year-old gritty customer broke into the English red ball setup with consonant performances for Warwickshire. He averages 41.91 with the bat that includes 15 centuries and 21 half-centuries.

He is a batsman who doesn’t frustrate the opposition bowlers with runs but takes the life out of them by grinding them. It is not rocket science that opening the batting is one of the most difficult jobs in test cricket and the significance of opening the batting increases in places like South Africa, England, New Zealand, Australia, and West Indies where the new cherry moves around to a greater extent.

England have struggled to find a perfect opening partner for Sir Alastair Cook during his playing days but seems like they have held on to one pair in Rory Burns and Dom Sibley who can serve the nation for many more years to come.

The old-school opener’s technique warrants a case study but let us not delve in it much. The importance of blunting the new ball is something that all the teams are slowly realizing, maybe once again.

The lower the strike rate, the better it is for an opening batsman. It just indicates how well the batsman has fared against the raging new ball bowlers, thereby protecting the middle-order who can take advantage once it goes soft.

That is what exactly Dom Sibley has done. He has unattended the balls (well left) like no other Englishmen have left outside off. He has 101 deliveries “well left” out of 372 balls that he faced for his 120 runs in which he managed to hit only 5 boundaries in the 2nd Test against the West Indies.

The monument he built might not have had swagger, but the bricks were cemented with caution. Sibley made his Test debut against New Zealand in Mount Maunganui. He showed good signs against the likes of Tim Southee, Trent Boult and Neil Wagner. He faced 63 balls for his 22 runs which may not be the best possible start to his test career but the composure he exhibited was visible and I still feel it’s visible as you’re reading it.

In the 2nd Innings, Sibley again faced 60 balls but once again failed to convert his score into a substantial one as he managed to get only 12 runs.

He was persisted with, for the 2nd test where he got out to a single-digit score but England were not ready to let go off the special talent and they decided to give Sibley another go, as he was picked for the South Africa tour. He made a solid 58 to begin the tour against SA XI in the practice game and eventually played the 1st test of the series but it was once again a disappointing performance from Sibley.

Dom Sibley could only manage to get 33 runs from 2 innings in the 1st test which South Africa won comfortably.

The world noticed what Sibley is capable of in the 2nd test against South Africa when he faced 311 balls in the 2nd innings for his 133 runs, something which Indian fans have more often than not witnessed with the likes of Rahul Dravid and Cheteshwar Pujara.

England were under immense pressure and the wicket was doing its bit but the South African bowlers couldn’t go past the defense of Dom Sibley as he remained unbeaten in that innings after having faced 311 balls.

The opener managed to return with decent numbers after the South Africa tour as he scored 334 runs in the 4 match test series. The most important thing to note is he faced a whopping 884 deliveries which gave the ECB all the more confidence to make him the permanent opener of the team.

England for once after a long time looked settled with their batting order and they came into the historic test series against West Indies after a long break with two gritty openers Rory Burns and Dom Sibley. But the game started on a rather disappointing note for Dom Sibley as he shouldered arms in the very 2nd over of the game as Shannon Gabriel dismissed him for a duck.

And the cricket experts and fans started to raise questions regarding his unorthodox technique but in the very next innings, he scored a brilliant half-century after having faced 162 balls to help his team to set a respectable total to Windies.

Cometh the 2nd test, England had to make a decision to drop either of Zak Crawley, Dom Sibley, and Joe Denly to welcome their captain Joe Root who missed the first test and they once again decided to persist with Dom Sibley.

On overcast conditions where the ball was doing all the things and with his team already being 1 down, Dom Sibley showed what he is made up of. The kind of knock that would have made the legendary Sunil Gavaskar proud. He judged the length perfectly and knew where his off-stump was and presented an absolute masterclass with a century and eventually departed for 120 runs from 372.

The game that eventually won by England will be remembered for Stokes‘s magnificent heroics with both bat and ball but it was that man Dominic Peter Sibley who weathered the storm on the 1st day of the test match that shouldn’t be forgotten in the longer run.

England seem to have found an ideal opening combination in Burns and Sibley. Should they apply themselves consistently, it won’t take a young bunch too long to script their own history in red-ball cricket. 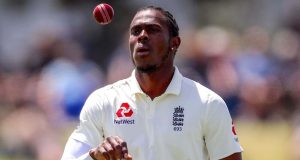 Dev Tyagi - November 27, 2019
0
Jofra Archer, a few hours back, admitted and confided honestly in the cricket-loving public when he shared he had moved on from the racial...