Women’s cricket has come a long way in every way – be it an increasing number of games, pay scale, or getting the record number of spectators in a live game.

Now another feat has made to what is an ever-growing hat of new firsts. ASICS recently unveiled the first-ever cricket shoe made specifically for women, designed with the help of Cricket Australia as well – 350 NOT OUT FF.

How many of us- let it be asked honestly- think of a cricket shoe specifically designed to add functional advantage for women cricketers?

For example, take Alyssa Healy who is going to wear a cricket shoe that fits her for the first time in 13 years. It’s not because the right-hander has odd-sized feet, or a disinclination to try on footwear before purchasing.

There was no cricket shoe specifically designed for women.

But ASICS Australia have made the change.

This summer, every female player will get the chance to wear the 350 NOT OUT FF, developed with the help of the Australian women’s team’s physiotherapists and players as well.

So far, female players had to buy shoes designed for male players which are larger and broader than theirs. And, the pace bowlers had to wear up to three pairs of socks at once so that they could fit in those shoes. But that led to knee, ankle and foot problems.

Introducing the Women’s 350 NOT OUT FF – the first cricket shoe made for females. -> https://t.co/WmXK5LXa6c

However, Alyssa Healy took a different way as she would take a normal women’s running shoe, used to remove the bottom and add spike in it.

“It’s really cool,” Healy said of the 350 NOT OUT FF when speaking to cricket.com.au. “Some of us had never been able to have a pair of spikes because they never came in small enough sizes.”

“ASICS took that on board and started to make their batting shoes in smaller sizes for us tiny-footed people (in recent years), and now they’ve gone one step further and made a female-specific shoe,” she told.

She further added, “It’s exciting for us to have been a part of it, and I’m excited for all the young girls out there who can walk into a store and order a female cricket shoe.”

The problem was first addressed by former Australia team physio Kate Mahony who reached out to ASICS for a solution.

“It’s something that we know is going to look after our feet because we’re in them for long hours of the day and the feedback has already been great,” Healy said.

“I’ve been wearing mine at training and they fit seamlessly and they’re so light and comfortable. I’ve given a few pairs to some players in the NSW Breakers squad and they’re loving them too,” the flamboyant opener shared.

She again added, “Hopefully we’ll see less of those injuries and more time on the park for (the fast bowlers) in particular. They’re a great colour, a really neutral colour, they’re not a bright pink or anything. They’re a nice light blue which fits in really well with our NSW uniform but I’m sure everyone else will enjoy them as well.”

However, Mahony left CA and joined the New South Wales Institute of Sport in early 2019 and her replacement Kate Beerworth started where she left off.

The new shoe had to go through a lot of testing across the many facets of the game, including various fielding positions and movements, and on various surfaces, before it received the approval.

“It’s another significant step in the professionalism of the women’s game,” Beerworth told cricket.com.au. “Players always find a way and unless they’re exposed to something different, they make do.”

“But the feedback from players like Healy and Tayla Vlaeminck and others from Cricket NSW, is that once they put a shoe on that’s a different fit and a narrower fit, they go ‘okay, right, this is better’,” she added.

“Historically, female athletes were often seen as small men, but now there’s the demand for female-specific support services in the game. That is driving change in improving equipment that’s actually specific for female anatomy,” she again said.

“Often the female foot is narrower in certain parts and when players are wearing a shoe that is designed for the male foot, they can slide around in the shoe, and that can lead to things like blisters, nail irritation and it can contribute to foot and ankle pain,” she concluded.

However, Beerworth thinks the shoe will look after the players’ safety and comfort and also improve performance.

“From a performance aspect, if your foot is sliding around, you’re not 100 per cent confident in the stability of your foot as it hits the ground,” she said. “This will only improve their confidence when they hit the crease.”

Just imagine, if fast bowler Tayla Vlaeminck bowling at 120-plus km/h didn’t scare enough the batters by now, how dangerous she will be wearing a shoe that fits perfectly and gives that extra edge with the grip?

In that regard, can we expect an even more threatening pace and action from the likes of Katherine Brunt and the company? 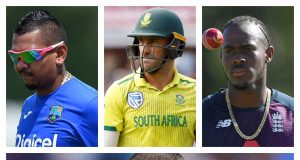 Suvajit Mustafi - October 20, 2021
0
The T20 World Cup 2021 is a platform that brings together the galaxy of the most extraordinary talents...