MS Dhoni tampers with the heart-rates of people. He did that for 15 years when he was batting in the middle in a tense chase and now, one post on Instagram from him and the billions of heart-rates were affected again.

A four-minute, seven seconds video has ensured that the world is sent into a frenzy. The cricketing fraternity has absolutely exploded. All he did was one video that he posted on Instagram and back he was in his bubble. And the world is back talking about the enigma, the legend, the man, Mahendra Singh Dhoni.

Having spent nearly 15 years in the India blue, donning the number 7 jersey and after one year of speculation, the 39-year-old Ranchi-born wicket-keeper batsman and former India captain has decided to hang up his boots.

The announcement came just like his Test retirement. Absolutely no one was watching, with the IPL around the corner, no one expected it either (well, there were murmurs all around for a year now) and bang, he’s gone. No big farewell games, no fuss, just a simple thank you message along with that four-minute, seven seconds video, “Thanks a lot for ur love and support throughout. from 1929 hrs consider me as Retired”. This has become a habit for Dhoni, drop the bomb when no one sees it coming.

From coming in at a time when India were experimenting with wicket-keepers to absolutely nailing down his spot and being almost irreplaceable, the legend and the enigma of Dhoni were built. And he was an inspiration to the youth of India, to the ones coming from the small towns, to the ones who dared to dream but couldn’t fulfill them.

Dhoni was a phenomenon that donned Indian colors for 15 years, but it felt like an eternity. And now, it will feel like an eternity to fill those giant shoes. He was a complete package that came along with bat, gloves, as a leader, guide, mentor, and everything you could ask for.

It’s not just about the runs, wicket-keeping, or the records that define Dhoni, it is the sheer belief he instilled in people all around the globe. No cricket game was ever finished till Dhoni was out there in the middle (India lost just two out of 50 ODI games when Dhoni remained not out). Even till the very end, in what turned out to be his last international game, the 2019 World Cup semi-final, India believed they could win from 5 for 3 largely because of one man. And that defines the career and the aura of Dhoni.

He was a mastermind when he was on the field. Very few players could read the game better than he did. Cool and calm even in the biggest of pressures in the biggest of matches, Dhoni could control almost every situation.

Having started off as a swashbuckling wicket-keeper batsman who could smash it to all parts of a cricket ground (with a lot of unorthodox-ness in everything he did), Dhoni went on to become a smart, tactical genius as a captain, batsman, and a wicket-keeper.

Be it with the bat, gloves, or as captain, year after year, Dhoni scaled new landmarks and was constantly on the button to take Indian cricket to new heights. That’s all that mattered to him. He could’ve been India’s greatest No. 3 could’ve racked up great numbers but he didn’t. He understood the importance of finishing games and the art of batting at No. 5, 6, and 7. It was Rahul Dravid who once said that India can find as many No. 3 or top-order batsmen as they want but no one could finish games like Dhoni did. And the rest is history as the legend of Dhoni just developed.

Be it as a player or captain or even as a wicket-keeper, he constantly evolved. Moreover, Dhoni knew how to turn a low and all the hate into a peak and big success in no time and get the world to falling in love with him again.

Be it from the lows of his debut series to the peak of Vizag and Jaipur or the 2007 World Cup shambles to the 2007 World T20 (and this one extended till the 2011 World Cup) or the horror 2011-12 tours to England and Australia along with the England debacle at home in 2012 to the Australia 4-0 thrashing or the IPL betting scandal in 2013 to the 2013 Champions Trophy win and the Celkon tri-series win in West Indies or the struggles of his batting in 2018 to the match-winning guide in 2019, Dhoni knew how to defend himself from a low and shoot back to the top.

Between two runouts, one (on 23rd December 2004) that disappointed a youngster on debut and the other (on 10th July 2019) that broke millions and millions of hearts at the end, Dhoni’s legacy was built. One that will be etched in memory forever.

Dhoni is not entirely done yet. He will continue to don the Yellow jersey for the Chennai Super Kings (CSK) in the Indian Premier League (IPL). It is the Dhoni of Blue that has signed off from international cricket and he did it in his typical fashion, without any drama, without too much fuss, with just one Instagram post.

Just like that, an icon, a cricketing giant, a finisher, a captain (you can continue adding adjectives as they might not end) walks away from international cricket. The name Mahendra Singh Dhoni will resonate all over world cricket for many many years.

He came with a flair of his own, he was spectating and seeing around like a hawk, he conquered like a King and just like that, he bid adieu without any fuss going off into his own little bubble once again. 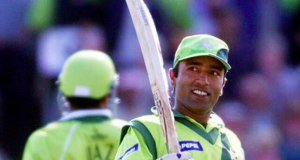