When sport and politics intertwine, the result is invariably a 5-letter word called chaos.

As chaos hits an organization, clarity of mind, transparency and trust tender in their resignations even before people do.

One such organisation marred by chaos is Cricket South Africa.

The saga started last year when Cricket South Africa reported a loss of around 200 million rand, for the year 18-19, owing to not so profitable inbound tours from Pakistan and Srilanka.

As we all know, the cash cows for all teams for incoming tours are India, Australia and England because of the massive television revenue and sponsorships.

At the same time, then CEO of CSA Thabang Moroe decided to dismantle the domestic 6 franchise set-up and only have a 12-team provincial set-up to curb the losses.

South African Cricketers Association opposed this ruling as that would mean a loss of jobs for about 70 cricketers, as the 12-tier system was semi-professional and 6 franchise was one above that.

So, with the dismantling of the 6-franchise system, the franchise players would play in the semi professional system and as a result the semi-professional cricketers would lose their jobs.

Hence, the first instance of chaos happened, when SACA (South African Cricketers Association) opposed CSA for this decision, by sending them communication to no reply and as a result had to take CSA to court.

The second instance of chaos was in December 2019, when for no reason Thabang Moroe, decided to remove the accreditation of 5 senior journalists and having faced a media backlash for this decision, reinstated them a day later.

With this confusion at the leadership table, 3 board members at Cricket South Africa resigned and 6 were suspended.

As a result, owing to a credibility hit, the biggest sponsor of the Proteas, Standard Bank decided not to renew their contract post March 2020, the time it expired.

December 2019 was a complete circus at CSA, amid no trust talks, lack of transparency and complete chaos with people leaving, CSA facing SACA in a court battle, sponsorship backouts and random suspending of the accreditation of journalists.

With the England inbound tour looming at the time, CSA had to get its act straight and the President Chris Nenzani decided to temporarily suspend CEO Thabang Moroe with full pay for 6 months and appoint Jacques Faul as the new CEO albeit in an interim capacity.

Faul and President Chris Nenzani further to build some lost credibility appointed ex-skipper Graeme Smith as the director of cricket, who if I may add, refused the role till Moroe was in charge owing to trust and credibility issues.

The England series went on as scheduled, though the Proteas lost the test and T20 leg, some credibility was rebuilt for CSA and cricket in South Africa overall.

What’s more interim CEO Jacques Faul, managed to mend ties with SACA and the court battle was resolved with not disbanding the 6-franchise structure.

Further to that, Faul also announced a profit between 50-80 million Rand for the year 19-20 to curb the loss of 200 million rands made in the year before that.

As things were looking up with trust and transparency in the board, the COVID pandemic hit us all in March this year and affected cricket too.

Lucky for South Africa, it was off-season for them and Jacques Faul ensured no pay cuts for any of the cricketers.

Alas, when things look better, uncertainty had to hit again and this is what happened at CSA recently with the Black Lives Matter movement.

Gaining momentum globally, CSA was not to be spared by BLM, with ex and present colored and African cricketers the likes of Makhaya Ntini, Ashwell Prince, Lungi Ngidi, and others voicing their opinion on cricket still having a race divide.

This led to the chaos resurfacing with Smith and Boucher’s appointments as white people in senior roles being questioned.

Adding fuel to fire, Thabang Moroe’s suspension still has no result with the inquiry just getting delayed and bearing no fruits, denting CSA’s credibility further.

Moreover, owing to this uncertainty galore, Jacques Faul will leave his role as the interim CEO, come September 15th

With Thabang Moroe’s future still unclear and if a new CEO is not appointed till Sep 15th, Cricket South Africa will again become headless chickens and the chaos is all but certain to increase.

Amid all this chaos and uncertainty, there is still a silver lining though, with DOC Graeme Smith in a recent press conference talking about his commitment to cricket in South Africa, bringing cultural inclusivity to address transformation and the desire to work with the new CEO on the 2 pillars of trust and transparency.

He also ably addressed all the allegations ex wicketkeeper Thami Tsolekile had accused him off, with a long twitter reply when Thami was not picked for the Proteas in the 2012 English tour despite being the back-up gloves man to Boucher when the new South African coach got injured.

Smith wanted the strongest team to represent South Africa and Thami did not figure in the scheme of things with a modest first-class average.

With de Villiers taking the wicketkeeping duties the Proteas beat England in the series and as a result became the no. 1 team in test cricket.

What’s more, CSA has also organized a cultural integration camp at Kruger National Park for all the Proteas. This will certainly help in addressing race as a factor and one can hope that going forward only the strongest teams will represent the Proteas inclusive of race and transformation.

As a protea fan, I always hope for a strong structure and a strong team devoid of politics and inclusive of all cultures.

Well if that’s hope or a certainty, only time will tell. 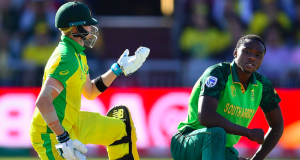