Much of the action in all these months where all sporting activities were cut was seeing reruns of past games and contests. Ditto for Soccer, same for Tennis, Rugby and also for Cricket, the very sport we can’t imagine our lives without. Programming, in these lockdown days, anywhere on earth, was mostly seeing past games all over again.

With an absolute dearth of live cricket, the fan must have wondered when might sporting action return in the women’s arena, a fantastic response to which was served all thanks to the recently-concluded German women’s tour of Austria T20I series.

Boy, what a pleasure it was to finally get our live dose of the exciting women’s game, and the kind of form Germany demonstrated, the only thing one could say was where was cricket of this high class and value all this time?

But there were some changed norms that guarded the recently-held Germany vs Austria International T20 contests in that all games were only contested with the players and umpires and the team dugout in attendance.

Part of the reality of our contemporary world which favors the bio-secure environment which has no fans in attendance for a live cricket game.

Strange as that may have seemed initially, our cricket-devoted hunger palate was hardly left craving given the standard of cricket both teams displayed, Germany coming out all guns blazing in what was an important tour to neighboring Austria.

Anything that the loving fan may have desired from a T20 series featuring two important forces of our contemporary world was on offer- a flurry of runs, amazing partnerships, dedicated fielding, all of which gave fans watching live proceedings from the comfort of their homes, a lot to cheer about.

Having said that, let’s have a look at some records set in this widely-watched series that was streamed online:

Despite being ranked 27th, Germany came into the series and left it as true victors and icons.

It was only in the month of February, in the pre-lockdown period where the team emerged triumphant blanking Oman comprehensively in a 4-nil triumph.

Although the last that they played was in a quadrangular series a year back in France,  Austria, it could be said may not have expected such an emphatic assault as what they found, sadly playing at home.

While Germany were clear favorites, their all-round performances proved just why they were ranked so highly.

On the other hand, Austria’s struggles were clearly visible with the team often looking clueless. They couldn’t take a wicket in three matches. Just how often does such a thing happen even in the game’s shortest format?

Even, they couldn’t bat their full 20 overs. Apart from their captain, no one could live up to the expectations.

In the series, Germany scored a total of 738 runs from their five innings and lost only five wickets at 8.38 RPO, whereas Austria managed 301 runs at only 3.36 RPO from as many matches losing 47 wickets as well.

Where it came to German batting, a key strength of the side, then the series against Austria, it wasn’t hard to see, was the openers’ day out in the serene green setting. The likes of Christina Gough, Janet Ronalds, Anuradha Doddaballapur, Sharanya Sadarangani, and Anne Bierwisch were in blazing form. A concoction of different combinations across the T20Is and the attack mode of the women with the bat in hand did the trick for the tourists. Thanks to their prowess with the bat, Gough, Ronald, and Doddaballapur, in that order, finished as the top three run-getters in the very series where it wasn’t that hard to see Austrian batters struggling.

Gough’s 62-ball 72 in the first game was a truly special effort. The German team’s batting only went from strength to another with Ronalds smashing a century in 2nd contest. Captain Doddaballapur and Sadarangani, were also involved in a key unbroken opening stand that enabled Germany to have their nose ahead of Austria in a contest, this being the 3rd T20I. Gough again came in the limelight after smashing a century in the fourth match and became the second centurion of Germany after Ronalds.

It wasn’t hard to note the lone bright star for Austria who made all the difference, albeit waging a lonely battle. The captain and star all-rounder of the famous Western Europe cricketing force emerged with runs, bowled economically, and even managing to stay unbeaten against a side that was looking too daunting for her Austria’s comfort at the end.

It wasn’t too surprising, frankly speaking, that Zepeda’s 38 runs from 3 games were the most an Austrian batter managed.

What Records were set in the series?

Surely, when you dominate the opponent with a 5-nil margin, you are bound to have set a flurry of records, let’s explore some hereunder:

In the First game, Germany produced a stellar opening stand, with batter Janet Ronalds notching up Germany’s first T20I century. What a milestone to cherish- since scoring a fifty in the game’s briefest format is, on some days, out of reach. Ronalds’ 105* from 74 balls, was ably supported by the 66* by opening batter Gough; the duo’s effort boosting Golden Eagles to 191/0.

This magnificent unbeaten 191-run stand was the fourth- highest in all of the women’s T20ls all these years. Speaking of the team total, the tally became the highest in any T20I without having conceded a wicket. Magnificent Germany right there for you.

You’d be wrong to think that in the largely batting-determined series, the bowlers had a quiet outing. In fact, far from it, as the 15-year-old spin specialist Bargna picked up a daunting 5/9 from her full four-over spell to record Germany’s first-ever fifer in a T20I. How’s that for some economy?

Germany were successful at restricting Austria for merely 54 in the 3rd game of the series. But the lion’s share of that sensational bowling effort belonged to Anne Bierwisch’s sensational hat-trick, which was truly special in that it was the first by a German bowler in any T20 international.

The Fourth game too had something special in store where all thanks to Ronalds’ and Gough’s stand, it was business as usual for the fearsome German batters, who put on yet another century run stand, Gough raising the bar with an undefeated 101 while Ronalds compiled 68 as the duo surpassed their record-breaking stand.

With all these records in the emphatic series, it wouldn’t be wrong to say that Germany stamped their authority in world cricket and the coming months shall be riddled with an absolute thrill to see what more can the fearlessly rising cricketing power bring to the fans. 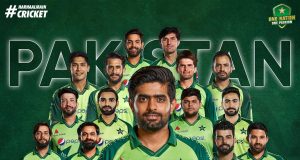 Pakistan Aim For The Money Shot With The Power Hammer Heading...

Babasish Nanda - October 14, 2021
0
The latest transfer of power in the Pakistan Cricket Board (PCB)  is dramatic but can it change the...