Corruption, resignations, racial divide, and a foreseeable future devoid of sunshine is the sad truth about cricket in this beautiful country.

As a die-hard Protea supporter, it really disheartens me to see cricket go this south owing to an uncertain administration.

Having said this, amid all this negativity and uncertainty, lets together breath some fresh air by walking down memory lane to reminisce a series down under which surely would bring a smile to the face of every South African supporter.

It was 20 years to this week, in 2000, when South Africa played Australia in a first of its kind 3 match ODI series indoors.

Yes, that’s right, the venue was the Colonial Stadium, now known as the Docklands Stadium in Melbourne.

After the evolution of day and night cricket, this was the next innovative offering with cricket being played under a closed roof.

To commemorate an occasion as big as this, it was only fitting to see one of the better rivalries in world cricket go at it much like Batman and Joker or Superman and Lex Luthor and if you are a Transformers fan, then Optimus Prime and Megatron.

Let’s revisit how the 3 matches unfolded.

With a cricketing first of a match being played in an indoor stadium, the players really didn’t know what to expect amid a different lighting system moving away from the traditional pylons and a pitch that was never exposed to natural light.

Shaun Pollock won the toss and put Australia into bat and boy was South Africa in for a whopping!

Having lost the first 3 wickets, of the famed trio of Mark Waugh, Adam Gilchrist, and Ricky Ponting just for a paltry 37 runs, Steve Waugh and the ever-reliable Michael Bevan put on a stand of 222 runs, 2 shy from eclipsing the highest partnership ever for Australia by Dean Jones and Allan Border at the time.

What’s more? Both these stalwarts also registered their tons in a massive effort of putting up a skyrocketing total of 295.

In reply, the Proteas, unfortunately, were never in the chase losing wickets consistently and ended up just reaching 201 for the loss of 7 wickets.

For a second time Shaun Pollock won the toss but this time he decided to bat.

With 50s from Jonty Rhodes and Mark Boucher and an important 37 from all-rounder Andrew Hall, the Proteas managed to put up a competitive 226.

The Australian reply started in an encouraging manner with Mark Waugh and Adam Gilchrist putting on 78 for the first wicket.

The Kangaroos looked comfortable to chase this target down for the major part of the innings before Klusener and Boje through a spirited bowling effort managed to put the brakes on the men in yellow and green.

What’s more, with Australia needing 14 of the last 2 overs, Shaun Pollock gave the ball to Andrew Hall with his reputation of being a good death bowler.

Wow, did Andrew live up to this reputation by getting Michael Bevan caught behind by Mark Boucher and then clean bowling Steve Waugh and only conceding 1 run in the second last over.

Australia still needed 13 runs with captain Pollock taking the reins for the last over.

Warne hoisted Pollock over the covers for a boundary on the first ball, 9 to win of 5, a single of the next, 8 of 4 now, Gillespie on strike, deflected it down the leg past Boucher, another boundary, now 4 of 3, Gillespie hit the ball to Pollock’s left and started for a run albeit Pollock successfully running him out. Too close for comfort, 4 of 2, Warne on strike and he hit the second last ball down to the third man which seemed to go for the fences before it was kept only to 2.

2 required off 1, Warne hit it straight and the ball deflected off the non-striker’s stumps to let Warne scape through for only 1.

The match was a tie, the second between these 2 southern hemisphere giants after the infamous 1999 World Cup semi-final and South Africa were still in the series thanks to this nerve-wracking last over.

Andrew Hall for his crucial exploits with the bat and ball was adjudged man of the match.

Having not started well, with the top 4, the likes of Gary Kirsten, Andrew Hall, the great Jacques Kallis, and Daryll Cullinan all in the hut for a measly 19 runs, the Proteas were in trouble before Lance Kluesner and Neil Mckenzie steadied the innings.

With lower-order contributions from captain Pollock and Nicky Boje, South Africa managed to put up a modest yet competitive total of 206 for the loss of 7 wickets.

Australia in reply never really looked the part with only Gilchrist scoring half a ton. Having said this, they did come in striking distance of the target but the Proteas on the day were just too good, thanks to a much-spirited effort by Nicky Boje taking 2 wickets.

He was judged the Man of the Match for his batting and bowling pursuits.

With the Proteas winning the decider, it was only fitting for the spoils to be shared between these 2 southern hemisphere cricketing superpowers.

Truth be told, for an occasion marked with such innovation, it was truly a delight to see quality cricket scale new heights with the series going right down to the wire.

Australia South Africa contests have always been one for the ages and ironically the last time international cricket was played at this ground was also an Australian South African fixture in February 2006, with the Kangaroos claiming the cherry then.

While as a cricket lover, innovations in this beautiful game always excite me, but as an ever-bigger Protea fan, the impending need of the hour is for Cricket South Africa to get its house in order.

Even the almighty would agree, when the Proteas are strong, world cricket is strong. 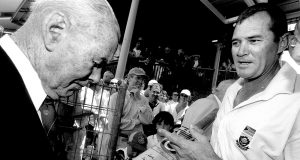 Pat Symcox: Examining An Important But Forgotten Career Of The Dangerous...

Dev Tyagi - April 14, 2020
0
There will always be careers that’ll be remembered for their sheer longevity. The site of a teenaged Sachin is just as precious as the...