You look at Ishant Sharma and it’s hard to imagine that he’s celebrating just his 32nd birthday. It seems like he has been around forever.

97 matches, 297 wickets, an average of 32.39, a strike-rate of 61.1 and 11 five-wicket hauls. That’s barely three wickets a Test match. These are not the numbers a bowler would want to have after playing for more than 13 years.

There was a lot of promise early on. His famous spell to Ricky Ponting in Perth back in 2008 showed what he can do and if he is on song, he will make even the best dance to his tunes. However, the early hype died down soon and right from the outset, the Delhi lad became a workhorse who could keep bowling on and on and on, holding one end up. He was someone who could run in all day and hit the deck hard.

There were times when Ishant went out on the attack and reaped rewards. Be it the Bridgetown spell in 2011 made a mockery of the West Indies batsmen or the one in Wellington in 2014 where he had New Zealand hopping around or the famous Lord’s spell where he blew away England with a barrage of bouncers to lead India to a famous win, Ishant has had these burst where he blows away the opposition. But for the most part of his career, Ishant was India’s premier workhorse.

In fact, until 2017, that was his role. Be it home or away, he pegged away from his end, keeping things as tight as possible and building as much pressure as he can. He used to beat the bat often but the wickets tally often didn’t reflect how well he bowled.

However, things changed in 2018. He started bowling a lot fuller and started getting the ball to move back into the right-hander prodigiously. He even developed the one that straightens and goes away from the right-hander. From 2018, Ishant started to trouble the batsmen a lot more and has looked threatening almost every time he’s come on to bowl.

The Delhi fast bowler has been a big part why India have been successful in Test cricket over the last two or three years. He has led the pace attack beautifully.

Since the start of 2018, his numbers are just mind-boggling and he has bowled better than ever in his career. From January 2018, his average and strike-rate, both are the third-best among fast bowlers who have taken more than 30 wickets and played more than 6 matches. He has taken 71 wickets at an average of 19.14 and a strike-rate of 41.7 in this period.

And those are numbers better than the likes of Pat Cummins, Kagiso Rabada, Jasprit Bumrah and many others. Be it home or away, Ishant has become a wicket-taker. Barring the series against South Africa at home, Ishant averages under 25 in every series that he has played.

When you talk about the best fast bowlers of this generation or even the best fast bowlers going around in world cricket at the moment, Ishant Sharma’s name barely comes up. However, he is at the peak of his powers and is bowling as good as anyone else in the world at the moment. His pace is up, he is moving the ball prodigiously and that too both ways, his lines and lengths have been impeccable.

And all this has come after one stat that would’ve made any team, captain or selector drop a fast bowler. After Ishant had completed 50 Test matches, he had the worst average (38.46) among fast bowlers who have played at least 50 Test matches. In fact, many believed that his career was all but over as well and there was nearly no way back into the Test team.

But now, he is on his way to becoming one of the greats to have played Test cricket for India. From being the workhorse to the wrecker-in-chief, Ishant Sharma’s transformation has been a remarkable one.

And we’ve often seen fast bowlers wear out and fade away after the first half of their careers. More so, if they’ve had average results for nearly a decade. However, it wasn’t the case with Ishant Sharma. He got better as he grew in experience, has evolved into a bowler who cannot only hold one end up in any conditions but also emerge the chief wicket-taker.

Also, apart from Kapil Dev who played 131 Test matches, no other Indian fast bowler has played more Test matches for India than Ishant. Playing for a staggering 97 games is a testament to his fitness. And that is one thing that isn’t said enough. While he has had his share of injuries, he hasn’t had as many as some of the other fast bowlers. The Delhi lad is supremely fit and since 2010, he has never played less than five Test matches in a calendar year.

Currently, only Dev (434) and Zaheer Khan (311) have more wickets in Test cricket than Ishant in Test cricket among India fast bowlers. There is absolutely no doubt that the tall lanky pacer from Delhi will go past Zaheer’s tally of 311 Test wickets. 434 might be a bit too far off. But you never know. Ishant has found a new life and a fresh set of wings in the second half of his career. He is wreaking havoc almost every game he plays.

In 2020, he wasn’t fully fit yet he played the first Test against New Zealand, and just like that, he picked up a fifer. This is what Ishant has transformed into. He is as vital as say a Virat Kohli or a Jasprit Bumrah in this Indian Test side at the moment.

When India travel to Australia later this year, it will be Ishant’s fifth trip down under as a Test match bowler. He has already toured England, South Africa, and New Zealand three times each. And yet, Ishant is just 32.

There has hardly been any bowler who has made as many tours as Ishant has which speaks volumes about how the lanky pacer has evolved himself over the years. After James Anderson and Stuart Broad, no other fast bowler has as much experience as Ishant.

So far, it’s been a career that has moved up, down, up, down, and now is constantly on the rise. Ishant Sharma is one of India’s most unheralded fast bowlers. It seems like it was an eternity ago that he walked into the Test side to face Bangladesh in 2007 as an 18-year-old tall lanky pacer.

Now, it feels like an eternity before he bids adieu. Ishant Sharma has a lot of cricket left in him. he is going to be an important cog in the Indian team in every Test series they play. Be it Australia later this year or England next year, Ishant is going to play defining role in India’s success, just like he has over the last two to three years. 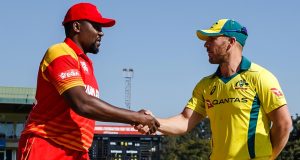 Excited For The Upcoming Australia Versus Zimbabwe Contests? Well, Postpone The...

Shruti Banerjee - June 30, 2020
0
Another day, another dull news regarding the sport we so love. Just when you thought the other important series following the West Indies against...