The West Indies cricket board will be more than happy to have pulled off such an event like Caribbean Premier League amidst the crisis. Though several players pulled out of the tournament at the last minute, all the teams have managed to assemble a decent squad to compete.

There is no doubt this tournament was a shining light in an otherwise tragic year so far. The fact that this tournament acted as a perfect warm-up to the greatest league in the world, the Indian Premier League, makes it doubly special.

The fans have been treated with some enthralling individual performances In this year’s CPL and let me try to take you through the consistent performers in this year’s CPL.

The dynamic Kiwi opener loves the CPL, doesn’t he?. He just piles up runs whenever he makes an appearance in Caribbean Premier League. He has scored 316 runs in this tournament at an average of 35 runs per game. This may seem like middling returns but when you consider the wickets that were on offer, this tally tells you about his adaptability and what an all-round player he can be. He has prolific records in the last 2 years of CPL as well. In 2019, he scored 374 runs at an average of 36, and in 2018, he piled up a whopping 457 runs at an average of 41.

All these performances have been constantly ignored by his national team, New Zealand. It is only a matter of time that this 23-year-old South Africa born player goes on to rock in the international arena for New Zealand as well.

The Junior Bravo never misses an opportunity to stake a claim for him in the national side. When he made his debut in the 2009-10 season, he was seen as one of the greatest potentials who could rule the cricketing world for years to come then but the potential remains an unfulfilled one to date.

There is never a doubt about his technique or ability to play any type of bowler and it was visible in this year’s CPL.

Though southpaw have difficulty in hitting balls with high pace and the balls that turns away from him but cricket is all about waiting for the right opportunity, isn’t it?. The younger Bravo did the exact thing in this year’s CPL where he waited for his match-up to pounce on it.

He aggregated 297 runs in this tournament at an eye-catching average of 59 including the match-winning innings against St Lucia Zouks in the finals where he scored 58 runs from 47 balls that included 6 maximums. He is an amazing spin power hitter and with the next WT20 in India, he can be a solid back-up to that West Indies squad.

Who would have thought that a test specialist like Roston Chase would be one of the standout performers in CPL?. He was the backbone of the runners up, St Lucia Zouks.

He held the batting order together with his strike rotating abilities and the way he played around other big hitters in the team was alluring.

He managed to aggregate 225 runs at an average of 37.5 with a strike rate of 110. The elitists might look at that strike rate to pull him down but he played some important innings in the context of the game where this strike rate was just enough for them to buy some victories. Do you remember the strike rate of the 2 time WT20 hero Marlon Samuels in T20Is?.

One important aspect in modern-day T20s is the diminishment of finger spinners who could turn the ball away from left-hand batters. Roston Chase adds value to that department too. He picked 9 wickets at an economy rate of 4.65 which is quite unbelievable even if you consider the type of wickets that were on offer, these returns are brilliant, to say the least.

Well, his name was always on the cards, isn’t it? The sheer impact Kieron Pollard has had on the team as a captain, as a batsman, and as a bowler in the latter half of the tournament is something that no one can match. The big guy has shown why he is one of the best T20 players going around in the world.

His inning against Barbados Tridents where he scored 72 runs from just 28 balls with 9 sixes and 2 fours coming in at #7 is something that remains as the top T20 knock as far as this year is concerned. He literally snatched the victory from the jaws of defeat.

Before talking about his batting, his match-winning spell of 4 overs for 30 runs and 4 wickets on the biggest stage in finals came in as a huge add-on to Kieron Pollard’s T20 value as a player. He is a potent bowler and has been under bowled in recent years but he has started taking his bowling seriously and his returns were an example of how good a bowler he can be.

Another Kiwi makes this list not with the bat but with some extraordinary numbers with the ball this time. His waspish pace with a short run-up confuses the batsmen to a great deal.

He was the standout bowler in this competition in spite of bowling all the crucial and difficult overs for his side, he bolsters an ER of just 7.75. Though he was ordinary in the super smash last year which saw him out of the New Zealand T20 side, this impressive CPL performance will surely place him under the selector’s radar again.

He has got good pace, hits the deck hard which is the trend in the modern-day T20s and bowls a neat change of pace without overusing it. Not to forget about his pace hitting prowess with the bat. He can be a true utility cricketer in the T20s.

The president from Afghanistan is the 3rd member from St Lucia Zouks who finds a place in this list for the consistent performer, quite staggering is it?. The term punching above their weight is something that perfectly suits Darren Sammy led Zouks. Each and every member of his team played a crucial role in this year’s successful campaign for them where they reached finals by overcoming some of the heavyweights.

The former Afghan captain did what he does best in T20 cricket. His exploits with both bat and ball were enough for him to enter this list. He was the designated finisher for Zouks which is one of the difficult jobs in world cricket and he did that with decent effect. He scored 156 runs and picked 12 wickets at an Economy rate of 5.10. He was giving the control to Darren Sammy with the ball. He bowled his majority of overs in power play and restricted the opposition batters to nothing.

He rocked the stage with his accurate line and length for TKR. He played 7 games and picked 10 wickets at an average and ER of 15 and 5.5 respectively. He is a traditional slow left-arm orthodox who can serve West Indies in the red ball cricket as well who uses his arm ball to good effect.

As West Indies are struggling to find a spinner in whites, Akeal Hoesin can be the answer to that. He uses his arm ball to good effect and keeps the batsmen guessing with his pace variations. He has a solid base at the crease and has everything right about his bowling. He is a handy lower-order batsman as well. One to look out for in the future. 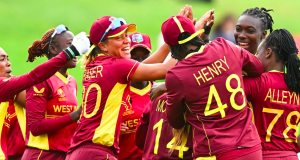 Windies Women Hold Their Nerve Against Defending Champs England In A...

Chandhana Gogineni - March 9, 2022
0
They came into the World Cup with perhaps scant expectations of winning games. And now, having won two in two, the Windies...