On the eastern belt of Afghanistan- one of the most noted Central South Asian countries- lays the province of Nangarhar. Situated little over three hours from Kabul, the often militant-afflicted region is largely agrarian in its output.

Noted for its poppy cultivation, the 1,50,000 strong province has a common passion. It’s a sport invented by the British but honed meticulously by the average Afghan who sees in it a respite from the Taliban-hit taxing reality.

But of these many individuals, one Afghan has risen to rub shoulders with the greats of modern cricket.

Today, as Rashid Khan turns back to reflect on where he emerged from, he carries the hopes of 3.7 crore people and thus, countless Afghan households that credit him for taking Afghanistan to worldwide attention in a sport where common heroes are either Indians, Australians or the English.

Truthfully speaking, it’s one thing to be a young promise in the sport but something other to constantly grow your cricketing graph, year after year.

And yet even subliminal to think that with age and fitness on your hands your best days are still ahead of you.

While cricket in an age obsessed with brand endorsements and fantasy gaming may link Rashid Khan’s success to his multi-crore signings with slam-bam T20 leagues around the world- Rashid’s already part of the IPL, BBL, BPL- at its heart, the bowler’s rise is akin to a river that became the ocean one day.

Never looking back at what he didn’t have, such as a strong financial foundation of good friend (and teammate) Mujeeb Ur Rahman, Rashid Khan’s success is his ability to create magic with the ball in hand.

It’s an art he practiced in countless backyard games at an underwhelming largely rural household in one of Afghanistan’s thirty-four provinces.

It’s a craft many a batsman has failed to pick at the highest annals of the game.

In the current context, it may not be incorrect to say, Sunil Narine has long been replaced by a more menacing, cunning exponent of the white-ball.

A man whose wristy brilliance has already afforded him the status of the best leg spinner in the game right now.

Rashid was only 18 when he debuted, was only a year and a half into Cricket when he made worldwide headlines thanks to his 7 for 18 against the West Indies down at the Caribbean (1st ODI, St. Lucia), and at 22, is the fastest to 100 ODI wickets in the men’s game.

Depending on who you are, the definition of success may vary. If you consider financial security as the hot-shot definition, then surely Rashid’s earned that early on in his life. A star of international reckoning outside of cricket, even UNICEF depends on his reach to amplify their causes like Girl’s education and tackling malnutrition.

He is one of the main faces of the current advertising campaign for My11Circle.

But honestly speaking, from what one makes of Rashid Khan- the man who hates absolutely reviles the idea of being hit for runs- it doesn’t seem that leading a flamboyant life with a pronounced attention to money would define success for the youngster.

The ideal definition of success could much rather be the number of youngsters Rashid Khan compelled to pick the ball over the bat back in Afghanistan- no?

To his credit, the right-arm leggie doesn’t always rely on the element of flight.

At an age where many a cricketer often carries a hint of Shane Warne’s style, Rashid attacks with a difficult-to-process action wherein he rushes to the popping crease to deliver what could either be a googly, a straighter one, or even an off-break.

Where most spinners either depend on accuracy or speed, Khan combines the two to ramp up mean spells much to the chagrin of batsmen.

Moreover, he’s an excellent fielder of his own bowling and a reliable figure out in the deep.

On Friday, January 17, 2020, in a BBL contest featuring Adelaide Strikers and Brisbane Heat, Khan sent Chris Lynn packing after the right-hander mismanaged an agricultural slog to mid-wicket. But it wasn’t before the Afghan ran full tilt taking a catch that might’ve even put an Andre Russell or Ravindra Jadeja to join hands in admiration.

For someone who has already collected 245 wickets, you simply can’t imagine Afghanistan today in the absence of their limited-overs-captain.

Think of it as India entering a contest minus Kohli or Rohit.

In fact, Rashid Khan’s success is also determined by the sheer gap he enjoys to the next most-successful bowler for Afghanistan.

Mohd. Nabi, second-highest wicket-taker of all time, sits on 207 dismissals, thirty-eight behind Khan.

To sum it up, you bring Rashid into the attack and you open a Pandora’s Box for batsmen, leaving them unsettled, just like Stanikzai did three years back at St. Lucia bringing Rashid into bowl with West Indies already struggling at 68 for 2 off 22.

How many bowlers have succeeded at taking a wicket of their very first delivery against the West Indies, in West Indies?

A sharp leg-break that saw Jason Mohammed hold onto first slip was just one of the seven successes Khan enjoyed at the Daren Sammy National Stadium.

Entrapping Roston Chase for naught, the Barbadian caught plumb in front of his debut ODI for West Indies would rupture the middle-order, the very next ball.

A few moments later, with the hosts chasing 143 off 153 found Shai Hope on his way back, caught at first slip. But a bigger setback was to follow.

From 70 for 5, the hosts slid to 70 for 6 as Rashid bowled Jason Holder for a first-ball-duck.

Chances are, had a Lara or Sobers been in attendance, and lucky they weren’t, they’d hung their heads in disbelief.

But turning up miracles with the ball is a usual day in the office for the number 1 bowler on ICC World T20 rankings.

In his maiden T20 World Cup appearance, Khan teamed up with Gulbadin and Nabi to raise down the 2016 world cup winners.

His 2 for 26 was as instrumental in Afghanistan causing the greatest upset in their T20 history as was that memorable 3 for 11 against an unsuspecting Zimbabwe.

Rashid would finish with eleven wickets in his inaugural World T20 appearance.

Not a man who depends on a disguised action, Rashid Khan’s report card from a day spent on the field usually reads a collection of several dot deliveries.

Never before has the equation in modern T20 cricket been more simple and engaging as today.

A giant stride forward, a six, whether off a full toss or some other bad delivery eases up the pressure. But an accumulation of dot ball doesn’t.

To this day, his 18-ball-40 for the Adelaide Strikers is considered as among the best cameos in BBL history.

For a man who’s only 22 and already in a league of his own, it seems only more achievements will be the norm in the times to come. 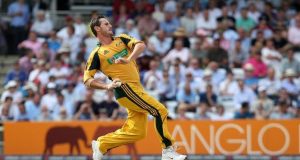 Dev Tyagi - April 29, 2017
0
What does a fast bowler need? Lanky frame? Menacing speed? Perhaps accuracy too, right? Frankly, Shaun Tait had it all, sometimes minus the accuracy. Often,...