The death of Dean Jones has hit me hard, and yet I’m a middle-aged man who has experienced loss and fully appreciates that everyone’s time will come one day.

And yet here I sit, reminiscing about my youth, and how it is tied to arguably Australia’s founder of the attacking style of play at One-Day international level that inspired the likes of Adam Gilchrist and Ricky Ponting.

As I’ve hit my 40’s, I’ve started the phase in life where the athletes I grew up with have retired and been replaced by the next crop of young talent. My heroes are now becoming the old-timers we see in the commentary box, in much the same way the likes of Richie Benaud, Bill Lawry, and Tony Greig appeared on my TV screen when I was a teen.

Growing up in Australia

Growing up in Australia in the ’80s and 90’s you watched cricket in summer and football in winter. And once a year everyone got together to watch the Australian Formula 1 Grand Prix in Adelaide. That’s just how it was.

When I was a kid, all I wanted to do was play cricket for Australia.

And I only wanted to be a fast bowler who batted 11.

It seems as odd now as it did then, that given the bevy of bowlers at Border and Taylor’s disposal that a batter would be my idol, yet here we are. Who can argue with a passionate child?

My idol was Dean Jones.

Once I even got into a heated argument with my grandpa, arguing black and blue that Dean Jones was a better cricketer than Sir Donald Bradman.

My grandpa, who lived in Adelaide his whole life, was lucky enough to see The Don grace the hallowed Adelaide Oval on more than one occasion. For some reason, he didn’t appreciate my argument or come around to my way of thinking.

Often my grandpa would come and watch me play school cricket, and much to his chagrin I would throw my wicket away cheaply.

‘Why are you always trying to hit the cover off the ball?’ he would ask.

‘Bradman never got out trying to hit sixes, he would always play the ball along the ground. Why don’t you keep it on the ground?’

Bradman not hitting sixes only served to further prove my point – Dean Jones hit more sixes, therefore, he was better.

Besides, I wasn’t there to bat, I was there to send stumps flying with the ball, as the very white and very short love-child of Curtly Ambrose and Malcolm Marshall.

The Pioneer Of One-Day Cricket

After the cricketing revolution that saw players playing in their pajamas’ with a white ball, the 50-over game in the early days was often just a shorter version of a test match.

The same players played both forms of the game and would set out their stall by digging in to see off the new ball, then hope to come home with a wet sail with wickets in hand, and post a score around 250-260.

Dean Jones changed all that.

Coming in at first drop, the fiery Victorian went on the attack from the first ball, showing all the swagger that made him a hero across the country.

Jones’s fast reactions, ability to read a game, and be on the attack whether with the willow, running between wickets, or patrolling the outfield made him the first true one-day international specialist.

While this approach may have been to the detriment of his test career, his style inspired the next generation of Australian batsmen.

Often meeting your heroes can be a disappointing experience.

You spend years watching them from afar, and you feel like you know them, like they’re a friend of yours. Then depending on the mood they’re in when you meet them (or their personality) you could be brushed off or ignored, and the illusion you had comes crashing down.

I’m happy to say that I was lucky enough to meet Dean Jones twice, and both times he was the same as the person I’d seen on TV.

The first time I met Jones was an encounter I won’t forget.

At the time, I was a member at Adelaide Oval, and before the renovations, back when the seats were impossibly uncomfortable, the players sat at the back of the members’ area and interacted with the public.

I was 18 yet very anxious, Jones had ended his Australian career and was playing for the Victoria Bushrangers, yet he was still wielding the willow with the same enthusiasm he had while representing his country.

Victoria were playing South Australia in a Sheffield Shield game at Adelaide Oval, and I turned up every day in my Bushrangers shirt and sat in front of the team area, hoping to pluck up the courage to ask Dean Jones to sign my shirt.

By the third day, things weren’t looking good for me, I hadn’t moved from my seat…

On the morning of the fourth day, I decided it was now or never. I faced my fear, stood up with my silver pen, and asked Jones if he would sign my shirt.

He smiled, signed it, and passed it around to the rest of the Bushrangers squad to sign it too!

It was as if he sensed my anxiety, and tried to put me at ease.

We had a chat, and he even gave me a tip – spray the shirt with hairspray and it will protect the signatures.

I did, and I’m happy to report that they’re still in the same condition now as they were some 20-plus years ago.

Time Stops For Nobody

As we age and our heroes age and inevitably die, it gives us pause for thought and reminds us of our own mortality.

Dean Jones was only 59 when he died, he should have had a lot of years left, and he will be sadly missed. His popularity in India is still as high now as it was when he made that staggering 210 in the Tied Test under the searing sun of Chennai in 1986 – the very match that gave the young Australian side the belief they could match it with the best and sparked a period of dominance for the men in the Baggy Green.

The world has lost one of the great cricketers.

Personally, I’ve lost the second big hero of my youth. The first was Ayrton Senna in 1995, today it is Jones. 25 years separate the two events, but the empty feeling inside is much the same. 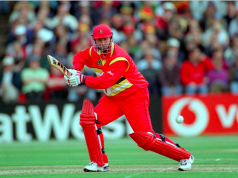 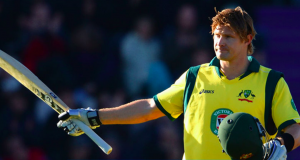