Life, as we know it has only one certainty- death- with the irony being its timing, the biggest uncertainty of them all.

And when it happens to a person all of 29, it’s a shocker.

Young Afghanistan top-order batter Najeeb Tarakai who had just started to blossom in cricket and in life unfortunately passed away yesterday succumbing to injuries he had sustained from a road accident on October 2.

His condition was rather critical and was to be taken to Kabul or abroad for better medical care after undergoing surgery in the Afghan province of Nangarhar.

The untimely demise is a jolt not only for the Afghanistan Cricket Board but for Cricket across the world.

With a heavy heart, the Afghanistan Cricket Board in a statement on Twitter said ‘ACB and Afghanistan Cricket Loving Nation mourns the heartbreaking & grievous loss of its aggressive opening batsman & a very fine human being Najeeb Tarakai (29) who lost his life to tragic traffic accident leaving us all shocked! May Allah Shower His Mercy on him.’

His fellow countrymen, all-rounder Mohammed Nabi also deeply saddened by this tragedy, mourned in a tweet ‘It’s very sad to learn Our Friend and Very Fine Cricketer Najeeb Tarakai lost his life to the injuries he was suffering from the recent accident. His loss kept us all stunned and speechless. My deepest condolences to his family and all friends. May his Soul Rest in Peace.’

Najeeb Tarakai was as aggressive as they come in the opening role with an impressive 8 centuries in first-class cricket at an average of over 40 and a strike rate high-up in the 90s.

A national call-up was always on the cards and the moment finally arrived when young Najeeb made his debut against Bangladesh in the 2014 T20 World Cup albeit unfortunately only scoring 7 in a losing cause.

He played 12 T20s and the solitary ODI in his 6-year international career owing to constant toss ups with his fellow compatriots, the aggressive keeper bat Mohammad Shahzad and young southpaw Hazratullah Zazai for the two opening berths.

Having scored 258 runs in the T20 format, his best of 90 in only 58 balls came against Ireland in 2017 at Greater Noida, the Indian city which serves as the home ground for the Afghanistan team.

Afghanistan scored a massive 184 on that occasion with Ireland managing only a paltry 93 in reply. Wily leg spinner Rashid Khan had claimed a fifer whilst conceding just 3 runs.

What’s more, the duo of Najib Tarakai and Rashid Khan was declared joint players of the match.

His ODI debut which regrettably was the only limited-overs contest he played, also came in the same series against Ireland, with the Afghans again claiming the cherry, comfortably chasing down 229 though Tarakai only scored 5.

Truth be told his T20 career was pretty impressive for the limited opportunities he got, and with Shahzad being at the tail end of his career, who knows Najeeb could have made the opening spot his own, had God not written the script differently.

One can’t imagine what his family would be going through right now and we have them in our thoughts.

A loss for Afghanistan, a loss for cricket, and? A loss for the young Afghans who, thrilled at Najeeb Tarakai’s growing career, would have wanted to follow in his footsteps.

May God bless his soul.

What Moments Stood Out As The White Ferns Encountered The Mighty Australians Recently? 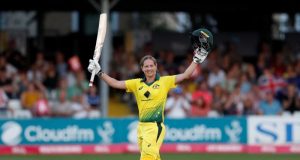 Chandhana Gogineni - July 27, 2019
0
The pivotal knock of unbeaten 133 from Meg Lanning in the First T20I in the Ashes series was a mix of classic batting display as...