I am not much of a Spiderman fan, but there is a dialogue from this superhero movie that resonates with me in every facet of life.

One question, does BCCI understand this line or sentiment?

They certainly know what power means with their financial clout in world cricket owing to large sums of revenue earned through Indian television viewership across the globe and spectator turnouts in stadiums globally with the large Indian diaspora in every corner of the world, but do they have any idea about the responsibility that comes with it?

Let me add some meat to the bone to divulge what am I talking about.

Recently, Allan Border one of Australia’s finest captains and a towering legend in world cricket lambasted BCCI on trying to alter the schedule of the marquee India’s tour of Australia planned for later this year as a part of the Australian summer.

It’s a known fact for Southern hemisphere countries, the likes of Australia and South Africa having two timeless traditions when it comes to Test cricket, the Boxing Day Test, which starts on 26th December every year, and the New Year test which starts on 2nd or 3rd January every year.

It’s a festive occasion in these parts of the world, much like Diwali is in India.

Changing these dates for the start of a test match is non-negotiable for the boards, the ICC, and moreover the fans whose excitement during this period soars even more than the height of Mount Everest.

Well, BCCI have done exactly that.

They have requested Cricket Australia to move the New Year Test match in Sydney from 3rd January 2021 to 7th January 2021.

The reason? Indian players need more time off between games.

Anyone who understands what timeless tradition is would get irked by this and that’s exactly what the original AB has expressed in his statement to Fox Sports News.

‘I don’t think it should be a negotiated scenario.

If it’s necessary because of what is happening globally with the virus then fair enough, but if it’s just because they want a bit of a spell-off between Boxing Day and the New Year’s Test match then that’s rubbish.

We’ve been doing this for how many years now, back-to-back Test matches? It works a treat through that Christmas-New Year period and I wouldn’t be comfortable with it moving just because India want a couple more days off.’

‘I think they’re just playing mind games. They consider themselves the strength of world cricket, and financially that is the case so they do have a fair say in things. But if the roles were reversed, we wouldn’t have much say in the itinerary, it would just be put in front of us and these are the dates that we’re going to play. You can negotiate as much as you like but these are traditional dates that everyone knows have been on the calendar forever, so to start negotiating now… it’s a tough one. I wouldn’t be bowing down to it – we’ve got traditional dates, let’s stick with them.’

Furthermore, he also criticized the shifting of the traditional Brisbane Test to the back-end.

‘It’s such a great ground, it’s a pitch that we know well and play well on and it gives us a huge start to our international summer. Now obviously, India don’t want to play that first game in Brisbane, but that shouldn’t be the case. We should just be saying ‘these are the venues and these are the dates’. As far as of when games should and shouldn’t be played, I don’t think we should give an inch at all.’

What’s more, Seven West Media, the Australian broadcaster for the series took CA to arbitration demanding a cut in annual fees, reportedly dissatisfied with the planned schedule of the India tour.

The only consolation at this point is the final schedule still needs to be ratified by CA and BCCI which includes three ODIs followed by three T20 internationals in Adelaide between December 4-8 and then the four-match Test series with the opener in Adelaide from December 17 instead of the traditional Brisbane.

So what rises from the aforementioned is a simple question.

Are both cricket boards having an equal say in deciding an itinerary that, at the end of the day, involves Australia, due to the play hosts?

For if not, then is all that’s going on at present- with all due respect to the powers that be- just? 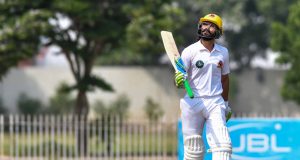 Fawad Alam Returns To The Green. Let’s Hope The Grass Is...

Abhishek Srivastava - December 10, 2019
1
10 Years and 13 Days that would be the wait which Fawad Alam would have gone through to play his next match after that...