The world’s foremost franchise-based T20 League in men’s game is midway through and we have witnessed 45 IPL games so far. The condition here in Sharjah, Dubai, and Abu Dhabi is getting slower day by day but it still leaning toward the batsmen.

One feels the existing order has undergone a bit of a shakedown. How so? No longer are Delhi and Bangalore underperforming; no longer are Chennai the ‘unbeatable’ side.

Mumbai, though, seem strong as ever. You can take Punjab lightly at your own peril.

While several South Africans like the talismanic AB de Villiers, Quinton de Kock, Chris Morris, Kagiso Rabada, and Anrich Nortje -have come exceptionally good, as have the likes of Nicholas Pooran of the West Indies, the IPL 2020 has seen a lot about up and coming talents from India.

So which promising names are taking the IPL 2020 by a storm?

The 20 years old southpaw made his IPL debut against Sunrisers in Royal Challengers Bangalore’s first match this season. The left-hander is just 9 matches old in this league and he has already scored 296 runs on an average of 34.

Padikkal was drafted into the Karnataka state team back in 2018 but he flourished as a batsman in the 2019-20 season where he played his side in winning the Syed Mushtaq Ali Trophy and Vijay Hazare trophy. In the auction of 2019 IPL, RCB bought him and now he is mounting up in the likes of Virat Kohli, AB de Villiers, and Aaron Finch.

So far, he has hit 3 half-centuries in the IPL 2020, but young Devdutt showcased truly came into his own in the match against the Mumbai Indians. In that innings, he hit five boundaries and two maximums and played both spinners and the quicker bowlers with ease. He smoked a SIX off James Pattinson from his back foot over the long-on region.

Some cricketing pundits even compared him to Yuvraj Singh. The legend himself, Yuvraj Singh got impressed by this young talent and tweeted. Yuvraj quoted – “Paddikal looks really good need to bat together and see who hits longer”.

Apart from all the class in his batting, Padikkal is a gun fielder and his athleticism on the boundary fences is impeccable.

The young Indian gun who played the under 19 World Cup in 2020. He represented India six times in that tournament and bagged 11 wickets. He started representing the Uttar Pradesh state team at the mere age of 16 years. The tall lanky right-arm bowler is just 19 years old and he bowls at some deadly pace.

Rajasthan Royals bought him during the U19 WC and now he is doing some wonders for his side. He made his debut against MI at Abu Dhabi where he got his first flash in the form of Quinton de Kock.

Kartik’s default length is back of the length. He consistently bowled at high 140’s and his shorter deliveries hurry up towards the batsman but he is much more than this.

In the match against Chennai, Kartik outsmarted Shane Watson. Initially, he tested Watson with the bouncer but got hammered for a boundary. The very next ball he corrected his length but the ball got the edge and went past the fine boundary.

Captain Smith was getting animated but Kartik was smiling as he knew all his plans. On the last ball of the over, he bowled a good length ball at the off-stump line angling into the stumps. Watson tries to flick it for another boundary but the ball hurries up to him, gets the inside edge, and an easy catch to short mid-on.

So far, he only has been able to bag 5 wickets in the 5 matches in the IPL and but it is certain his best has still to come.

Varun might not be called a youngster as he is a 29 years old grown man but he comes from David Hussey’s School of latecomers. He made his Ranji Trophy for Tamil Nadu debut in the 2018-19 season.

In the age-group cricket, Varun was a wicketkeeper-batsman who dropped the idea of becoming a cricket and went to become an Architect. The job of Architect also bored Varun and that when he turned his wrist and again tried his luck in cricket.

In 2019, KXIP bought him for whopping prize money of INR 8.4 Crore. He played just a single game for Punjab before he got injured and ruled him out of the season. As a saying suggests, “Luck favors the brave”, Chakraborty became a crorepati yet again. This time KKR bought him for INR 4 Crore and he is doing wonders for his side.

KKR team management has so much faith in him as he is playing ahead of the chinaman Kuldeep Yadav. Chakraborty has scoped 7 wickets at an economy of 7.31. Varun Chakraborty is a mystery spinner who can bowl seven different kinds of deliveries.

Ravi Bishnoi who was born and brought to Jodhpur. Back in the teenage due to lack of infrastructure and passion for the game, he along with his some friends set up a Cricket Academy for themselves.

Bishnoi represented the Indian Under-19 team in the World Cup 2019 where he finished as the leading wicket-taker of the tournament. He grabbed 17 wickets in just 6 matches in that World Cup. The auctions of the IPL 2020 came up during the U19 World Cup and Kings XI Punjab bought him for stirring prize money of INR 2 Crore.

The young leggie has scalped 8 wickets at a very economical rate of 7.5 in a tournament which has been disastrous to his franchise. His best figures of 3 for 32 came against RCB where he sent 3 batters back to the pavilion using his flippers, topspins, and googlies.

Ravi Bishnoi has an action like Shane Warne and he bowls quicker like Anil Kumble. As Kumble is the head coach of KXIP, Bishnoi will surely learn a trick or two from the master himself.

The above told, one hopes, it’s a matter of time before the youngbloods forge their own destiny in Indian cricket. While this may not be the easiest thing to do given the sheer mass of talent in India, there’s little reason to doubt that this would happen given the sheer talent they possess. 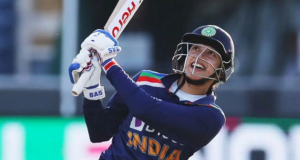 Charudatt Prabhu - July 18, 2021
3
In Sangli, the river Krishna flows like strokes of her bat — rippling, gently and elegantly; the iconic Irwin Bridge mirrors her stable stance;...