Women’s Big Bash League (WBBL) has returned with its sixth season. While the eight games were scheduled, only 3 games could take place in the 1st week and for the rest, rain played the spoilsports in Sydney.

Grace Harris – the name is similar to destructive innings. And, she certainly didn’t disappoint her fans while playing for Brisbane Heat in the opening game of WBBL 06 against Perth Scorchers.
After all, who can forget her 42-ball century in 2018? Notably, this is still the fastest century in WBBL history and the second quickest in women’s T20 as well.

The 27-year-old came in at No.4 as defending champions Brisbane Heat chased down 133 to beat Perth Scorchers in the game on day one.

However, it was certainly not a free-flowing game in the beginning. She took her time, scoring 11 from her first 18 deliveries before changing her pace. But she ended it in a great manner. She smashed 42 from the next 19 balls and helped her side win.

Her approach resembles with former Indian captain MS Dhoni and she didn’t deny it. While acknowledging the fact of taking inspiration from Dhoni, she revealed that she is happy being the finisher.

“I’ve found its really just working for me, the game plan I’ve got,” Harris said to cricket.com.au.

“I can catch up, it doesn’t matter how many dot balls I have – it’s not ideal and you want to rotate the strike as much as possible – but in situations like today where I struggle early, it’s (about) remaining in a calm mindset,” she added.

“I’ve been watching a lot of MS Dhoni’s innings really, I took a bit of inspiration from him. He’s a fantastic finisher of the game and he might get behind but at the end of the day, they win games and he’s ahead of the count. I’m definitely hoping to do something similar to that,” she again shared.

It seems star-studded Melbourne Stars’ luck isn’t working for them. With 2 no-results from their opening two games, the only positive was their ‘never give up’ attitude.

While the captain Meg Lanning showed that how consistent she is with a stunning 51* off 50 in the 1st game, Mignon du Preez (32) and Annabel Sutherland (31) can give serious trouble to the opponents.

However, it all happened before the rain stopped the play.
And against Sydney Thunder on the next day, they started in a fantastic way which eventually being curtailed. Thunder were reduced to 13 for 2 inside the 3 overs, with Rachael Trenamam and Tammy Beaumont being sent back in the consecutive overs before the rain started and the game ended with no result.

Ellyse Perry is considered one of the best all-rounders in world cricket. And it is no wonder that her return to action after seven months would be memorable for everyone.

Moreover, it was a WBBL match and it had to be memorable.
But, the weather had some other plans.

Ellyse Perry’s resumption would certainly be huge news if she could get the chance to play on the first day. All thanks to some inclement weather as the game didn’t take place on day 1.

Perry’s hamstring injury forced her out of the ICC T20 World Cup in March and surgery and post-rehab led her sitting outside returning during Australia’s series against the White Ferns last month.

However, the wait for the world’s best all-rounder was totally worthy. She starred with both the ball and bat on day 2 and helped Sydney Sixers reach the finish line against Adelaide Strikers in a rain-affected game.

Strikers didn’t get the service of Suzie Bates and Stafanie Taylor and at one point, they were reduced to 13 for 3. While Bridget Patterson’s quickfire knock helped them reach 68 for 7, it was Alyssa Healy who helped Sixers got off to a flying start.

In a rain-affected match in the WBBL 06, the target became revised as well.

But, the rain had some other plans.

With seven balls still needed to constitute a match, rain once again hit and the target reduced to 46 in six overs.

With Alyssa Healy’s dismissal, Perry ensured the victory by hitting the winning run, remaining unbeaten at 14 from 16 balls with two deliveries to spare.

Rain – the spoilsports and the winner:

Among 8 games, only 3 could be played and the rain was the winner in the remaining 5. While the two games on day 1 were being washed out, the next day showed a bit more.

Three games were abandoned on day 2.

Sydney has witnessed pretty bad weather that truly affected the WBBL right at the start. Not what one would’ve desired.

It is regrettable, and not just that, but a matter of concern that Sydney Thunder, Melbourne Stars, and Melbourne Renegades have each been involved in no fewer than 2 games with no- results.

Surely, the way it’s panning out, the WBBL 6 may well see the points table playing its own part.

All of that said, this was just the start. Imagine what might happen in the days that follow? 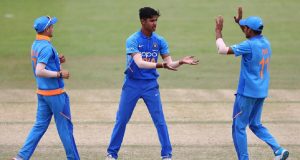 Who Are Among The Best Indian Players At The Under-19 World...

Chandhana Gogineni - December 24, 2019
0
With heaps of glory, acclamation at stake- India’s youngest team will again set out to battle against the world’s best teams in the tournament...