Age is just a number.

Some just say this for the heck of it, but those who live up to this age-old adage end up inspiring others.

Think Milkha Singh. It probably sounds truest in his case when they say a 70-year-old doesn’t miss exercise everyday; what’s your excuse for not working out today? But if you turn to cricket, it serves inspiring examples almost all the time.

For instance, every year the IPL brings some fresh talent to the table but there are big guns like the Universe Boss Chris Gayle, Australian all-rounder and recently retired Shane Watson,  ex-skipper and cricket legend MS Dhoni who have been playing since the start of the IPL. But in-between these immensely talented players who started their career as youngsters there was Pravin Tambe, who made his IPL debut aged 41.

This usually is that period in the life of an athlete where an overwhelming lot has either become a ‘former cricketer’ and if not, then made debut in AC commentary boxes instead of sweating out on the field.

But then Pravin Tambe’s laws of life- had there been a book by this name, he would certainly have made it a fine author-operated differently.

He ran, ran hard around the field, bowled with the infectious energy of a 20-something youngling whose best days lay ahead of him.

Bowling 660 deliveries in thirty-three IPL innings, he persevered himself into getting 28 wickets.

For most he was a leg-break bowler. To his Rajasthan Royals, with whom he began and played for the better part of his career, he was a diamond that shone brightest in cricket’s most challenging format.

Cricket is a numbers game where half-a-dozens, boundaries, half-centuries, and hundreds overshadow wickets taken by the bowlers.

The bowler’s shelf-life, already a critical factor that can jar or make one’s destiny plays an all-too-big a role.

Moreover, T20 cricket is not the format that favours the wielders of the white ball all that much.

Yet, there are some who are a product of sheer perseverance. Some challengers control their fingers magnificently and turn the tables in the crunch situation as a bowler.

Pravin Tambe, started in 2013 season, aged 33, and immediately created a buzz for his tight line and disciplined spells.

Noteworthily, Pravin made his domestic cricket debut after playing the IPL 2013 season. Later, his magical fingers thrashed the batsmen in Champions League T20. Tambe was the highest wicket-taker in the league and got the ‘Golden Wicket award’ for taking the 12 wickets at a remarkable average of 6.50 in the league.

In the IPL 2014 edition, Tambe gave a heart-attack to the KKR batting order by picking up a first hat-trick of the season.

It was the 25th match of the season and the stage was all set. KKR were at 122-3 in 15 overs while chasing a good total of 171 and then Tambe came to bowl the Sixteenth over.

He started the over with an intelligent wide ball that earned him the scalp of a talented right-handed batsman Manish Pandey who got stumped out by wicket-keeper batsman Sanju Samson.

On the secnd ball of the over, Yusuf Pathan came to bat and without troubling the scoreboard, got caught out by Tambe on his bowling.

Hat-trick ball, RN ten Doeschate just couldn’t believe what happened as he was given LBW out by the umpire on the very first ball he faced and Pravin Tambe spun the match in the favor of the Rajasthan Royals. He was awarded Man-of-the-match for his bowling heroics in the game.

In doing all of this, he also represented the now disenfranchised Gujarat Lions in the 2016 edition of the famous IPL.

Pravin Tambe was the oldest player sold in the IPL 2020 auction last year. Kolkata Knight Riders picked up the leggie for Rs 20 Lakh. However, he was banned from playing the IPL by the BCCI for featuring in an overseas cricket league.

In August 2020, Pravin was picked by Caribbean Premier League (CPL) franchise Trinbago Knight Riders. “Since then I have trained indoors. For any player, this is a big opportunity and I hope to play to my strength,” Tambe said, before joining the TKR.

Tambe’s CPL team TKR won all 12 matches in the tournament which led them to 4th title.

If hard work and dedication ever had a face, somehow it would have looked like Pravin Tambe. He is and shall remain an inspiration for all the generation players.

The man who bowled lengthy spells, determined to make noises in the batsman’s game with the white-ball in hand.

But, many questions need to be answered after witnessing several remarkable performances by the magical spinner Pravin Tambe.

Does age matter more than excellence?

Should Pravin Tambe have been given an opportunity a little earlier?

Frankly, we can only admire or admonish cricketers for we are fans; we may hold a love-hate relation with many, but ultimately we can only emote on the game, not participate on the field.

But as an author of this piece, I can only reckon that if you dig deep into Pravin Tambe’s career- you would be compelled to believe he may just have been handled differently, would loved to have received a lot more co-operation, maybe had there been mercurial or sheer talent.

Yet, thank heavens, there was a man nicknamed The Wall for Pravin Tambe in those incredible Rajasthan Royals days.

But are there many for late bloomers nowadays? 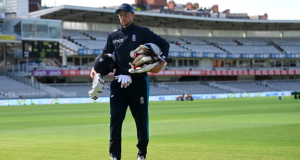 Joe Root’s Masterclass At Lord’s Just The Kind Of Inning That...

Abhishek Srivastava - June 6, 2022
0
During the four days of the engrossing Lord’s Test, both teams proved why Test Cricket is the pinnacle...