It hasn’t been a great year for Team India in ODI cricket. Yes, there has been very little game time but India did play nine 50-over games. Out of those, they ended up winning a mere three games. They lost two out of the three ODI series’ as well.

Both of those series losses came consecutively. This is by far has been Team India’s worst year in ODI cricket for a long long time now. In fact, this is the first time ever that Virat Kohli has lost two successive ODI rubbers in his captaincy tenure thus far. In the 2015-2019 cycle between the two World Cups, India were absolutely dominant. They had a win-loss ratio of 2.074 which was second only to England.

One of the major reasons for India’s slide this year in ODI cricket as been their bowling. Jasprit Bumrah has looked off-colour and his wicket-taking ability seems to have gone missing ever since he returned from injury. Bhuvneshwar Kumar’s injury woes haven’t helped while Mohammed Shami has been the standout. The other fast bowlers have been disappointing while the spinners have leaked a lot of runs.

However, let’s not dig deep into this. In a year where a lot of things have gone downhill, it is India’s middle-order that has stood out and shown a lot of promise.

India’s batting from positions 4 to 7 have been a topic of debate forever now. Moreover, India’s over-dependence on the top three is no secret. A lot of teams have used the tactic of going hard at India upfront and if they could pick early wickets, they were almost certain to win the game.

India’s top three used to score heavily before. In the last five years, they have been the ones doing the bulk of the scoring and helping India win matches. Take a look at the following chart. India’s top three contributed more than 60% of the runs in 2016, 2017 and 2018. In 2019, it dropped to 57% but that’s still a significant number.

And look at the contrasting contribution from the middle-order (batsmen batting in positions 4 to 7). 2019 sees a spike with MS Dhoni doing a large share of the scoring while 2017 had Yuvraj Singh producing a couple of special performances. Apart from that, the returns were worrying.

The likes of Shreyas Iyer, KL Rahul, Hardik Pandya and Ravindra Jadeja have shown that there is some light at the end of the tunnel. It was remarkable how India just couldn’t find players to bat in the middle-order and perform consistently for a prolonged period of time.

There was constant chopping and changing. India’s No. 4 had become one of the big debates around world cricket. Even in the 2019 World Cup, they didn’t have a stable middle-order with only MS Dhoni and Hardik Pandya being the constants.

This year, a lot of it was different. India’s top three didn’t really set the stage on fire. Iyer, Rahul and Jadeja played all the nine ODIs in 2020. Yes, Rahul opened in one game and batted at #3 in another. But he largely batted at #5. Iyer was constant at #4 while Jadeja has been slotting in at #7.

These three are in the top six run-getters for India in ODI cricket this year. In fact, in 2020, for the first time since the start of 2010, India’s leading run-getter is not either Virat Kohli or Rohit Sharma. It is KL Rahul who has topped the ODI batting charts for India in 2020.

The two away ODI tours in 2020 for India have shown that this middle-order is worth persisting with and giving them a longer rope. India’s top three has scored all of one hundred combined in 2020 and that was Rohit Sharma in the third ODI against Australia in January this year. India have lost a lot of wickets in the powerplay and have been put under pressure pretty early. But the middle-order has stood up. And India’s totals this year in ODI cricket are a testament to that.

If it was the duo of Shreyas Iyer and KL Rahul that took stole the limelight in New Zealand earlier this year, it is Hardik Pandya and Ravindra Jadeja that rocked in Australia and impressed heavily.

While they got the runs and scored consistently, it is how they got the runs and the temperament they showed that is vital here. Shreyas Iyer seems to have made the No. 4 spot his own. Yes, he didn’t convert his starts in this three-match ODI series against Australia and was found out against the short-pitched stuff. But he has shown that he is not someone who can be discarded after a couple of failures.

KL Rahul has been around for a while and has been tried in the middle-order earlier as well but that time, he didn’t get a long rope. This year, he was static at No. 5 and he delivered. He’s played some fabulous knocks and he can go through the gears really well.

The sample size for Hardik Pandya is small. He played in the ODIs only in Australia. However, he performed outstandingly well. He got two 90s and mind you, he played as a pure batsman. The Baroda all-rounder still has some way to go before he starts bowling full tilt. But Pandya stamped his authority and showcased great maturity and grit. His game-sense seems to have improved a lot and Pandya showed that he is just not a basher in Team India’s middle-order.

Ravindra Jadeja has been around for a while now. For a couple of years, he wasn’t a part of the white-ball teams but he has made a stellar return. Moreover, Jadeja’s batting has come a long way. His power-hitting has got better and he is evolving every day. He almost won a game in New Zealand when everything seemed lost. He played a couple of really good knocks in Australia.

Another plus point about all these players is that they are excellent players of spin. They can bash them out of the park at will too. Rotating strike isn’t an issue either. Yes, each of them has an issue here and there. But Team India’s middle-order has shown the spark.

Moreover, what it also does is with Pandya and Jadeja at 6 and 7 respectively is that it resolves India’s sixth bowling conundrum. Of course, that is when Pandya is back to full fitness and starts bowling regularly. But that will allow India to have a few options up their sleeve and it will allow Kohli to use his other bowlers accordingly.

Thus, it may have been one of the worst years in a long long time for Team India in ODIs. But one big positive has been their never-ending middle-order muddle took decent strides in shaping up well for the future.

Make no mistake, the middle-order crisis is by no means resolved. But there is some light at the end of the tunnel. 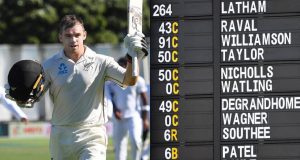 Abhishek Srivastava - December 20, 2018
1
Tom Latham was born just 12 days after New Zealand’s biggest heartbreak in Cricket. Nobody would have known it better other than his father Rod...