As a die-hard Protea supporter, I would like to extend a big thank you to the Sri Lankan cricket board for giving the green light to their team to travel to South Africa for the two-Test series starting on Boxing Day after their medical team was satisfied with the bio-secure bubble arrangements.

Even the almighty would agree how important it is for Cricket South Africa to successfully host a full tour after the mid series English debacle amid these uncertain COVID times.

The Sri Lankan tour would not only help generate broadcasting revenue albeit not as much as inbound tours from the “Big Three,” i.e., India, England and Australia.

Although in the time of the pandemic and with the CSA incurring a loss of 654 million rand in their four-year cycle, any injection of funds are more than welcome.

What’s more it would also help create employment for all the people involved in hosting the series, right from hotel staff where the Sri Lankan and South African teams will stay, to the people responsible for the travel arrangements and also the stadium management including the ground staff.

This post a period of uncertainty amid England deciding to cut their Mzansi tour short with the ODI leg postponed to a later date in the ICC calendar after there were 2 suspected positive COVID cases in the English camp, possibly due to a lack of confidence in the bio bubble arrangements created by Cricket South Africa, though this was not made official.

It could also have been owing to a mental fatigue for the English players, playing in bio-secure bubbles which started way back in July from the onset of the West Indies inbound tour that they decided to leave early.

Anyway, what’s in the past with the English tour should remain there and the focus should now shift to welcome Sri Lanka.

Well, having put the off-field drama to rest, the Proteas would be more than keen to beat the Lankan Lions considering how they were whitewashed the last time the Island nation set foot on their shores in the early part of 2019 for a 2 Test Series.

The two Kusals from Sri Lanka, Kusal Perera and Kusal Mendis had decimated the Proteas with their stupendous batting efforts in the coastal towns of Port Elizabeth and Durban which are traditionally spinning tracks and turned out to be more than conducive for the Lankans at the time.

Having learnt from the hosting blunder then, better sense has prevailed for Cricket South Africa this time around to stage the 2 tests on the bouncier Highveld pitches, at Centurion and Johannesburg that should see the Proteas enjoying a more familiar terrain.

Moreover, the Proteas would also be itching to resurrect their sinking test match form since the onset of their Test Championship pursuits with losing 6 matches and winning just 1 at the hands of the mighty India and England.

So, with the conditions tipped to favour the Proteas, let’s dive into their possible line-up under a new leader:

The rock at the top should retain his place with the grit and determination he shows to see through the opening bowling attacks of the opposition. Moreover, with the uncertainty of du Plessis in the test team post surrendering captaincy, Elgar is the most experienced batter in the line-up.

The Capetonian batter for me has done enough to be given another opportunity after his three-Test exploits against the English last summer with also getting a fifty under his belt. His measured approach at the top would do well to give the Proteas a solid start.

This guy is my number 3 to be stuck with for a long period of time. His solid defence matched with the ability to attack as we have seen in the shorter format should serve him well to build an innings and accelerate as the situation demands. What’s more, with young Zubayr Hamza’s inconsistent run, Temba seems more likely to make this position his own.

My captain and my number 4, as the best batter in the team. When this chap is in form, he is capable of dominating any attack in world cricket, and with 3 consecutive centuries in the ongoing domestic 4-day competition, form is certainly on his side. To add to his batting abilities, he is a natural at captaincy and in my humble opinion should be made the next test skipper.

With already amassing three fifties in the Four-Test series against the Poms last summer, Rassie has established himself as a reliable middle order bat even in the longer format of the game. So, absolutely no reason why the Proteas shouldn’t stick with him in time to come.

The limited overs captain for the Proteas with his swashbuckling Gilchrist like approach is my perfect four down bat who would more often than not give the much-needed impetus and momentum to the innings as we have already seen in the past.

The Proteas could decide either to go with a seam bowling all-rounder in Dwaine Pretorius who was used against the Poms in the test series to good effect or George Linde, the spin bowling all-rounder who had a good debut against India scoring 67 runs and taking 4 wickets in his only test appearance this far. This would obviously depend on the surface for either to do a job.

The left arm spinner from Durban has been a certainty in the Proteas side ever since his debut against Australia at the WACA in 2016. Having already amassed 110 scalps in just 30 tests, he by far is the numero uno spinner for the Proteas in the 5-day scheme of things.

Arguably one of the best speedsters in world cricket in any format, the fiery right-arm pacer picks himself in the line-up. His aggression matched with the penchant to deliver toe crushers should be reason enough to give sleepless nights to all the Lankan batters.

What a find this young man has been for the Proteas after the retirement of stalwarts like Steyn, Philander and Morkel. Having already taken 19 wickets in 6 tests, this Warriors man is en route to cementing his permanent place in the test side. Also, with his resilient lower order batting, he truly is a boon for the Mzansi.

The towering bowler from Durban definitely merits a place in the starting XI with his lethal bounce extracting ability. Having already taken 15 wickets from 5 games, he would definitely keep the Lankan batters on their toes, just consistency at times has all but deserted this paceman.

A name that have consciously excluded from this starting XI is Fancois du Plessis, with the need of the hour being to build a test team for the future.

With Faf already 36, after having surrendered captaincy and in the twilight of his playing career, in my opinion his contribution would be more fruitful in the shorter formats.

Though, it has to be said this XI surely looks formidable on paper.

What’s left is to make performances on the field as formidable and the series could well be the Proteas’. 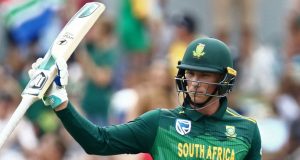