It was a warm sunny December day of the year 2012 in the western coast of Australia. Out came the country’s best ever batting wonder child since ‘The Don’ for his last hurrah. A brisk walk to middle, three to four butt-kicks with each leg, handful of shadow straight drives and a couple of flick off the wrists – effusing as much energy as they did 17 years earlier when he made his debut at the very same ground of WACA, Perth.

To no one’s surprise he was met with an obvious guard of honour followed by a venerating shake of hands by Proteas skipper Graeme Smith. What transpired next was an emotional 40 minute stay at the crease for the man who was akin to spending hours on it. A fairytale farewell denied. But there was that tiny consolation in the fact that he knew he had made the right decision to retire. As with all entities of nature, the end came as a relief. A reprieve from the palliative care he forced himself to be in for the final few years.

As Ricky Ponting walked off the WACA Ground with the whole audience on their feet, he stopped for a while, bestowed a final look at Test cricket and raised his bat for one last time which was indeed a poignant curtain call. The giant scoreboard said it all. Two words and they were all that required – “Thanks Ricky”.

Ponting clung to the values fostered in his working class origins from the wrong side of Tasmania’s second city, Launceston. A cricket overwrought, he would sneak into the dressing rooms of Mowbray Cricket Club and go through weighing their bats while the lads were busy playing the game.

Thanks to his genetics giving him the stick by depriving him of a big stature, Ricky had no choice but to face bowlers older, stronger and bigger than him. This all but forced him to tip his switch to fight or flight mode – one of Mother Nature’s very basic and instinctive physiological responses to a threatening situation which readies one either to resist forcibly or run away. Rightly so it taught Punter to cope against adversities from a very tender age. His back-lift was composed in its entirety with his wrists, his hands still level with his waist and close to his body.

His innate trigger movement was to go back and then step forwards as he flicked his wrists. By the moment the ball was released, his front foot was already hovering in the air with the bat serving as a pivotal counterbalance. From that position he found it a matter of course to drop the bat onto the short ball, and hit it pretty much where he wanted

Tough-as-nails, aggressive, gutsy, vocal and fearless – Ricky Ponting was as Australian as they could possibly come. But above all he was a junkie among the junkies for contests. Adroit with the mental toughness and adorned with the skill-set to tackle pressure, Ricky Ponting lived up to challenges with the bat which most others would rather choose to steer clear of. His batting credo was centred on dictating terms with the bowlers and forcing them into submission.

Ponting was arguably the best player of fast bowling in his apogee alongside being a gun of a fielder. Be it the slips, cover, point or silly point, he was an epitome of what they call an all-round fielder. From pulling off blinders to hitting stumps from the unlikeliest of angles – he was the jack of them all.

The ability to make a statement even when not playing a shot by simply leaving the ball outside off stump, with the same urgent footwork bore testament of his sheer intent and staunch perseverance.

“Every ball, my first thought was four, then three, then two, then one, and only then a dot”, he said. His trademark pull shot, famously referred to in the cricketing folklore as the “Ponting Pull” was more often than not executed to deliveries far fuller than most players would dare think of playing.

“The straight drive was very important to me too, because it was saying to the bowler, you can’t be short and you can’t be full. Basically I felt that he had a spot of about nine inches that he could pitch on to make me defend.”

The pull was more than just a treasured shot for Ricky Ponting. It was the skeleton that allowed him to explore rest of his game, the pylon of his dominance. No one was fast enough to stop him from rocking back and pulling or hooking the ball. Hell he even executed those shots off the front foot with remarkable ease, an aptitude regarded as an anomaly in cricketing textbooks.

Let not the heavy panegyrics of his pull shot trick you into thinking he had a lacklustre array of shots. While his swivel pull shots were a treat for the eyes, his pristine cover drives were just as immaculate. His clinical back-foot punches on tiptoes to guide the short balls just forward of point had class written all over them.

Ponting is the only Australian to score 20,000 international runs and is in a safe abode as the nation’s highest run scorer in both Tests and ODIs. He is also the second highest century maker in the game’s affluent history with 71 tons to his name. But more than anything else, he was a through and through leader who was pivotal in Australia’s conquest of the world in the 2000s.

When captaincy finally dawned on him in 2002, he made sure his batting prowess didn’t take the sacrificial downsize for the most part. Sure his form dipped towards the very end of his regime, but from 2002-2009 he amassed an insane 49 international centuries. During the same time period ‘The Mighty Aussies’ won 2 back to back world cups undefeated, won 2 champions trophies, drubbed arch rivals England 5-0 in the Ashes and were the number one team in both the formats for the majority of the time.

While he did make a name for himself over disciplinary issues, even getting axed from the squad once for getting into a brawl in a bar, Ponting was quick to pick himself up and metamorphose into the leader he has been for nearly a decade. Sure his obsession for victory did earn him a few infamous incidents but for most other times he was a polished press conference performer, answering questions as candidly and honestly as he could.

Many a times when his team or a team-mate wasn’t having the best of times, Ricky Ponting would go on to make a statement or do something that would shift the focus to himself. Intentionally or not, he was able to carry the burden, and often turn it into success.

Ponting won more international games than any other player. 377 to be precise and he was captain in 220 of those. Of his 71 international centuries, 54 were in winning causes. It was indeed under his leadership that Australia went on to win 16 Test matches on the trot for only the second time in history.

Speaking of match winning knocks he has scored quite some memorable ones for his fans to salivate over. His swashbuckling 140* in the 2003 World Cup final blew away the Indians before the match was even halfway completed.

His magical 257 at the Melbourne Cricket Ground in 2003 helped Australia pulverise India by nine wickets.

His surreal 196 in the Ashes opener at Brisbane allowed Australia to dismantle England by 277 runs.

Not to forget his twin centuries at the SCG on his 100th test that single handedly brought the Proteas to their knees despite trailing after innings.

Perhaps his most remarkable attribute as a batsman was the remorseless way he went about batting when Australia were at the pinnacle. An ordinary player, with stars like Matthew Hayden, Justin Langer, Damien Martyn, Shane Warne, Glenn McGrath and co in his team would have shown traces of complacency and boredom. But not Ponting. He never settled for anything less than his cut-and-dried hungry look as if he had a score to settle with the rest of the world. His insatiable appetite for runs and the high price he placed on his wicket made him a true force to reckon with.

Ricky Thomas Ponting in all his glory most certainly qualifies as one of the greatest batsman of the game. In the history books he is distinctly recognised as the most successful cricketers to have played. If Sachin Tendulkar’s genius made the cricketing world gloat in incredulity and Brian Lara’s dazzling flourish had the opposition scratching their heads, then Ponting’s sumptuousness coupled with his pursuance for runs make him a rhapsodic run-scorer for his country. 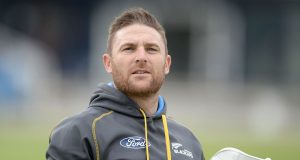 Baz: A Tribute To Brendon McCullum

Dev Tyagi - September 27, 2018
0
No tribute to Brendon McCullum can ever be complete without mentioning what he brought to the sport. Faith. Isn't that the most critical thing about everything...