December 18, Adelaide, Day Two. Indian fielders’ butterfingers were on exhibition. To make things worse, Steve Smith survived a run out. The scoreboard read 45 for two in the 27th over (the first from Ravichandran Ashwin). Australia were snailing with the No.1 and No.4 Test batsmen at the crease. Marnus Labuschagne was the beneficiary of the dropped catches, while the batting monster Smith was buying time at the crease.

Trivia: India have dropped 54 catches in the past two years in SENA (South Africa, England, New Zealand and Australia).

Ashwin bowled two off-spinning deliveries to the batting master, very different from how Nathan Lyon started to draw the batsman forward from outside the off-stump. Ashwin pitched it a lot closer to the stumps.

“Shouldn’t he take a leaf out of Lyon’s book?” many minds thought underestimating Ashwin’s intelligence.

Then arrived the one that held its line due to side spin and skid through straight along with extra bounce, kissing the outside edge of Smith’s bat en route to Ajinkya Rahane at the first slip.

“I just nicked one that didn’t spin; unfortunately, that happens sometimes. I thought it was pretty well bowled, to be honest. The two balls prior spun a bit and got a bit grip of the wicket and the next one was kind of side-spin which skidded off. I didn’t play as well as I would have liked. It was some decent bowling,” Smith, the best in the world, would later tell ANI.

The last time Smith fell for a score as low was the duck he registered against the visiting South Africans at Perth in 2016 and had averaged almost 73 since till this day.

Ashwin and Ravindra Jadeja have picked Smith four times each in Tests. However, this was the first time it happened on the Australian soil.

Calling Ashwin a big threat, Smith continued, “Playing in Australia and playing in India is a bit different; the ball doesn’t spin as much as it spins in India. He is a good bowler; he has played a lot of cricket now. He is a world-class performer. I know he got the better of me the other day; hopefully, I will learn something and move forward and play him a little bit better in the next game.”

Later in the Test, Ashwin would win the mental battle against Travis Head and debutant Cameron Green with classical off-spinners’ dismissal. His four-for gave India a glimmer of hope in the Test where they were thrashed by eight wickets despite securing a first innings lead.

The off-spinner provided India with a real chance at Adelaide. He’s India’s highest-ranked Test bowler. Does that secure his place in the Indian line-up as the first-choice spinner outside subcontinent?

Not quite. Ashwin wouldn’t have played in Adelaide had Jadeja been available for the Test.

He has done well to secure a spot for the Boxing Day Test. But as the case has been, an off show can see him lose his place as India prefer playing only one spinner outside the subcontinent. In recent times, Ashwin has lost the preference to Jadeja.

On the surface level, Ashwin’s records are enviable. He has 370 wickets from 72 Tests at 25.27. A player with such numbers ought to play everything.

Cricket legend Sunil Gavaskar expressed his displeasure with the unfair treatment meted out to Ashwin in his column for Sportstar.

“For far too long Ashwin has suffered not for his bowling ability of which only the churlish will have doubts, but for his forthrightness and speaking his mind at meetings where most others just nod even if they don’t agree,” wrote Gavaskar before adding how rules seem to be different.“Any other country would welcome a bowler who has more than 350 Test wickets and not to forget four Test match centuries, too. However, if Ashwin doesn’t take heaps of wickets in one game, he is invariably side-lined for the next one. That does not happen to established batsmen though. Even if they fail in one game, they get another chance and another and another, but for Ashwin the rules seem to be different.”

Why isn’t a quality spinner like Ashwin the preference anymore? Is it what Gavaskar believes, or there’s more to it?

Jadeja vs Ashwin – Outside subcontinent

There’s not much to choose. One Jadeja advantage is his fielding, which Ashwin compensates slightly with his wicket-taking strike rate.

Tests outside the subcontinent since 2018

The above tables reflect what makes Jadeja a more suitable candidate. While Ashwin’s batting has had a considerable fall from where it started, Jadeja’s picked up.

Like in the past, India’s bowling hasn’t let them down overseas. Instead, the batting has been a big concern. With a long tail to follow, if someone can get you runs down the other, it’s an asset.

It’s clear that Ashwin is getting better but apart from his faltering batting, what hasn’t helped India is his tryst with ill-timed injuries.

The England tour of 2018 was shaping as a series where Ashwin was proving himself to be a bowler who could win games in all conditions. Before the fourth Test at Southampton, Ashwin had sustained a groin injury and was advised complete rest for five days.

Despite no practice and not being 100%, he agreed to play the Test on a surface that would assist spinners. The ploy backfired. Not only Moeen Ali spun England to a win, but Ashwin put a sorry show in comparison. He also aggravated the injury that forced him out of the final Test.

India had secured a first innings lead at Southampton. What they missed was a fit spinner who could capitalise on it. The defeat meant India had conceded the five-Test series 1-3.

A few months later, Ashwin’s heroics in the Adelaide Test of 2018 etched another famous win for India. He bowled almost bowled 86.5 overs in the Test, gave away just 149 runs and picked six wickets. He also scored a vital 25 in the low-scoring game.

Before he bowled in the second innings, he had torn the abdomen muscle – a grade three tear. He had tablets to counter the pain and bowled a marathon spell of 52.5 overs, without which India could not have won.

What followed were painful nights as he played no further part in the Test series that India won 2-1, marking their first-ever series win in Australian soil.

As Ashwin nursed one injury after another, Jadeja returned to the limited-overs setup. His batting only got better as he made a strong case for himself with good all-round shows. Of course, in the home Tests, India continue to rely on the Ashwin-Jadeja pair. But Jadeja started in the West Indies, playing three out of the four Tests that followed until the New Zealand tour.

“If he can vary the pace in the 80s with the occasional quick one or a real slow one, and focus on overspin, he can beat the batsmen in the air,” South Africa’s performance analyst Prasanna Agoram told Indian Express ahead of the first Test.

Ahead of the Test series, Agoram, who has worked with the Indian off-spinner in the Indian Premier League (IPL) and Tamil Nadu Premier League (TNPL), predicted that Ashwin would pick at least 20 wickets in the four Tests in Australia.

He has already got five in the first Test.

The Boxing Day Test at Melbourne may see a rare instance of Jadeja and Ashwin starting together. It seems Jadeja’s improved batting provides management with the confidence to take the risk. However, this solution isn’t long-term.

Into the tenth year of his Test run, Ashwin is a much-improved bowler. Bad luck with injuries coupled with a string of inconsistent run overseas may have altered his success outside the subcontinent.

With Smith and Labuschagne in the hunt and David Warner returning soon, the rest of the tour for India will not be easy, but that’s what international cricket is all about. And it’s thriving against the odds that create legends. Also, Ashwin’s skills with the willow are well known, and it’s time, he utilises his batting to the fullest.

Even Muttiah Muralitharan, the greatest off-spinner in the sport, has 12 wickets from five Tests in Australia at an appalling 75.4. Ashwin has 32 from eight Tests at 42.8.

Here’s Ashwin’s chance to craft his legacy. If he manages to pull off another stellar show, he can silence many and blunt many axes that loom over. 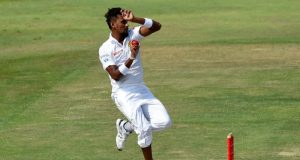 Abhinav Bose - August 17, 2018
0
Fast bowlers have always had a quizzical connection with the game. Such are the demands of the skill in question that it has a...