The South Africans need a warrior,

One who now, more than ever, can break any kind of barrier

Amid this wave of transformation, they need someone who can navigate the ship, especially amid turbulent waters,

And to that, one reckons, there can be only one,

Someone who can score, and provide a healing touch to wounds that have tuned sour

At a time where to save a vital DNA of Cricket, the board would wanted to have had a pact,

Leaving behind all the opportunities to may hay

But must we not forget,

One man stayed back to behold the southern-most part of Africa,

To its naysayers- it’s a nation engulfed in petty politics- amid some decay,

But for those who recite endlessly, deep into the night, a prayer reads- Proteas Fire,

The nation is better known as South Africa

Steering no longer as the captain, is this man who at 36 measures 199 on 200 in commitment

For he’s someone who, in the last 18 months, has seen a lot

Might’ve been torn inside, felt let down, yeah something like that would’ve been his thoughts

The runs, the power, the muscles and that composure

One can see are are still around

And each time the ball goes to the gap, is hit over the fence, or is even shown the dead face of the bat,

With a minor twitch of the muscle,

Faf du Plessis rises to the fore and does the hustle

For to him steering South Africa out of crisis, like the great Dean of the Protean University of batting does,

Is the meaning of every mission accomplished, not left undone

And in doing so, he often slows, even trips, suffers pain, but goes uncomplainingly about his job

That, you mustn’t forget, isn’t to offer an angry grunt or prove anyone wrong

Let’s rewind the clocks back to 2012, where it all started, before the legend- or should one say of the unsung- Faf du Plessis was born

The occasion was big, the opponent even bigger, the destination- the lion’s den, one could say,

Heck, Australia even back then, were too strong,

Not that the team facing the Kangaroos were clueless mice

How could it ever have been when there was a Amla, de Villiers, Kallis and even more,

Though, in the end, it all came down to one man who hung in there when the others just didn’t how to anymore,

And with great determination did Faf du Plessis conjure

Those unbeaten 110 runs, compiling a century (a maiden one)

But over and above match- a match-saving ton

Frankly, what he did almost a decade back, is pretty much what

Faf du Plessis does even now

Playing the bodyguard with fab muscles, being the wearer of a proud jersey amid fans and critics who aren’t holier than a cow

For who bowed out back in the day, many moons ago, were giants like Kallis

And then, came those who walked into the sunsets like Amla, Morkel, Steyn, Philander,

Precisely that is where one man has been through it all, seen things, witnessed transitions first-hand

For that is way of the fighter, someone whose personal milestones have even coincided with his team’s wins

That recently the Sri Lankans suffered big was evident,

Remember how shaky South Africa were at 200 for 4, only to find stability not too long after….

Faf arrived to the crease

Probably it didn’t occur to many, that in the process of missing out on a maiden double ton, he went past 4,000 Test runs

But never did once over-celebrate; well that’s how Faf du Plessis is, his choice

Not that those who notice Faf’s contribution, just as much, if not more than the great Elgar weren’t

Would have, in front of the magnanimity of the effort of the 199, stayed numb

To scathing criticism that often rests with Faf du Plessis

Whose more than the length of his biceps, the repetitions of the hammer curls in the gym, and is sheer ecstasy

They might be in Africa, might not be every fan’s team of birth, but South Africa is everyone’s- not mine or yours

Truth be told, Faf du Plessis was the man who hammered NZ in 2015 WC semis, before his team got hammered in return,

Though on his part, he constructed a handy fifty,

He always wears the dashing green with pride,

And never eschews the desire to go an extra mile

Where he was the only one, to raise the only century for a team where none managed one

Probably that is why this stylish stud of South African cricket will remain the only one; a man-lion who batted then and is still batting with a sense of purpose

At a time where it takes a few seconds for people to succumb to the divide,

That is why the hope is to see this eternal battler from Madiba-land to walk many a mile! 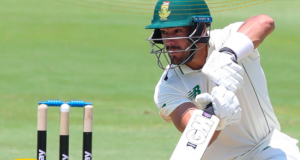