To rise from the ashes, when your detractors have you all but buried is worthy of every praise.

Even Proteas coach Mark Boucher would second this. What transpired recently when South Africa, who failed miserably against the visiting Lankans (2019) in Tests could well read like the following:

The detractors had reason to show the Proteas their burial ground owing to a lacklustre performance against England in the recently half concluded series – whitewashed three nil in the T20Is, the other half (ODI leg) cancelled due to the buzz word COVID.

Add to that the uncertainty surrounding the Sri Lankan series in these difficult times with bio-secure arrangements and all that goes with it.

Well, the Lankans finally did tour with the hope of repeating their 2019 pursuits of achieving the magical hurrah on Southern African soil albeit what happened next was not only encouraging to me but also every South African fan who wants to see this Protea team soar.

The Proteas not only beat the Lankans but annihilated them in the two tests at the Highveld.

A two-nil whitewash of the Emerald Nation with an innings defeat in the first test and a ten-wicket demolition in the second was the result of the superiority that this Proteas outfit commanded.

Some critics might say Sri Lanka was rather depleted with the injuries they sustained at Centurion in the first test, batters Chandimal and de Silva and the bowlers in Rajitha and Kumara watching from the side-lines but truth be told the way the Proteas played was every bit the mould of what Champions are made of.

If inflicting an innings and forty five runs defeat when you have lost the last three test series and eight out of the nine tests played is not miraculous, then I don’t know what is?

Yes, that’s exactly what this rejuvenated Proteas outfit did along with winning the second test by ten wickets thanks to the following lieutenants:

Dean Elgar – The player of the series with 253 runs at an average of 126.5. The man is not called little Biffy just for nothing as he has taken the opening mantle from the original Biff, Protea stalwart Graeme Smith and rolled with it more than ably.

Francois du Plessis – Truth be told, one felt that at 36, he should focus more on limited overs cricket, but boy did he prove me wrong with the amazing, swashbuckling 199. I totally take my words back and he surely is the main middle order bat. Faf, play the longest format for the next ten years. You’re simply awesome.

Aiden Markram– The stylish top order bat has certainly found his guile, with a well crafted 68 in the first test and a 36 in the second to register a ten-wicket win. In my humble opinion he should be given the long rope as Elgar’s opening mate in the test series to follow.

Temba Bavuma -His 179-run partnership with Faf in the first innings of the first test was the corner stone for the Proteas to mount a massive 621, when they were slightly faltering at 220 for 4 losing three quick wickets. In the bargain, Bavuma also scored an impressive 71. For me he needs to amass more three figure scores as that unfortunately only stands at one from his debut almost five years to date.

For me, he would be the all-rounder that the Proteas have been searching for at least a decade to come. At only 22, to bowl an immaculate line and length with incredible control is testament to his maturity as a cricketer and his batting prowess is also second to none. Having taken nine wickets in the series as the third highest wicket taker, he surely is a find.

Anrich Nortje –If you thought this Warriors’ boy was only about raw pace, thing again. With his clever control, he surged as the highest wicket taker in the series with 11 scalps at an average of 23 apiece. A find for the future, the Proteas should surely stick with him in all conditions.

Lungi Nidi – Having lost a yard of piece, this Titans’ towering pacer has made that up in control and the clever change-ups. The perfect opening foil for Nortje, his four-wicket halt in the second innings of the second test was crucial for the Proteas to keep the Lankans in check.

Lutho Sipamla – No Kagiso Rabada for the series, well who’s complaining? A more than able replacement in Lutho Sipamla had a debut series with being the second highest wicket taker taking 10 scalps at 16 apiece. A debut of what dreams are made of. His capability of cleaning up the Lankan tail was seriously impressive. Certain find for the future.

What gives me immense pleasure is the depth that the Proteas have in their bowling resources, with a Migael Pretorius and a Glenton Stuurman still in reserve. This certainly harbours well in the series to follow.

With praise also comes criticality, the nine wickets the Proteas lost for just 84 runs in the first innings of the second test was a bit alarming. It certainly raised questions on the middle order with Mark Boucher and Quinton de Kock having lots to ponder.

Also, as a diehard Protea fan, I certainly feel Quentin de Kock is burdened with the additional responsibility of the test captaincy which showed in his batting.

The selectors should surrender this interim captaincy arrangement and possibly appoint Dean Elgar in my view as a permanent skipper.

His experience and batting credentials speak volumes matched with a good cricketing brain.

This would also harbour well for de Kock who we know to be an aggressive bat in test cricket and his focus should solely be on his batting and keeping game.

Credit must also be showered on some Lankan players, the likes of Kusal Perera amassing two fifties in the series and the captain Karunaratne who scored a decisive ton in the second test.

With the Proteas authoritatively registering some much-needed points on the World Test Championship table, I quietly feel confident on their chances against Pakistan and Australia in the series to come. 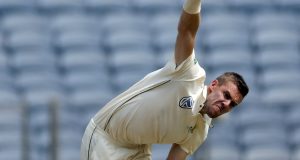 Anrich Nortje: A Whiff Of Spark For The Protea Fire

Pranay Rangra - January 27, 2020
0
Anrich Nortje. Remember this name, in the otherwise gloomy and rather disastrous showing by the Proteas who have been tamed by the more sensible and...