A comeback is not a comeback unless and until you demonstrate something great. And that great could be in a normal routine game or could well come through in a big match stage. But when Shakib Al Hasan took the field against the West Indies on January 20, in the opening ODI, it was more than a great comeback. Not special, but great.

The last anyone saw Shakib Al Hasan before the stirring international ban came about was in the 2019 World Cup. Bangladesh had a rather bleak outing in that game against Pakistan.

But if there was someone who stood out even as his team suffered big (in an age where batting usually looms large over bowling, a ninety four run loss was huge), then it was Shakib Al Hasan.

After Imam and Babar heaped lots of runs, taking Pakistan to 315, only Shakib Al Hasan stood tall scoring 64 of his team’s 221.

Sadly, that would be the last anyone would see of the left-handed batsman. He had failed to report corrupt approaches to the ICC.

But well after a year, as the familiar fighter of Bangladesh emerged on the pitch once again, there was literally nothing that Shakib Al Hasan failed at.

From the bat, one that usually excels in both accumulation and acceleration came nineteen runs made rather watchfully from forty three deliveries.

From the golden arm that’s grown used to flummoxing batters came the game-changing spell of four for eight.

Let that very miserly spell- well misery-inducing for West Indies no doubt- hold your attention especially at a time where little is reserved for any other series with India excelling against a daunting Australian line-up.

That 4 for 8 by Shakib, easily his best ODI bowling display since that immaculately well-controlled 5 for 29 (a shining performance that also came through in CWC 2019) was the major spoiler for Windies fans.

Fans of a country that has made quite a reputation for misconduct with both bat and ball. How else are you going to summarize the showing in both departments of the game for a team that’s grown in notoriety at failing miserably?

Just that when a young, ‘close-to-clueless’ West Indian side lacking not just the familiar make-up of experienced white-ball hitters but familiar energy squared against Shakib Al Hasan, somewhere in the cricketing universe it was a mishap not a clash as such.

It was a rabbit being laid bare in front of a lion.

Guess what, it didn’t take the predator a great deal of time to polish off what seemed a light meal.

Yet Shakib, the bowler known for both- the flighted ones and those bowled quickly through the air- didn’t seem to lose the bite.

There was much turn on offer under what were unfailingly overcast conditions.

As cricket lovers, saddened by a helpless show of a young side but rejoiced by what Bangladesh’s icon had to offer, nothing had changed.

The desire to succeed was still there.

And goodness me, this second-grade West Indies team- with Sunil Ambris, Rovman Powell and Alzarri Joseph- as its most familiar names has five more games ahead.

What’s on your mind Shakib: is a carnage in the offing? 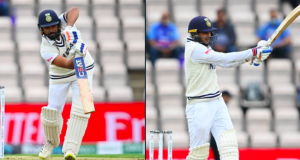 Charudatt Prabhu - June 19, 2021
0
The masons have laid the foundation before it got dark. Their colleagues are now building on where they had left. Before bad light stopped cricket,...