Akin to the White House, the venue of a historic change of guard a few hours ago, the Gabba was the place to be if you were a cricket fan on January 19.

A draconian government on its way out with a promising administration stepping in signalled a mighty transition, one that had a parallel in the cricketing events taking shape on Australian soil.

But there was something more to the event that made for interesting observation.

While Biden and team were abundantly visible throughout the oath-taking present on a dais to which millions of eyeballs were glued, there was one member of the victorious Indian side who allowed himself to be somewhat overlooked standing in the background.

Like that blazing concert featuring your favorite band, the headlining material is formed not only by rhythm and music but the artist who leads from the front- not withdrawn in the background – isn’t it?

In the context of the game, he had contributed 81 runs but in the effort of the victory, forged as a result of India’s steely second inning fightback, he was responsible for 56.

Make no mistake. Gill, who debuted this very series, fired 91 while Pant, the man whose bat produced the winning runs struck 89.

Yet, in the aftermath of Day 5, news reports, and later, several YouTube analysis of India’s enthralling- very unlikely but spirited victory- heaped lots of praise on that 56.

That’s the thing about great men; even when they know they can proudly hold onto their space, they willingly step in the backdrop.

As the world media gravitated toward a young team’s celebrations, it was easy to see a quartet of the overjoyed Rishabh Pant, Shubhman Gill, and Siraj in the front row, flanked by their sincere captain.

But a certain Cheteshwar Pujara allowed himself the comfort of the last row sporting that very endearing smile.

More important to him, it seemed, was the time to allow the youngsters to form the highlight even as his contribution in raising the victory flag was second to none.

Perhaps it was only more fitting to reflect on the warm smile in the aftermath, one hinting at satisfaction that the job had been done for in the hours before, all that prevailed was boundless tension.

Instances where the pitch has probed Pujara’s team have been too many to reflect upon.

Two summers ago, in England, contending with a bouncy Southampton pitch, and the hosts’ 246, it was Cheteshwar Pujara who led the way with a 132, thus enabling his team early lead.

What most remember-to this date- is that the 2018 series yielded another disastrous result for India. But what most don’t is that even in the Test India won thanks to Kohli’s genius at Nottingham, it was Pujara who held the crease for 208 deliveries for a fighting 72.

Let’s go a year further back.

On February 25, 2017, witnessing his team’s epic downfall at Pune that handed Australia a 333- run win, it was Pujara in the middle of a storm once again.

On the same turning track where Steve O’Keefe bullied his teammates to a match-winning performance, Vijay, KL Rahul, and Kohli scoring 25 collectively, Pujara did as well as delaying the inevitable.

But question that’s since then gone unanswered is:

Had Cheteshwar Pujara not allowed himself to play in for those 31 vital runs, would India have even touched 100?

In the better part of last half a decade, the perspectives about Cheteshwar Pujara haven’t quite changed, whether or not he has made runs.

That he bats too slowly and that strike rate needs to get a move on have too often dominated charts.

Something’s as they say, don’t change.

Those who can easily imagine the Test team minus the familiar #3 may never want to get a medical test done for excessively consuming T20 or fast-paced cricket.

In reality though, there’s quite a lot that has changed with Pujara batting the way he does, slow that it may be.

It was in 2018, with Virat Kohli in the side that Cheteshwar Pujara played the sheet anchor role as India beat Australia 2-1.

Not only did he score top score with 521 runs, but scored 3 centuries. His strike rate that series was 41.

The only big change on this occasion, with India winning in 2021, is that Pujara’s strike rate was around 29.

Sure he took his time but just how nefarious a result did it bring his team?

What didn’t change, however, and perhaps something that the self-anointed critics need to emphasize truly, are the team’s results.

Pujara, who had the lion’s share of contribution in grinding Australia in 2018, still scored for India when it mattered this time around.

While the runs column was devoid of a century, something you’d consider “room for improvement”, there still were 3 valiant fifties. The last of which has its own importance albeit unreserved as such for a player who so easily eschews the desire to have his share in the team’s glory.

Generations to come, who’ll hear about India’s inspirational 3-wicket win will perhaps be routed to that gallery of fanfare where there rest the least quantum of diamonds but with the mightiest sparkle of them all.

Treat it like a visit to a museum where against Pant and Gill- two true heroes Down Under- the number of diamonds studded in their respective hall are equivalent to the runs scored.

Actually, of the 582 deliveries that India faced, braved, Pujara stood firm facing 211 akin to a firefighter in midst of a rescue operation.

What many will possibly conveniently forget is that 56 at Brisbane just as to many it didn’t strike he recently also brought up 6,000 Test runs.

But what many shouldn’t is that being fully aware of the odds at stake Cheteshwar Pujara bravely held onto an end alone. Only so, the other fluent scorers could play themselves in, express themselves freely. 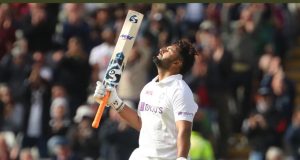 How Rishabh Pant Was India’s Brightest Spark In An Otherwise Dull...

Saksham Chugh - July 5, 2022
0
How India lost the Edgbaston Test by seven wickets despite having a 172-run lead in the first inning...