It’s been a few days since the Indian team’s miraculous 2-1 series win over Australia, their second successive Test series win on Australian soil. And it still hasn’t sunk in for a lot of people. Just for the fact that, the Indian team was put up against so many adversities and yet, they found a way out.

There were injuries left, right and centre. Skipper Virat Kohli flew back home for the birth of his first child. India used as many as 20 players in the four-match Test series. Every game had a slew of changes. While a few of them were tactical, most of them were forced. Despite all that, India were able to produce magical performances throughout the Test series.

When India were shot out for 36 and Virat Kohli, there were a lot of questions on how they would bounce back and did they even have enough in the tank to do that. Well, they did well more than that. To win 2-1 after being 0-1 down after the first Test and on the back of that 36 allout, it is a remarkable feat.

Out of the 20 players that India used through the course of this Border-Gavaskar Trophy, there were five debutants (Shubman Gill, Mohammed Siraj, Navdeep Saini, T Natarajan, Washington Sundar). Shardul Thakur had bowled 10 balls on his debut and played his second match in the fourth Test of the series. Prithvi Shaw had played four Test matches prior to this series while Hanuma Vihari had played 9. Agarwal, Pant and Bumrah played 11, 13 and 14 respectively. In fact, in the fourth Test at the Gabba, India’s bowling attack had an experience of three Tests and 10 balls. They had a mere 11 Test wickets between them.

With so much inexperience and lack of international cricket in the squad, a lot of people might well be wondering on how this was even possible. People had written India off.

Multiple first-choice players ruled out at different stages of the series, their best batsman and captain missing three Tests, off-field worries (quarantine troubles, alleged bio-bubble breaches, racist remarks from the crowd) and yet, this team stood up, took blows, fought it out and when the opportunity presented, they landed knockout blows and got over the line.

When Mohammed Siraj made his debut, it looked like he had been playing Test cricket for years now. Same was the case with Shubman Gill. Washington Sundar and Shardul Thakur looked like players who’ve played 15-20 Test matches already. And that is because of what the Indian team has put in place in it’s domestic structure. Players coming into the side just don’t turn up and look ready for international cricket.

Pakistan veteran Mohammad Hafeez made a very valid point in one of his recent media interviews when he was asked about India’s performance in Australia. He felt India’s system ensures that the players are groomed into finished products. But the same isn’t the case with Pakistan and hence, you see players showing promise but failing to live up to the hype.

“In international cricket, it’s not just about the talent with bat and ball. I believe for international, it’s not just about the talent of bat and ball, it is the finished product that plays. The reason why India came back from being bowled out for 36 and went on to win the series despite their captain not being available or so many players injured is because their new and young players are groomed properly into finished products,” Hafeez was quoted saying.

Hafeez talks about the importance of processing talent and how India won the series against Australia. pic.twitter.com/7H7VkM8iwG

The gap between domestic cricket and international cricket is quite a bit and that is a known fact. There are very few players who come in and started with a bang and maintained at that level. Players gradually grow into themselves, understand their game better and hence, that’s why they say experience matters. There is a difference between talent and the finished product, as Hafeez mentioned.

That is where India is bridging the gap. People may credit the Indian Premier League (IPL) for the way it has groomed players and given them the platform to perform under pressure and showcase their skills to the world. Yes, it may be partly right. But it is the Indian first-class and India ‘A’ system that needs high praise here.

You see the number of ‘A’ tours and Under-19 tours that India have every year. Since 2010, India ‘A’ have played a staggering 52 first-class games which is the most for any team around the world, by some distance. Between the 2018 and 2020 editions of the Under-19 World Cups, the India Under-19 side played 31 games. India have different age-group teams travelling around as well. In fact, there is hardly any team that gives ‘A’ cricket or age-group cricket so much importance.

And these teams just don’t play in India when other international teams travel for their tours. These teams have their own tours. India ‘A’ have a couple of tours almost every year.

Look at the above tweet, Siraj has played 16 first-class games for India ‘A’ while Saini has played 14. Vihari and Agarwal went through the India ‘A’ grind as well, playing 12 and 10 games respectively before making their Test debuts. There are multiple other players who are currently going through the India ‘A’ grind and are waiting patiently in the wings. Priyank Panchal, Abhimanyu Easwaran, Shahbaz Nadeem, Jalaj Saxena and the list will go on. And these players are not IPL regulars. Yes, the Pants, the Gills, the Bumrahs have emerged from the IPL but they went through the grind of domestic cricket as well.

For instance, it’s a misconception that Bumrah was found from the IPL. Yes, the IPL did act as a launchpad but he played 37 first-class games before making his Test debut for the Indian team. Pant and Gill played a host of red-ball games and were around for a couple of years before they made their Test debuts. Agarwal broke the selection door by piling on a mountain of runs for two years and it was only an injury that gave him an opportunity.

A lot of people spoke about No Kohli, No Ishant, No Shami, No Rohit (for the first two Tests) and how would India even compete. What people didn’t realize the process and the work that was going on behind the scenes for a few years.

And to a lot of people’s surprise and astonishment, the new crop of players delivered for the Indian team despite not having a lot of international experience behind them. They stood up under pressure and reacted as though, they’ve been playing international and Test cricket for years now. The Sirajs, the Gills, the Pants, the Sundars, the Thakurs were the ones who were absolutely vital in helping India retain the Border-Gavaskar Trophy.

So, the question now comes up, isn’t this the way forward for other countries as well to follow what the Indian team has been able to demonstrate?

You see a lot of cricketers from Pakistan cricket coming up the ranks at a very young age but they fade away and Hafeez said in that interview, “Unfortunately we [Pakistan] don’t have a system which can make finished products which are now essential in modern day cricket. That is why so many of our young players fail to succeed at the international level.” That is the case with players from quite a few countries.

India’s system of blending in the new crop of players has its own process and that reaped rewards in Australia in the recently concluded series. It didn’t matter if there was no Kohli. This Indian team still had the fight, resolve and the temperament to get the job done. It showed that the next crop of players are ready to dominate and take over world cricket. 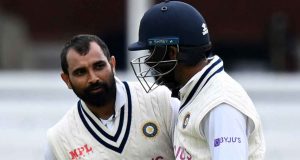 Sahil Jain - August 17, 2021
0
When Mohammed Shami and Jasprit Bumrah batted their way through a defiant and stunning 89-run stand that couldn’t be broken, it was...