Talent- there’s plenty of it. Skill and application-both accompany it. Anyone wondering just how often the phrase-“the Indian team is so strong because there’s hardly a dearth of genuine talent around,” mustn’t be surprised. This is for the simple reason the domestic scene is flourishing with key names that are always trying to make the big cut.

Given the huge potential the youngsters have and just how talented they are here in India, it’s hardly a surprise that at the same time, there could be several vying the top spot as a batsman or as a pace bowler or specialist spinner.

The raw skill undergoes a process of vital transformation in the bustling domestic cricket scene, the end beneficiary in many cases being the Indian Team: the final destination for countless hopefuls.

And the sheer fact that it’s not a new development but since a while that it were the youngsters who paved way for the Indian Team’s resurgence, especially under tough conditions, that actually supports this fragment of undying truth.

One great example of this is India’s triumph in the Border-Gavaskar Trophy between India and Australia. India played excellent cricket, that too with many of the big players missing in the XI. The likes of Washington Sundar, Shardul Thakur, Mohammad Siraj, and especially T Natarajan. These players gave some tough time to the full-fledged Aussie side in their own backyard without any experience of test cricket and it shows how good our domestic circuit is. The Ranji Trophy, SMAT, Duleep Trophy, the IPL, et cetera have played a huge role in finding and developing new talents in the county.

That said, let’s attempt to understand some players who have shown serious promise and stand a great chance to break into the Indian team soon:

Ishan Chandranath Porel is a young 22-year fast bowler from Bengal. He made his List A debut on 25th February 2017 against Andhra in the Vijay Hazare Trophy and his First-Class debut on 9th November 2017 against Vidarbha in 2017-2018 Ranji Trophy for Bengal.

He was picked up by the Kings XI Punjab in the IPL 2020 auction but he didn’t get to play any game that season. He is the highest wicket-taker in the ongoing Syed Mushtaq Ali Trophy (SMAT) with 13 wickets in 5 games. Porel has already shown a lot of promise and he has what it takes to succeed on the biggest stage, especially in the longest format.

Sheldon Jackson made his List A debut for Saurashtra against Baroda on 16th Feb 2006 and his First-Class debut on December 21st against Railways in 2011. Jackson is a senior player in the domestic circuit and has performed very consistently over the years. He has 5634 runs in 76 First-class games at an average of 49.42 and he has 19 centuries to go with that. He has scored 1869 runs in 55 List A games averaging 36.64.

He moved to Puducherry from Saurashtra ahead of the 2020-21 Ranji Trophy.

He was the fifth-highest run-scorer in 2014-15 Ranji Trophy. Jackson scored two centuries in two consecutive days in 2015-16 Vijay Hazare Trophy. He was picked up by RCB after a good domestic performance in 2012-13 and after that by KKR in 2015. He has scored 230 runs in 5 games of the ongoing SMA Trophy at a whopping average of 115.50 and a strike rate of 154.36. Jackson has been a consistent performer and is looking in great touch coming into 2021.

The young 25-year-old wicket-keeper batsman from Tamil Nadu, Narayan Jagadeesan is already in the limelight in 2021. He is the highest run-scorer of the Syed Mushtaq Ali Trophy 2021 with 315 runs in 5 games with 3 half-centuries. He is averaging 157.50 currently with a strike rate of 148.58. The right-hand batter is technically very sound and has been scoring runs very consistently for some time now.

He has played 23 First-Class games since his debut in 2016 and has scored 1174 runs at an average of 39.13 and has 4 centuries and that many half-centuries. He was bought by the Chennai Super Kings in IPL 2018 and made his IPL debut last year against RCB. He was the highest scorer in 2019 TNPL with 448 runs in 10 games. The wicket-keeper batsman from Tamil Nadu is certainly one to keep an eye on in 2021.

Lukman Meriwala is a 29-year-old left-arm medium-pacer from Baroda. He made his List A debut against Mumbai on 14th Feb 2013 and was the leading wicket-taker of the 2013-14 SMA Trophy which Baroda won. He has 59 wickets in 17 First Class games with three 5-for and one 10 wicket-haul to his name and averages 20.77. He also has 39 List A wickets in 31 games.

Meriwala being a left-hand pacer can be very crucial for India in the future, if groomed properly and he has the potential to join and take forward the great fast bowling club that we have in tests at the moment.

Ravi Srinivasan Sai Kishore is a left-arm orthodox bowler from Tamil Nadu who made his List A debut on March 12th, 2017, and his First-Class debut on October 14th, 2017 and he was the leading wicket-taker for Tamil Nadu in next year’s (2018-19) Ranji Trophy with 22 wickets to his name. He was picked up by the Chennai Super Kings.

While these are just five of the many names who will try to break into the Indian team, watch this space out for more developments as we will cover this space again. 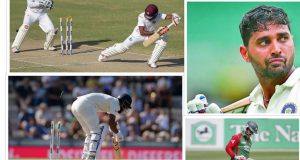 Babasish Nanda - January 7, 2019
0
Ducks and single-digit dismissals galore as opening the batting in Test cricket reached a new low in 2018.  “Oh, it was such a bad...