The biggest highlight of Kyle Mayers’ career, before his heroic Test double century came about, were his two first-class hundreds.

In similar vein, the biggest highlight of West Indies Cricket in the recent times, before standing up to Bangladesh’s tall ask of 395, was their win against England at the Rose Bowl in 2020.

An uncanny similarity, however, accompanied both instances- one of which appeared as a precursor to Kyle Mayers’ Test debut and the other, a chain of events that followed West Indies’ inspiring performance in England in the pandemic-marred year.

Kyle Mayers, it shouldn’t be forgotten, entered his maiden Test (Chattogram) at the back of witnessing a 3-0 drubbing of his team in the ODI leg of the tour, wherein he could manage scores of 40, 0, and 11.

Likewise, the West Indies, after their incredible win in the first test against England found themselves horribly outdone in both games that followed.

But if there was something amiss in both instances then it was pretty much the very thing that enabled a battered and bruised team to bounce back in conditions absolutely alien to those found in the Caribbean.

That great quality that forms the desire to do better, to lead by an example, and if you are Kyle Rico Mayers, then the quality that makes debutants stand in a league of their own.

The West Indies were found licking their wounds, the team’s woes in putting bat to ball amplified by a failure to put even 200 on the board.

But the same West Indies that appeared run-less, soulless even, did more than put up a brave fight to Bangladesh in the Test; it registered the highest successful run-chase in the sub-continent.

Let that sink in and make space for accommodating a team often subjected to cantankerous adjectives.

You can do a merry-go-round of the big names- Lara to Kallis, Ponting to Anwar, De Villiers to McCullum.

Yet none achieved what this star-less West Indian team, amply identified as a ‘second-rate’ unit, did at Bangladesh.

Would any of that have been possible without intent?

What mustn’t be forgotten that the West Indies that eclipsed the same dominant hosts this time around had endured, back on their 2018 tour, horrible results in both Tests, which included an innings defeat.

The last time around, they had Hope, Chase, and Hetmyer.

This time, however, there were none of them.

But what boarded the plane from the Caribbean onto a journey over 9,100 miles afar wasn’t just inexperience of the unit; there was pure intent accompanying a young unit that set out to do what millions of fans across the world deemed miraculous.

But miracles happen in a faraway land where angels swim in golden lakes, not on the cricket field.

What defined a West Indian team, with an average age of 28 and an average Test-match experience of just 21.9 games (241 Tests including the eleven) was self-belief.

And often it’s what we feel about ourselves despite knowing the world doesn’t reserve a great deal for us that makes all that difference.

That there was honesty in the application of plans and in the conduct of the team was too big a currency to overrule, and interestingly speaking, a rare commodity on display knowing the familiar fidgety ways of the Caribbean cricket.

How often does one see a team with the familiar figureheads in red-ball cricket in a Holder, Chase, Hope, Hetmyer, Dowrich stay on the wicket for 127 overs?

How often does one see the West Indies hold onto a draw on the final day?

A little over six months ago, a team with all A-listers who chose to distance themselves from the ongoing series struggled to hold out to a draw on the fifth and final day at Old Trafford.

This was when the entirety of the previous day’s play had been rained out. The West Indies had eight wickets in hand then with the quartet of Holder, Chase, Dowrich, and Blackwood in the dugout with Hope at the crease.

A few hours back, the West Indies, three down already in pursuit of 285 on the final day, had Blackwood in the dugout with Mayers and Bonner as the only hopes at the crease.

Over a year ago, the West Indians failed to post even a 250 in any of their Test outings against India, despite playing in home conditions.

In more ways than one, the Kraigg Brathwaite-led team stood up for everything one may not have come to expect of a team that lacked any prominent star or match-winner.

The Kyle Mayers-Nkrumah Bonner pair faced a whopping 442 of the 762 deliveries, i.e., the 127 overs a tired, dejected Bangladeshi unit bowled in the fourth inning.

The two debutants stitching a 216-run stand, a world record for the West Indies, had about as good an idea batting on turning sub-continental wickets as does Shannon Gabriel about hitting double centuries in international cricket.

Moreover, how often has one come to see Kraigg Braithwaite hit a fifty at a strike rate touching seventy?

While the tale of guts and glory must belong to Kyle Mayers, one must also spare a thought to appreciate that it was Brathwaite’s 111-ball-76 that formed the curtain-raiser to the great West Indian fightback.

The stepping down the ground to Mehidy and the exploring of vacant gaps onto the covers and point region showed there was a craftiness to Kraigg Brathwaite the leader, not just the dogmatic “I’ll-defend-until-the-final-ball-is-bowled” approach.

That being said, one must also remember that the familiar tale of the underdog’s triumph against all odds isn’t some urban legend.

It is very much a thing mired in reality for as long as one is prepared to fight and grind it out, as did Kyle Mayers and Nukrumah Bonner.

That no-one gave their West Indies team a chance on Day 5 was amply clear with Twitter experts and trollers making loud calls on Day Four.

But that Mayers and Bonner batted as if their lives depended on it ultimately paved way for a triumph none foresaw coming. For four prominent sides- India vs England and South Africa vs Pakistan- were playing on the very day an under-staffed West Indian side made it count.

And remember they did so- minus any big names but with plenty of intent. 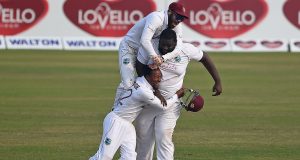