In the annals of Indian Cricket, the events that unfolded at the Chepauk recently shall not be forgotten. But the sheer margin of India’s win-317 runs, which happens to be the biggest defeat ever imposed on an opponent Asia in terms of runs – wasn’t the only factor that made the second match of the series unforgettable.

It’s the fight and character showed by a promising side, one that entered the game at the back of a humiliating defeat in the series-opener, that makes the Chennai Test so unforgettable. In this magnificent win that not only helped India to level the series 1-1 but also led the team to move up to second on the ICC World Championship points table, one big hand stood out.

And it’s that of Chennai’s super king, Ravichandran Ashwin. At the conclusion of the contest, he became the player-of-the-match for those heroics with both bat and ball but implicit in the famous off-spinner’s success was his appetite to strive for greatness.

Remember, this was a name that had gone missing in India’s Test unit a few months back and in the end, it became the name that whistled on everyone’s lips.

If ever there was an occasion of the true ‘whistle podu’ outside of the IPL then this was it. Never forget February 16, 2021.

The grit and the capacity to endure a bowling-heavy England weren’t the only reasons that made Ravichandran Ashwin a stand out hero in the recent contest, a match where he fired perhaps his most famous Test ton. It was the fact that in a contest where even the big guns failed to produce the goods with the bat, one of India’s famous sons, known for the loop and guile in his off spin fired a punchy hundred.

Ashwin was asked about the pitch condition to bat at the end of day 2 where England batsmen only managed to score 134 runs in the first innings. Ashwin came up with a witty reply, “it is just another form of art” and he did exactly the same in the second innings while batting, smashed a battling hundred in front of the home crowd after taking a five-for in the first innings.

The Indian all-rounder took the help of fourteen fours and one six to complete his fifth test ton, 106 off 148 balls. This was the third time for Ashwin to get a hundred and a five-wicket haul in the same test match, Ian Botham achieved the same feat five times in 102 test matches. Interestingly, his all previous hundreds were against the West Indies, two away and two at home.

Situations were not in favor of the Indian all-rounder when he came to bat as the top 6 batsmen were already having tea in the pavilion and only the Indian skipper was battling hard on the spinning track.

Chennai boy’s super knock and his partnership of 96 runs with Indian men’s cricket team captain Virat Kolhi assisted the Indian team to put a massive second innings lead and get opposition completely out of the game.

The 34-year-old was giving the same treatment to the fast bowlers too, played tennis-ball like shot when Olly Stone tried a shot ball as a weapon to stop the Indian all-rounder from hitting boundaries all over the park. Also when England’s all-time second highest wicket-taker, Stuart Broad pitched one ball up, Ashwin magnificently smashed the ball over mid-on for four.

Indian fans were on their feet when local boy smashed a mis-hit over the slip cordon for four and completed his fifth ton.

Why was this innings so special for Ravichandran Ashwin and for the Indian cricket team?

There was a lot of buzz about the pitch conditions at the Chepauk but Ravichandran Ashwin showed the mirror to the critics, he taught everyone that how to get wickets and how to score the runs on the same pitch where England batsmen couldn’t even manage to score runs equal to India’s first innings total in their both innings.

Like his spin variations, he showed solid character to the cricketing world, whether his bowling skills, his ability to defend the ball the whole day, or smashing quick runs in a situation where even senior top-order batsmen failed to do so.

In the absence of India’s one of the best all-rounders, Ravindra Jadeja, there was a heavy burden on Ravichandran Ashwin’s shoulders to fill that gap but his class showing at the Chepauk kept the spirit high and lifted the junior players’ morale high which led the debutant Axar Patel to get a five-for in the second innings of the match.

Ashwin proved his worth in overseas conditions as well in the last series against Australia in Australia after witnessing a humiliating loss in the first test of the four-match test series. He turned the tables in the Third test at the SCG along with Hanuma Vihari, both of whom fought hard for 256 deliveries where conditions were not in their favor.

Lest it is forgotten, the Indian cricket is very lucky to have a bowling all-rounder like Ravichandran Ashwin and his stellar performances in the second innings have made his team a firm favorite to not just take control of the series but soar further in the ICC world test championship.

But one mustn’t make the mistake of undermining a Root, Anderson, Stokes-powered side to come back strong at what lies ahead: the ‘Pink-ball Test’ starting from 24 Feb at Sardar Patel Stadium, Ahmedabad. 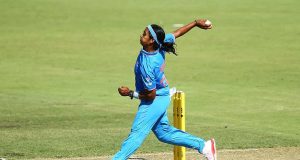 Shikha Pandey : The Proud Wearer Of The Blue Bandana Turns...