True to the Dark Horses adage that they carry, New Zealand are a side with a penchant for unveiling something incredible at the highest annals of the game. A few summers ago, they birthed the baseball-style hitter of the white ball in Colin Munro, regarded widely to this day for scoring three T20I hundreds. Then, in the summer prior to the last year arrived Kyle Jamieson, and the impact casued by the giant in the IPL auctions is just proof of his all-round potential. Now, it appears, we are staring at a new sensation altogether that recently burst onto the scene.

This Kane Williamson-led side, that’s already qualified for the World Test Championship final (due for June (18-22 at Lord’s cricket ground), has its sights on a new target. They are striving to create a perfect team balance for the ICC WT20 2021 to be contested in Australia. And to do so, they couldn’t earn any better practice than overcoming the ‘big lads’ Australia in the ongoing five-match T20I bilateral and the stepping stone to that direction was the first game.

The hosts fired the opening salvo in the series-opener, winning at the Hagely Oval by a margin of 53 runs. A normal win by ODI standards but a huge margin of victory since this was a proper T20 international. But the bright highlight of the win was underlined by someone sitting miles away in the sub-continent.

Ravichandran Ashwin, in showing his humorous side after the rocking innings by Devon Conway- an unbeaten 99 off just 59 deliveries, including three huge sixes and ten fours- tweeted: by tweeting “Devon Conway is just 4 days late, but what a knock!”

Devon Conway set a base price at Rs. 50 lakh for the IPL 2021 auction, yet no franchise showed interest in the New Zealand batsman. But just what happened four days later? His bat did all the talking soon after the IPL 2021 auction day. In doing so, he set early precedent to the fireworks one’s grown accustomed of seeing mega hitters unleash in a competition savoured by millions world-over. Who knows that passport to cash-rich leagues around the world could soon follow.

Australians on their part, however, were first-hand witnesses to the carnage.

Australia won the toss and decided to bowl,  and the opening bowling duo of Daniel Sams and Jhye Richardson sent Guptill 0(3) and Siefert 1(5) packing early.

Captain Williamson got a good start but Daniel Sams gave a jitter to the Kiwis before finishing the powerplay; he dismissed the skipper.

And thus came the mayhem-maker Devon Conway, the batsman with a big-match potential, the man who could well be on his way to being the next big thing in New Zealand cricket.

Conway came to the crease to bat along with Glenn Philips. Both held their nerves and made a decent partnership of 74 runs to put New Zealand innings back on track. Stoinis dismissed Philips in the thirteenth over and broke the important partnership, but Devon Conway continued with his magical form until the end, helping his team to a massive total.

Hitting the gaps as if he’d programmed his opponents to place a field to his liking, he was dismissive of anything short bowled to him and equally attacking off the blackfoot.

In reply, New Zealand bowlers collapsed the Australian batting top order, restricting them to 19/4 in just the fifth over of the second innings. New Zealand bowlers, didn’t allow the visitor batsmen to open their arms much after a horrible start of their innings, ended Australian innings at 131-10 in 17.3 overs.

Ish Sodhi bowled a brilliant economical spell of 4/28 in 4 overs but Devon Conway got the player-of-match award for his battling knock under pressure.

How did Devon Conway make his way to be a part of the New Zealand T20I squad?

The South African-born Devon Conway came to New Zealand in 2017. He perspired enough at the domestic level for South Africa, played 100 First-class games and 70 List A games.

The 29-year-old left-handed batsman started his new journey at University Club and also represented Wellington Firebirds in Super Smash league in New Zealand. He worked hard to get noticed by New Zealand cricket team selectors but Tom Blundell’s national call-up made him wait for a long time to represent New Zealand.

After years of hard work and dedication towards the game, New Zealand wicket-keeper batsman made his international debut in a T20I match against the two-time world champion West Indies cricket team on 27 Nov 2020 at Eden Park, Auckland. He left no unturned in making his T20I debut grand, Conway smashed 41 off just 29 deliveries, including five fours and one massive hit over the ropes while chasing a mammoth 179 in just 15.2 overs. He couldn’t finish the game for Kiwis but his team won by 5 wickets.

Before five matches T20I series against Australia, Devon Conway had blasted four consecutive fifties for Wellington in the Super Smash league and his special innings of 93* off just 63 balls against Canterbury in the final led Wellington to win the championship title.

The left-hander possesses all the shots mentioned in the book and has ability to finish games for his team like Hardik Pandya, Andre Russel, do for their respective teams in white-ball formats.

Think of it for a second. He’s part of a team that features mega T20 stars. Think giants of the game in Taylor and Williamson. Think Munro and the Corey Anderson in the past. Yet none have in their grasp what Devon Conway so ecstatically hols: the record of scoring five consecutive 50-plus T20 scores.

They say good things come to those who wait. And it seems the wait for the next smasher in white-ball cricket has ended in Devon Conway. The only question is- can Conway go from strength to strength? 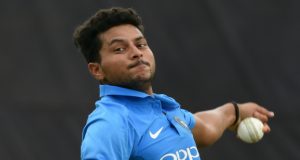 The Time Has Come For The Clever, Mr. Foxy Kuldeep Yadav

Bhavesh Bhimani - July 14, 2018
0
Ever since Kuldeep Yadav has set foot in the UK he has been on fire. These are his match figures in each of the...