The last anyone saw Chris Gayle in the West Indian colors was back in the 2019 World Cup. Though, the year yielded big returns for the lanky Jamaican who notched up 753 ODI runs from fifteen outings, including two centuries and five fifties, he didn’t exactly put on a show in the mother of all cricketing battles.

What one remembers apart from a couple of fluent outings, including one against New Zealand (87 off 84), are largely forgettable scores in a series where the West Indies were found wanting.

This includes that modest thirty-five off forty-eight deliveries against the very opponent he’s now set to bat against, albeit in a format where his performances have produced momentous returns.

However, there’s more to Chris Gayle’s return for the T20Is against Sri Lanka than what one would’ve noticed.

In the past half a decade, where the West Indies and Sri Lanka battled in two bi-lateral series’, Chris Gayle missed out on four separate T20 internationals.

He’d have certainly rued missing out on featuring in the outfit that smashed the Sri Lankans to win 2-0 as recently as March 2020.

Where Andre Russell’s muscular hits, Fabian Allen’s power hitting and Kieran Pollard’s domineering leadership powered the Windies over the hosts, Gayle’s towering presence up top would have made the two-match series even more dazzling.

But during this period of absence from a format where he’s hammered not one but two centuries, apart from gathering thirteen fifties, a lot changed in the very unit where Gayle’s return is now set to run packed stadiums.

Evin Lewis became a key feature of the top order in T20s.

The side experimented with multiple opening choices, often resorting with Andre Fletcher, the Spiceman.

The in-and-out, often successful, marginally disappointing Lendl Simmons stroked runs here and there. The side oversaw a change in white-ball leadership, Holder making way for Pollard. Moreover, Dwayne Bravo even made a comeback, putting the 2018- retirement behind him.

Now as Christopher Henry Gayle returns to the T20 fold, nearly 730 days after he was last spotted in a T20 international for the West Indies, all eyes are fixated on that bat meeting which the white-ball has often seemed like a cotton ball being diced over to a lion intending to trouble the beast.

On his part, Chris Gayle himself has seemed pumped about the return, wasting no time whatsoever in announcing his true intentions for West Indies’ favored format, “A series win would be good, but I’d like to get three T20 titles under the belt.”

Understandably so, fans worldover, are overjoyed by the prospect of seeing the man whose bat produced the first-ever T20 hundred in a world cup, over a decade and a half ago, return with a clear mindset.

In nearly fifteen years of playing breathtaking cricket in the game’ briefest format, Gayle’s produced records that have made T20 the go-to destination for the new age fan devoted to dating apps, memes, one who has zero tolerance for boredom but all the time in the world for consuming entertainment.

Truth be told, it’s a record that inspires envy.

Moreover, running closer to 1,700 T20 international runs, Chris Gayle has scored the most runs for any West Indian cricketer and has thudded the most sixes by any man donning the maroon colors: 105.

Yet, there’s something majorly wrong in those eye-popping credentials that have made Gayle quite the household name.

Ever wondered about Chris Gayle’s T20 record vs Sri Lanka?

For someone who’s fired over 300 of his 1600 plus T20 runs each against Australia and South Africa, apart from pillaging England for well over 400 career runs, Gayle’s numbers against the island nation point to epic disappointment.

He’s yet to touch even eighty odd runs against an opposition that has thus far, managed to curtail the Gaylestorm, the very factor the world appreciates endlessly about the carefree Calypso striker.

Forget the absence of a hundred, that Gayle’s only managed a solitary fifty from six attempts against Sri Lanka truly paints the prospect of seeing the big man return again with endless wonderment.

It all points to – the ‘what-might’, whether he’d be able to handle spin, such a weakness as previously exposed by the Islanders in both the 2012 as well as the 2014 (T20) world cups that shall spice up things in what lies ahead.

Therefore, even bigger than the prospect of seeing the high-flying sixes that’ll hopefully be spotted at Antigua’s Coolidge Cricket ground, is the question whether the left-hander would be able to stay long at the crease in the first place.

And that Gayle won’t have the luxury of time for the pendulum swings ever so fast and often cruelly in the T20s marks the return of a true giant of the game with the real thrill in what lies ahead for the West Indies.

By the way, did anyone know each of his last four outings against Sri Lanka produced single-digit scores (5 off 4 being the highest)? 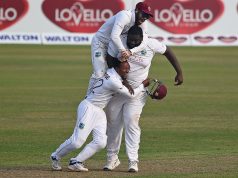 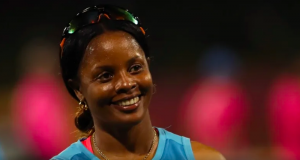 A Dedication To The Smile Of West Indies Women’s Cricket: Merissa...

Dev Tyagi - December 15, 2020
0
A smile is what is often needed, In a world where complicatedness can take over simplicity It’s something that often happens in the great game of...