Zimbabwe, a country marred by political injustice, famine galore, plummeting unemployment complemented with inflation that only soars found a great bully in the recent times, as did the rest of the world. The lockdown just made the situation worse.

Well, with such atrocities that an average Zimbabwean faces every day, there is little to no joy in his or her life.

So, a key question beckons: what do they have to look forward to?

Well, world cricket found an able answer albeit one that came to life thousands of miles away in Abu Dhabi.

Yes, a rare test victory and that too with a young side devoid of experienced campaigners, the likes of Brendan Taylor, Craig Ervine, Kyle Jarvis, Tendai Chatara, Chamu Chibhabha and PJ Moor who were all absent either through illness or injury.

The Sean Williams-led side, not only beat Afghanistan in the first test but totally annihilated them inside just two days, soaring to a 10-wicket win.

This in subcontinental conditions that the Afghans would be more accustomed to.

A test match which has no bearings on the ICC World Test Championship as compared to one that only just started between India and England amid everything to play for to get into the final of this prestigious competition.

Well, such is the divide between the bigger and the lesser teams.

Anyway, getting our attention back to the game at hand, Asghar Afghan, the captain of Afghanistan won the toss and decided to bat and in a matter of moments, his team were faltering at 39 for 3 and eventually dismissed for a paltry 131.

Blessing Muzarabani, the lanky seamer again showed why he is touted as the next big thing in Zimbabwean Cricket with his four-wicket halt complemented by debutant, Victor Nyauchi and Donald Tiripano with three wickets each.

The Chevrons in reply were facing demons of their own in being four down for just 38 runs before Sean Williams played a true captain’s innings in scoring 105 and was ably supported by the experienced all-rounder, Sikandar Raza who scored 43 and keeper Regis Chakabva in his knock of 44.

As a result, the southern African nation mounted a formidable 250 with a first innings lead of 119.

In their second innings, the subcontinent side again slipped with being five down for just 21 as the duo of Muzurabani and Nayuchi were at their destructive best.

Afghanistan could never recover from this debacle and were once again skittled out for a meager 135, with Zimbabwe left to score all of 17 to win the match.

The Chevrons reached the target in a jiffy.

Post the game an elated skipper, Sean Williams, who was also adjudged the player of the game said:

“To win a Test match in two days with a young side is an extremely big feat for us as a team. And for me it’s huge. As I have got older and taken on more responsibility as captain and a senior player, I started to understand more about my own game and leadership skills, and how important my performance is through tough times. As a leader, you can’t show weakness, you need to be strong. That’s a big thing for me. I’ve had it tough, I’ve had it rough and I’ve just kept on pushing. I feel like I didn’t come this far, to just go this far. For the future this win is huge, it’s important that we stay humble. There is still another Test to go”

Cheers to you captain and much lauds to your team and moreover a rare occasion to celebrate for millions of Zimbabweans’ back home.

An occasion to immerse in joy and forget their misery. One can just wish, such occasions should come about more frequently.

When the lesser teams win, it’s a win for the entire development of the game.

One can only hope it continues! 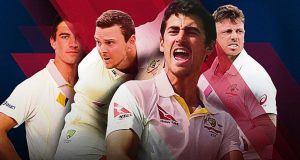 Why the Australian bowling attack holds the key for 2019 World...

Abhishek Vedpathak - August 24, 2018
1
Australia - Down Under, literally. The 1992 Benson & Hedges World Cup was a landmark spectacle. The use of the white ball, players with coloured...