Martin Luther King once said, ‘I have a dream that my four little children will one day live in a nation where they will not be judged by the color of their skin, but by the content of their character.’

So relevant are his words in today’s times where everyone is engulfed in petty race battles, not realising we are all first human beings irrespective of our race and backgrounds and should therefore only be judged on the content of our characters, not on the colour of our skin.

Well, it’s a blessing to be colour blind, if you know what I mean.

Anyway, turning our focus on cricket, one such person who epitomises strong character is the English fast bowling sensation Jofra Chioke Archer.

Born in Bridgetown, Barbados to an English father and a Barbadian mother, Jofra since his youth days had an undying passion for this beautiful game.

He represented the West Indies U19 side in 2014, before moving to England to further his career in 2015.

Just into his maiden county stint in England, Archer took his first domestic fifer for Sussex, with figures of 7 for 67 in a game against Kent.

His raw pace matched with lethal bounce was worthy of every praise which soon got him a Big Bash contract representing the Hobart Hurricanes in the 2017-18 season.

Well how could the biggest club tournament in world cricket not notice him and in the 2018 IPL season, this Barbadian found himself in the Rajasthan Royals side for a whopping £800,000.

He made his IPL debut against Mumbai Indians taking three wickets in the game to be adjudged man of the match.

From his debut to date, with 46 wickets from 35 matches this man has certainly soared in the money-spinning Indian tournament.

Unfortunately, injuries have marred his nascent career and he seems to be all but out of the upcoming IPL, at least for the initial phase owing to a finger injury he sustained prior to the recent Indian tour.

A decision would be made later this week on his availability in the premier Indian tournament as he was withdrawn from the Indian tour after the T20 leg owing to precautionary reasons.

Coming to his international exploits, it wasn’t long before the English Cricket Board took notice of this warrior and fast tracked him to play for England, when he made his ODI debut in May 2019 against Ireland and a T20 debut against Pakistan, the same month.

Initially out of the 2019 World Cup preliminary squad, ex all-rounder, the mighty Andrew Flintoff said he would drop “anyone”from the squad to include Jofra Archer.

Well, such was the belief the famed ex-cricketer had in the ability of this intrepid seamer.

He bowled the Super Over against New Zealand after the first 100 overs were tied and the super over too, albeit England went on to win the cup owing to more boundaries hit in the game.

Finishing on a tally of 20 wickets, the third highest in the tournament, the ICC included Archer in their team of the tournament.

As one would know there are two things which mean more to an English cricketer than life itself, the World Cup and the Ashes.

Jofra Archer had won one and now it was time to challenge for the other later in the year.

Having to miss out on the first Ashes test owing to an injury, Archer made his debut in the second test at the spiritual home of cricket, Lords.

He took five wickets in the test, with his first scalp being the Australian opener Cameron Bancroft.

Though the test was drawn, Archer’s aggressive bowling with those unplayable bouncers constantly kept the Baggy Greens on their toes.

One to stamp his authority on the fiercest rivalry in cricket, Archer’s 6 for 45 in the first innings of the third test at Headingly was a masterclass, giving him his first test fifer and England went onto square the series, also thanks to massive batting effort by Ben Stokes in the fourth innings

The Ashes were finally drawn at two apiece, with Jofra finished his tally on 22 for the tournament, the third highest on the wicket list.

A successful World Cup and Ashes display earned the young Barbadian a national ECB contract and a much-celebrated mention in the Wisden Cricketers of the Year for 2019.

Amid a 2020 of more off-field drama thanks to the pandemic, Jofra continued his fine form in the just the two series that England played against the West Indies and Pakistan, adding a further eight wickets to his test tally.

This after he picked six more in the English demolition of South Africa in the 2019-20 tour.

He advanced his test credentials with four more in the two tests he played against India in the recent subcontinent tour, taking his total tally to 42 test wickets in just 13 test matches.

Add to this, his 44 wickets in the shorter formats, Jofra Archer in his young career has become a huge asset for England and if looked after properly, should attain great feats, the likes his older compatriots James Anderson and Stuart Broad would be proud of.

The Barbadian, with unparalleled tenacity in bowling and a heart as mighty as the ocean, one can safely say, he is surely England’s gain and a loss for the Windies.

We wish this man with a heart of gold and much liking for it too, a happy 26th. 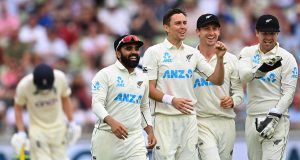 Abhishek Srivastava - June 14, 2021
0
We have talked enough of how a country of 4.6 million have always punched above their weight in sports. But New Zealand, for long...