10 years is long enough time to forget a particular feeling or to overcome an emotion, unless of course it’s the feeling of watching India winning the World Cup. As an avid cricket lover, to watch India lift the World Cup on the unforgettable night of 2nd April 2011 was nothing short of surreal, a feeling so fresh as if it happened just yesterday..

But truth be told, even today, i.e., ten years after witnessing India go the long mile, the feeling hasn’t changed, nor has the emotion subsided. As a matter of fact, it has only blossomed over a period of time.

Even as a decade has passed since India became the world champions, thinking about the 2011 World Cup even today produces countless memories that run through the mind, feelings that made that tournament unforgettable. I think of Ireland beating England at Bengaluru in a sensational run chase, I reminisce Sachin Tendulkar’s hundreds against England and South Africa, that thriller between England and South Africa on a slow Chennai surface. And yet there’s more: Yuvraj Singh’s mercurial knock against Australia at Ahmedabad, and India beating Pakistan at Mohali in that all-important semifinal. But there’s a special feeling to the eve of watching India in a World Cup final were different.

This emotional expression is an account of not just a part-time Cricket writer or the fan of the sport but importantly of an individual who like most others on that very unforgettable day of supreme achievement felt that it were he who won as his favorite team won the mother of all cricketing battles and that too, in the beating heart of India, Mumbai.

2nd April 2011 was a close friend’s birthday. To ease my anxiety, I went to his house early in the morning, had a few laughs over a customary cake cutting. Also, him being a avid cricket follower meant that we discussed cricket at length. After all, it was no easy day; it was to be a day where true judgment would be passed on who’d emerge the supreme winner at the end of ten hard-fought, mind-bending hours at the highest stage of contest in ODI cricket.

Truly speaking, the excitement and anxiousness of watching India in a World Cup final in just a few hours of time was too much to cope with.

I remember coming back home from my friend’s, dressed up, and leaving for work. But here’s the fun part: that day my workstation was anything but ‘WORK’ station. We had this big LED setup at my outlet in the heart of Delhi’s Malviya Nagar to watch the famed match, a contest for the biggest prize in this great game of cricket.

Finally, the clock turned 1:30 pm and this meant only one thing – ‘Toss Time.’

As if there wasn’t enough tension in the air, Kumar Sangakkara, Sri Lanka’s captain decided not to pay attention to the toss. And we had two tosses . Simply unheard of – what drama!

Sri Lanka made a slow start but an assured one. Mahela Jayawardene came up with a gem of an innings. Never mind personal affiliations, you had to applaud his knock given the World Cup final’s stage and over 40,000 people cheering the opposition. Sri Lanka notched up 274 for 6.

My mind said, it looked like enough but heart completely opposed it.

I distinctly remember that right before India’s innings was to start, I rushed back home so that I could watch it with my folks.

How much business happened that day just didn’t matter. All that topped the mind was India. Everything else was business for some other day.

Sachin playing his last World Cup, can he win India the Cup? All I thought about just as some hundreds of thousands of concerned fans was this.

This truly had been his cherished dream. And ditto for us fans. But there was more my mind was stuffed with- can he come up with his 99th international hundred this very occasion?

What a moment will that truly be, no? All these thoughts paraded my mind as I sat down in front of the television for the start of Indian innings.

Let’s not forget the pleasure of consuming cricket back then- and it’s been a decade- were simpler.

No crazy obsession with smartphones. No apps. Hardly did anyone tweet.

Your celebration was organic and frank. Back in those days you didn’t dance to celebrate on a zoom call. Every wicket that fell or every boundary hit was celebrated jointly as if an entire neighborhood had run riot.

But then came the nightmare of every Indian.

Sachin fell early along with Sehwag, and with India on 31 for 2, needing 275 runs to win, it seemed a win as perhaps as distant as is the walk to Lord’s from New Delhi.

Recollecting Sanga collecting a routine catch off Malinga, the Indian in me was shattered, almost heartbroken.

Looking back now, I probably underestimated the capability of other players to win it for India from that position. But hey, perhaps so did many of us engrossed with Sachin and his short stay. But that day at the Wankhede, a an inning of true genius was born.

Gautam Gambhir with his most uncelebrated knock in international cricket, resurrected Indian fortunes along with another up and coming name: Virat Kohli. The right-hander surpassed his age and showed maturity, which reflects in his world dominating status today.

Together, they set the stage for the captain marvel, a man who still think could have carried on for a year or two perhaps.

Yes, MS Dhoni did surprise everyone walking to bat ahead of Yuvraj Singh, especially considering Yuvi was in prime form. It was a brave call under immense pressure of a World Cup final.

But phrases like ‘pressure’ are for mortals; Dhoni is made from different sands.

He started slowly, prodding at most deliveries. Suddenly, out of the blue he smacked Muralitharan for a boundary. That was an extraordinary shot, a shot that gave me a belief that he’s going to win it for India.

An hour or so later, the sound decibels at the Wankhede and at my household had built up to unprecedented levels.

Gambhir missed what would have been a splendid hundred, but Dhoni and Yuvraj carried India to the doorstep of victory. One hit away, with Kulasekara bowling, the incredible was perhaps just seconds away from the countless in India who had dreamt of the majestic.

And then came the finality, Dhoni smacking the right-armer over long on for a six.

And that was it, the dream of mine as also of a billion-plus Indians came to life. The euphoria, the adrenaline of that moment was something I can never forget.

There were high fives, hugs and what not at my household. No marriage. No ceremony. Not a party, but our hearts together that incredible evening.

Frankly, I’m still getting goose bumps writing this, you can imagine what It would have been like.

As a fan who’s stuck by this team we perhaps can’t picture cricket without, it was the moment I had waited for all my life since I started loving cricket.

Indian players on the field could not hold back their tears, and here we couldn’t hold back ours.

I called up my friend. This was the best birthday gift anybody could have given him. We cried. It was that kind of night, a night when dreams turned into the big reality.

Joined by my friend, a few minutes later, we danced the night away. Surely our dance steps weren’t perfect but how did that matter?

It was time to party, no booze or music needed though. We were high, India-high, high on a World Cup win.

Strangers hugged and jumped in joy. Back at India Gate, it was a festival of togetherness. Mad scenes.

Had something like TikTok or insta videos existed back then, everyone would’ve been at million-plus hits.

Countless followers on Twitter on uploading just a single snap, that kind of stuff.

It didn’t matter where we came from and where we’d go next. It was that sort of night.

But then not everything needs to be captured on film or on the tiny habit we’ve cultivated- the smartphone.

There are somethings that ought to be captured by the sheer majesty of our eyes.

It’s there that they stay in permanence.

Like that win for India: it’ll stay on, always, forever. 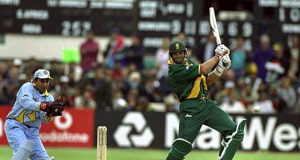 Flashback May 15, 1999 World Cup: When A Jacques Kallis Masterclass...

Dev Tyagi - May 15, 2021
0
Way before he came to be known as "King Kallis," a moniker that befits a modern legend of our times, Jacques Kallis found himself...