What’s a great contest of cricket in the absence of records and achievements? Everyone likes a game with big wins, huge runs and exciting dismissals. But the game serves yet more fun through feats that hold everyone’s attention for sheer awe and thrill.

And where it comes to the women’s game, there are few that paint the narrative of the sport with such consistent colors of dominance and achievement as Australia, aka the Southern Stars.

At the moment the focus has shifted to the three-match ODI series where the Southern Stars shall be challenging the authority of a contemporary known for playing a very exciting brand of cricket: the White Ferns.

However, this is no ordinary occasion; the Southern Stars are on the verge of making a world record. Theirs is a juggernaut of outstanding achievement that’s been laced with rollicking wins, wins and yet more wins for over two successive years.

Way back in March 2018, Australia defeated India by eight wickets in Baroda and since then they have not lost an ODI, which makes them stand at 21 wins – a feat that equals former Australia captain Ricky Ponting’s 2003 side.

If the Southern Stars can manage another win, they will be the first team to achieve 22 consecutive wins- a feat touched by no team ever in the checkered history of the game.

Australia last faced a defeat in the 50-over format way back in 2017.

Just reflect on this for a moment. The team last lost an ODI over three years back in time. Since then, they have won seven series against six opponents and in five countries.

But is consistent and dominant winning the only reason why the Southern Stars are enjoying everyone’s admiration?

As a matter of fact, twelve in twenty-one (12 of 21) of their wins have come on foreign soil. For the better part of last half a decade, they’ve played at the subcontinent to the unfamiliar conditions of Malaysia, they’ve contested in the United Kingdom and even in the Caribbean.

The Meg Lanning-led Southern Stars started their winning streak against India in Baroda. Following that Lanning’s ladies took on Pakistan on a neutral venue- Malaysia, before maintaining their winning run on home soil, against the White Ferns. Although, there was a scare of losing the game in Perth at the start of 2019, they managed to win by just five runs.

Later, in the Ashes, another three nil (3-0) sweep helped them win the coveted trophy, an act which was followed by another successful Caribbean tour where Lanning, Alyssa Healy and Ellyse Perry’s centuries sealed the deal.

Last year, Australia registered a dominant series sweep over Sri Lanka before the global pandemic novel COVID-19 brought the entire world to a standstill. Because of the pandemic, their series against South Africa in March last year got cancelled and they were forced to wait for the Trans-Tasman contest to continue their winning streak which they successfully maintained.

Should that contest have happened, we would probably have seen the Southern Stars embrace the magnanimous record already by then- who knows!

While a lot of new faces have come in, a few have lost the place as well. But the core team remains the same. Surprisingly, only four players have featured in all twenty-one (21) games in this famous unstoppable juggernaut that’s inching ever so closer toward glory – Alyssa Healy, Rachael Haynes, Ashleigh Gardner, and Beth Mooney.

Lanning, Megan Schutt, Jess Jonassen, Ellyse Perry and Georgia Wareham have played nineteen games. Apart from them, only Nicola Carey has played more than ten (10) games in this time period, her overall appearances stationed on 15.

Big-hitting Alyssa Healy is the highest run-getter (1132 at 56.60), such a key figure in Australian domination while Jess Jonassen happens to be the leading wicket-taker (39 at 12.64). Meanwhile, Ellyse Perry boasts of an enviable batting average of 60.90 along with a bowling average of 18.80. The kind of all-round force any side would love to have for every single contest.

Performances from the very top draw in different departments of the game, right?

Moreover, the Southern Stars have cemented their time at the wicket holding the bat in the hand during such time; they lost only 117 wickets in twenty-one matches during this period.

As far as the bowling department is concerned, Australian bowlers picked up nearly 200 wickets in this time period, conceding over 3600 runs in twenty-one (21) ODIs. So dominant have the Aussies been with the white-ball that their opposition could only manage a total of over 250 once whereas on only eight occasions could they restrict the opponents below 200.

“How we mark ourselves being able to consistently win in different conditions is something we rate really highly,” head coach Matthew Mott said. “The key to that consistency is the players themselves getting better and better. We’ve got number of players in the ICC rankings in the top ten, that’s something we’ve focused on, that they’re getting better every year.”

Apart from that, they’ve tasted a fair share of success in run chases. Since 2014, they have chased down the target in 30 matches and lost only 4 matches as well. While Ricky Ponting’s record included World Cup wins twice in 2003 and 2007, Meg Lanning is yet to win an ODI World Cup.

However, Ponting gave a great piece of advice in a recent chat to cricket.com.au, where he said “Just get out there and play and do what they’ve been doing for so long. Because it’s obvious what they’ve been doing is working and working to a really high level. I don’t think they need to hear anything from me, because they are a champion team with lots of champion players. I’m sure they’ll get the job done when they get the chance.”

While it is evident that Southern Stars will try to register the world record in the first ODI against New Zealand, they are going to put up with a tough fight for sure. As Lea Tahuhu said, “It’s always nice to mess up the Aussies’ plans and that’s what we’ll be looking to do.”

Though regardless of what happens in the next few hours, it can be said in no uncertain terms that what the Australian side has accomplished is nothing shy of taking the women’s game to a new summit, one which every team around would love to scale some day albeit one that would also seem a daunting climb. 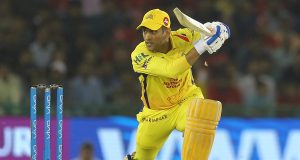 MS Dhoni- Riding Into The Sunset With Head And Bat Held...

Bhavesh Bhimani - May 19, 2018
0
It has been fascinating watching Mahendra Singh Dhoni bat for the Chennai Super Kings (CSK) in this season of the Indian Premier League (IPL). It...