The Proteas emerging women’s team are in Bangladesh starting April for an unofficial one-day-international series. The central idea of the contests is to groom a key set of youngsters and test the experienced campaigners from the domestic circuit in order to prepare (and train) them for international matches.

This also possesses a route for the players from both teams to train for the upcoming world cup exploits. For the Proteas, the experienced players who have not been playing in the national team for a long time have this opportunity to get a call-back into the squad. Many players who have a great run in the domestic circuit have not made the cut for years into the international arena, but this is an open chance to exhibit their talent and prove their worth.

The world cup, due to be held in this post-COVID era has its own challenges, specifically the number of squad members. Having a limited number of players in the team has led to more difficulties because facing injuries, it’s substitutes who’ve made the teams more wanting for extra players, if needed.

Thus, a key priority for the upcoming World Cup will be to fully test the potential of the bench strength. This is because when stuck in the bio-bubble, players can’t attach new members if needed immediately. Therefore, peer replacement could prove to be quite an ask later in the tournament. Hence, the teams will have a considerable number of players on standby to sustain such unforeseeable or unavoidable situations.

The board (CSA) authorities have themselves agreed that players with considerable international experience who have been selected in the squad will have to work on their game time available and hone their skills. That’s how these players would make an impact and propel their comeback into the international sphere.

And what better to test one’s potential than to walk out on the probing sub-continental pitches to whack the white ball with Bangladesh playing the hosts?

Meanwhile, Bangladesh women have a qualifier lined up in December for the 50-Over World cup. As they have limited squad strength across all levels (Domestic, International) of the game and they do not as yet hold a full-time membership for the 50-over format, the Proteas emerging side’s tour in itself is a precursor to the qualifying ICC event.

All the international players would be a part of this squad and importantly this series would stage a post COVID rebound to competitive cricket. Their last international game took place during the T20-World Cup, held in Australia in 2020.

This squad is a combination of experienced, domestic and young players. A number of experienced players who are eying for a comeback to the international circuit have made it to the list.

A bunch of players in this have made their debut against India in the recently concluded limited over series. Jafta, Shangase and Anne Bosch were attached to the emerging squad so that they could get additional match time and also fine tune their skills further.

Youngsters like Tebogo Macheke of the Limpopo Impala Cricket Club have been part of the squad due to consistent batting performances in the last couple of years. Macheke is a solid wicketkeeper batter. Leah Jones received her maiden call up who has the potential to shine as she grew from strength to strength in the bowling department in the domestic circuit.

South Africa successful tour against India is an indicator that they are not relying upon senior or established players anymore but are weighing upon testing their bench strength further for the world cup next year. This gives more scope to players to be more dynamic in adapting to their game play with a chance to prove their skills in individual capacity.

Majority of the senior players who previously featured in 2020-T20 world cup in Australia have been selected for this series too. Due to the limited strength of players across all levels (Domestic, National) and insufficient game time post the world cup for players lead to the selection of this team. This series is a route to bridge the gap created by the Pandemic. It halted their sporting activity for over a year.

Bangladesh have a strong bowling line-up to restrict the Proteas emerging team’s batting prowess. Though, on the part of the Proteas emerging women’s side, the key focus will rest on the batting core to make an impact. That the fixtures involve five matches acts a precursor to the qualifiers to the 50-over world cup, that are to be held in Sri Lanka, slated to be held in December 2021.

Recently, the venerable ICC awarded a full time Test-status to the Bangladesh side early this month. If they can put together a cracker of a performance in the ongoing series, it will augur well for the form of the side as well as its competitiveness.

The five-match unofficial ODI series will be held between April 4 to the 13th of this month at Sylhet, Bangladesh.

Here’s how the first contest panned out:

Fargana Hoque and the spinners aided the Bangladesh women’s unit to emerge victorious in the opening contest. Middle order batter Fargana’s unbeaten knock of 72* latter in the innings enabled their team to post a total of 196. The spinners pitched in strongly and ripped apart the batting of the Proteas emerging team. The spinners lead by the senior player Salma Khatun teamed up with Rumana Ahmed and Sanjida Akter to remove the core players in the Proteas’ line-up.

Perhaps struggling to come to grips with testing sub-continental conditions, South Africa tumbled to chase what should’ve been a very gettable 197.

Bangladesh have a chance for striking even harder come the next game. That they’re in the field after a long break and have wasted no time at all in coming back strongly signals no loss of form or ineptitude. At the same time, the Proteas emerging side will aim to bounce back in the series and test their bench strength with the mega world cup in sights. 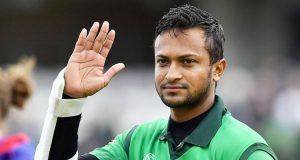 How The Exit Of Shakib Al Hasan Could Impact The Cricketing...

Chandhana Gogineni - November 7, 2019
0
Shakib Al Hasan was arguably the Superstar about whom Bangladesh could boast about, but his exit shook the core setup of the Bangladesh Cricket...