Had the great Sir Don been around, he’d have given a standing ovation to the feat. Sachin would salute this fine achievement. Belinda Clark would tip her hat in sheer admiration. As would Hehoe-Flint, Lara, Bates, Sangakkara, Mir, Devine, and Taylor.

There are good teams, there are great teams and then, there’s the Australian women’s side.

From Vadodara to Bay Oval – the Australian Women’s Team has made a world record of 22 consecutive ODI wins, a streak of consistency so remarkable that it would inspire envy from even the men’s teams.

They’ve come and done what no international cricket outfit was able to achieve in the ODI format despite playing the sport for tens of decades.

At the core of Australia women’s remarkable consistency at winning is a collection of talents so world class in their execution of plans and desire of winning that they’ve simply furthered the envelope of greatness that is Australian cricket.

Who wouldn’t want a side with a captain as enigmatic as Meg Lanning, a keeper like Healy, as agile behind the stumps as she’s powerful in front with the bat, a bowler as consistently nippy as Schutt and an all-rounder as brave as Perry?

But make no mistake; it’s not that the Australia Women’s side haven’t faced heartbreaks. It’s just that they’ve always come back strongly.

It was on July 20, 2017, that Australia Women’s side lost all hopes to win the world cup, courtesy Harmanpreet Kaur’s onslaught that thrashed them in the 2017 World Cup semi-final.

But the became team swallowed the pill and soldiered on.

However, the transformation wasn’t easy from the shattering defeat, which left them sleepless for a long time.

“We were all feeling pretty similar things,” Australia coach Matthew Mott told cricket.com.au, “It was a bit of embarrassment; when you’re used to success and people are expecting success and it doesn’t turn out like that, it can be quite confronting.”

Surprisingly, the Australian women’s side took a dramatic step to get back in the zone as Mott and team psychologist Peter Clarke decided to watch the semi-final again and that worked for them.

“We weren’t really sure how it would go. It certainly could have backfired. But it is one we all look back on now and go, ‘that was the moment where we actually looked inside and looked at our team, warts and all’. It’s funny how you almost need those crucible moments, where everything pulls back to that point to start the trajectory up,” he had said.

For a team that hammers opponents in broad daylight as also under flashing LED-sparked luminosity, it’s preparation in the mind that stands out.

And as per Megan Schutt, that was probably the first time they really showed that side of themselves.

“It changed our perspective and everyone realised we can probably be better to each other emotionally. We’d always been good on the field, but maybe off the field we needed to tap into that emotion and become closer,” she added.

What followed from the 2017 heartache was practice and yet more practice. But this wasn’t all. The team knew it could yield into a certain amount of success for they knew they had that potential, but what was needed was to change a few as things as well.

It started with the 2017 Ashes where the regular captain Meg Lanning ruled out due to injury.

Well, her injury opened up a new door to Alyssa Healy who successfully did her job at the top of the order and eventually sealed her place as an opener in the limited overs.

It could be said this rising to the fore when the doctor ordered truly unveiled a new side in Alyssa Healy, one of the cornerstones of Australia women’s batting unit.

Yet another moment around which the Australia women’s side’s legend was forged.

Winning the first of the three T20Is made sure they would retain the Ashes, but England had some other plans and they levelled the series on points.

That showed Australia needed to work harder to become a formidable unit.

Cut to 2018, in Vadodara, India in early March 2018, and the hard work they started finally paid off. They won the series under Meg Lanning. Later, in September 2018 during the New Zealand series, they handed over debut caps to teenagers Georgia Wareham and Tayla Vlaeminck.

Despite going with the set squad, the national selectors started to test the bench strength and that too paid off soon.

Whether it’s hosting an England or touring the White Ferns territory, the Australian women’s side have since then made winning a routine habit.

Here’s an example of their dominance: thirteen of their twenty-two wins (13 of their 22) have come on foreign soil, from the subcontinent to the unfamiliar conditions of Malaysia, going on to the United Kingdom and finally into the Caribbean.

While a lot of new faces have come in, a few have lost their places as well. But the core of the winning team remains the same. Surprisingly, only four players have played all twenty-one games – Alyssa Healy, Rachael Haynes, Ashleigh Gardner and Beth Mooney.

Meg Lanning and Megan Schutt have played 20 games whereas Jess Jonassen, Ellyse Perry and Georgia Wareham have played 19 games each. Apart from them, only Nicola Carey has played more than 10 games (16) in this time period.

“How we mark ourselves being able to consistently win in different conditions is something we rate really highly,” head coach Matthew Mott said. “The key to that consistency is the players themselves getting better and better. We’ve got number of players in the ICC rankings in the top ten, that’s something we’ve focused on, that they’re getting better every year.”

Meanwhile, implicit in their 22 winning-streak Australia managed to amass over 5000 runs, which included more than 35 individual scores in excess of 50 and 10 centuries struck by five players – Alyssa Healy (3), Meg Lanning (3), Ellyse Perry (2), Rachael Haynes (1) and Nicole Bolton (1) as well.

Apart from that, they have enjoyed a fair share of success while chasing. Since 2014, they have chased down targets in 31 matches and lost only 4 contests.

While Ricky Ponting’s record included World Cup wins twice in 2003 and 2007, Meg Lanning is yet to win an ODI World Cup.

Finally, an area where they haven’t struck gold but most certainly can.

All of that told there’s still a thing that needs to be addressed. The time frame in which they’ve gathered worldwide success.

While Ponting’s team made the record in one year, Lanning-led Southern Stars could manage it in three years (2018-21). Maintaining the consistency for three long years is certainly not a joke.

And you cannot factor out the fact that there aren’t as many games in the women’s sphere as the opportunities extended to the male version of the sport.

While the Australia women’s side has already proved why it’s called the best team in world cricket, it will be a cherry on the cake for Meg Lanning and ladies if they manage to extend their winning streak until the next World Cup. 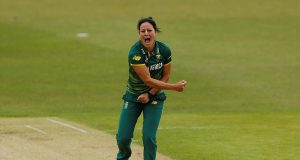 Marizanne Kapp: The Warrior For Proteas Women, The Rainbow That Completes...

Shreyasi Talukdar - May 16, 2019
0
For the last 10 years, Marizanne Kapp has served the South African women’s cricket team effectively with her all-around skill. Primarily an opening bowler...