The superman of cricket, Mr. 360, call him what you may, but Abraham Benjamin de Villiers is a generational great in the sport. A name that can intimidate any bowling line-up. A beautiful devil the bat that can get the measure of any line-up. He has the record for the fastest fifty, hundred, as well as 150 in ODI cricket. AB has scored 4849 runs in the IPL at a career strike rate of 151.91 after 169 games. These numbers that apart from proving AB de Villiers’ mastery in the IPL, seal his status as an all-time great of batting.

To talk of over dependence on two great pillars of the RCB batting, the side was so utterly reliant on AB de Villiers and Kohli in the last few seasons that we’ve seen if they got back in the pavilion early then the side used to lose half of the game at that point.

Though, this time around, with the inclusion of the ‘Big Show’ Glenn Maxwell, the RCB will be facing an existential issue.

Since it won’t be logical for Virat to come at 4 or 5 and with Glenn Maxwell in the squad this season, the question arises that where should AB bat for RCB in IPL 2021?

We’ll try to find the answer for that here, so let’s get into it:

AB de Villiers is the superman of cricket we all know, but quite like the Superman’s weakness against Kryptonite, AB de Villiers’ Kryptonite is spin bowling at the start of his innings. The following chart will help us understand it better:

The light blue bars represent the runs scored while the dark blue bars represent the strike rate. As you can see that AB struggles to score quickly against the spinners during the middle phase where he comes to bat most often. But now RCB has Glenn Maxwell in their batting line-up who scores at a strike rate of 153.3 at an average of 23.4 in the middle overs which is a good improvement over AB’s strike rate of 133.2 at an average of 44.4.

AB scores more runs but Maxwell scores faster in the middle overs especially against the spinners, which is more important in the T20 format. A quick fire thirty is way better than a run-a-ball forty in that phase. Also, RCB has to play 3 games at the slow and turning track of Chepauk where spinners will be bowling in tandem during the middle overs. It will be more important to score quickly and put pressure back on the spinners.

You can see that AB de Villiers is a monster during the death overs and can demolish any bowling line-up. He strikes at 250+ against the pacers in the death overs which is absolutely mad and to go with that.

His career strike rate in death overs in the IPL is 215. A heart-crushing stat if you are a bowler.

So, it’s clear that AB is at his destructive best during the later phase of an innings. He murders the bowlers to all parts of the ground. So, now comes the time to answer the question. AB should ideally bat at number 5 for RCB now with Maxwell in the side. Maxwell can handle the spinners in the middle overs and the AB can go bang bang during the last few overs of the innings.

But having said that, Cricket is a situation game and not a position game. So it ultimately depends on the match situation that where AB should bat. He can be promoted at 3 or 4 and start hitting from ball one if the openers gave RCB a great start.

So, on paper AB at 5 seems the way to go but it will depend more on the game situation and the needs of the team at that point in time.

Though, from a fan view you are also compelled to believe that should he have his way- which is often- runs will flow from the bat from a true talisman of world cricket. 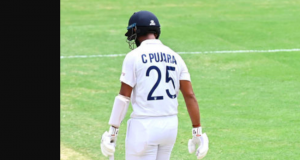 Why Are You Doing What You Are Doing Cheteshwar Pujara?

Dev Tyagi - August 25, 2021
0
Once Cheteshwar Pujara walked into a restaurant and upon being offered the menu, took so much time to...