‘When it rains, it pours’, this saying is more than apt for the current state of South African Cricket, drenched in the rain of misery that’s getting heavier every moment.

Why do I say this?

Well, the on-field debacle of losing five out of the six series contested by the Proteas’ this summer has now been fuelled by off-field power ridden shenanigans.

Yes, that’s right, the power hungry and corrupt apex body of Cricket South Africa, the Members’ Council consisting of 14 board members has failed to accept the amended MOI (Memorandum of Incorporation) in a meeting held this Saturday, as proposed by the Interim Board.

The Interim Board is a temporary structure, appointed by the Sports Minister, Nathi Mthethwa last October to rid Cricket South Africa of its corruption, power struggles, misconduct and malpractices amid horrors galore that CSA finds itself engulfed in since the last 18 months.

This after, the Members’ Council had principally agreed to the MOI on April 10th, which chalks out the appointment of Independent Directors to ensure smooth running of cricket bereft of corruption, malpractices and power-driven agendas.

As we have seen globally, when administrations have the best interests of growing the game, it’s a boon for cricket.

The stronger the cricketing foundation, the stronger is the nation. Look at the BCCI, CA and ECB and you will have your answer.

Unfortunately, CSA hasn’t been in this mould and has rather been marred by uncertainty galore with the appointment of three interim CEOs ever since the incumbent Thabang Moroe was ousted for misconduct.

This latest stand of not accepting the MOI by the Members’ Council has left the Sports Minister with no option but to invoke his powers in terms of section 13(5) of the National Sports Act which allow him to notify the national federation in writing that it will not be recognised by Sport and Recreation South Africa.

As a result, CSA will not be the official Cricket Governing Body in South Africa and their funding will be all but over from the Sports Ministry.

The ramifications of such a step are huge!

Yes, in all likelihood South Africa might face an international ban from the ICC as per their policy of not allowing government interference in sport.

We have seen this with neighbours, Zimbabwe when they faced an ICC ban in 2018.

Zimbabwe’s Sports and Recreation Commissions due to some reasons had dissolved their Cricket Board and the ICC sanction was only lifted after the Government interference came to an end.

Truth be told, what other option does South Africa have when the Sports Minister is actually trying to rid the game of corruption by appointing Independent Directors and the corrupt Members’ Council are still hell-bent on ruining the game.

What baffles me is why was the Members’ Council appointed in the first place, given they have unlimited power and no accountability.

Do the South African players deserve this, especially with a global tournament, The World T20 on the horizon, which should be their prime focus, considering the diminishing and inconsistent form and a struggle-ridden mental aptitude they have shown this summer.

Moreover, do we Protea supporters deserve this?

One can only hope better sense prevails, with this matter being amicably sorted out and the men in green and gold can still showcase their talent on the global stage.

Whether this is just hope or reality, in time we will have the answers. 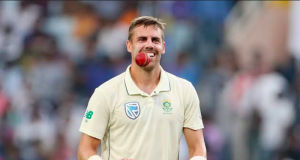 Abhinav Bose - August 24, 2022
0
Brendon McCullum's presence on a Cricket field was always fraught with dashes of audacity. He would step out...