We are well into the second week of the 2021 edition of the Indian Premier League (IPL) and there is one team who has remained unbeaten. Three games, three wins and boom, top of the table. No, it is not the defending and five-time champions Mumbai Indians (MI). It isn’t the recent surgers Delhi Capitals (DC). It is also not the consistent Sunrisers Hyderabad (SRH) nor MS Dhoni’s ever-lasting Chennai Super Kings (CSK).

It is Virat Kohli’s Royal Challengers Bangalore (RCB) who are at the top of the tree with three wins on the bounce. Make no mistake, it is still early days in this IPL 2021 and there is a long way to go. But this has never happened in the history of this Indian T20 league. 2014 was the best ever start that RCB got before 2021, winning two to start the season before things went haywire.

Now, 2021 has kicked off with three wins on the bounce. As Virat Kohli said after the second win against SRH, there is no point getting excited by every win or taking the losses too deep. However, the way RCB have gone about business, things looked very promising.

Moreover, the teams that they have beaten, they never had a win-loss ratio of under 1 before this tournament started (it’s still under 1). In fact, the games that they won and from the positions that Virat Kohli and co have won, they are the very situations from which they have tended lose. The middle-order failing to build on the start or the bowlers not able to defend par or slightly below par totals, losing from winning situations.

But things have been different this year. Remember, these three wins have come without their a few of their big players performing. Kohli hasn’t taken off yet and has looked slightly sluggish. Yuzvendra Chahal got his first wicket of the season only in the third game. Washington Sundar hasn’t had a big impact either.

Thus, the three-time finalists who finished fourth last season seem to have done quite a few things right and a lot of their tactics have worked in their favour. Here’s a look at some of them.

For the nth time, eyes were raised when Glenn Maxwell was solid for a whopping sum of INR 14.25 crore in the IPL auction of the 2021 season. RCB were the buyers and they have a history with such expensive buys as well. But they don’t quite lived upto the hype and expectation.

However, that hasn’t been the case with the ‘Big Show’ as he’s put on an absolute show to kickstart IPL 2021. He has stepped up beautifully and has played a massive role in each of RCB’s three wins. IN three games, he has smashed 176 runs averaging 58.67 and striking at 149.15.

In the seasons gone by, the hype around Maxwell has been unreal but he has flattered to deceive time and again. Only in two seasons (2014 and 2017), he has amassed more than 200 runs. And this season, he’s already on the brink of 200.

In fact, such has been Maxwell’s inconsistency and failure to deliver that the last time he scored an IPL half-century, MI, KKR and CSK – all had just two IPL titles while Kohli hadn’t even become India’s white-ball captain. And now, he’s got two in two innings and seems to be flying high.

The Maxwell that has arrived for RCB seems to be a different beast. He’s dominated the spinners and has played the pacers superbly as well. These runs have come on a Chepauk track that has been tough to score off. He’s scored freely and has invariably pulled RCB out of trouble almost every time he’s walked out to bat.

One of RCB’s perennial problems has been bowling at the death. Year after year, it is the same issue. The batters rack up big runs but the bowlers are unable to defend it more often than not. In fact, in the last three seasons, RCB’s death bowling economy rate is 11.03 which is the worst and their bowling average of 24.11 is the second-worst in the period.

Thus, the question arose this year as well. Moreover, RCB had released their specialist death-bowler in Chris Morris. However, they traded in Harshal Patel for this specific role (as admitted by him) and he has performed superbly. His slower balls and yorkers have been absolutely spot on. He has led the charge for RCB at the death.

Patel has taken nine wickets in three games and is the Purple Cap holder. In fact, out of those nine, eight have come at the death. He has an economy rate of 5.27. Overall, RCB have conceded runs at an economy of 7.42 which is the second-best among the teams that have played in Chennai so far.

They’ve picked up 16 wickets which is the most and bowled 40 dot balls as well (out of the 89 balls bowled). Mohammed Siraj’s improved immensely at the death. He’s conceded just 19 runs in three overs that he has bowled in this phase. Shahbaz Ahmed bowled one over and it proved to be a game-changing one. Kyle Jamieson has been expensive but he has picked wickets. Yuzvendra Chahal is the only bowler who hasn’t had much success at the death.

The pitches may have helped but RCB’s planning and execution at the death has been pinpoint.

The flexibility and utilization of the resources

RCB haven’t been afraid of trying new things in this IPL. Be it promoting Washington Sundar and Shahbaz Ahmed up the order against MI and SRH respectively or getting their batting order and match-ups right like bowling Shahbaz in the critical 17thover against SRH.

Dan Christian’s entry with the bat has been delayed as he isn’t that comfortable against spin and hence, the likes of Shahbaz and Sundar have been used ahead of him. With Padikkal ruled out of the first game, Sundar was punted upon as opener. In the second game against SRH, who had a leg-spinner and a left-arm spinner, Shahbaz batted at 3 to counter that. In fact, he was even padded up in the game against KKR and he may well have come out to bat if another early wicket would’ve fallen.

The use of the fast bowlers has been excellent too. The likes of Mohammed Siraj who is improving and has come leaps and bounds and Kyle Jamieson have the tendency of leaking runs. Thus, Harshal Patel is entrusted upon to bowl at the back end and the Siraj-Jamieson duo are largely used with the new ball and have bowled a maximum of one over at the death.

There is a lot of talk that goes around stating that your best batsmen need to bat higher up the order and face as many deliveries as possible in T20 cricket. That may be true to some extent but not always.

RCB have done really well to resist the temptation to send in AB de Villiers at #3 ahead of Maxwell. The retired South African superstar is still one of the best in the business and is still winning games single-handedly. However, it has become no secret that he does slow down and struggle against spin and that has come to the fore in the last few years. Moreover, his value at the death increases multiple folds. He is as destructive as someone like Andre Russell and no game or innings is over till he is at the crease.

Hence, having de Villiers at 5 has not only allowed him to express himself and go all out without any headache of resurrecting the innings, it has also given the cushion to Maxwell to go about his business at his own pace and time. Thus, with de Villiers coming in post the eleventh or the twelfth over, it’s allowed him to smash away at the death while Maxwell has taken on the spinners. It has created maximum impact as well.

All in all, RCB’s game-plan, tactics, planning and the execution have been excellent in these first three games. Be it with the bat or ball, RCB have been a notch ahead of their opponents. They have remained unbeaten in the Chennai leg.

This is just the start and even last season, they squandered a pretty good start. However, there is promise but RCB will need to continue this as their caravan now moves to Mumbai for a couple of games. As they say, “well begun is the job half done” and RCB have certainly done that. Tougher challengers await Virat Kohli and co but for now, they can rejoice after an unbeaten first leg 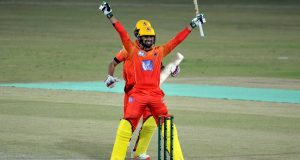 Abhishek Srivastava - November 12, 2020
0
In past 12-18 months, Pakistan’s stocks have fallen in T20 Internationals and before they lose their way like they did in ODIs, it’s time...