Glenn Maxwell is someone who can break the game in the middle overs of a T20 but not necessarily someone who can repair a broken inning in the last five to seven overs. The latter was his primary role in Punjab Kings outfit and the former is his role for the RCB, a performance that has endeared him to millions of IPL aficionados.

That Maxwell possesses the power of multiple firing cannons is known to all but whether he can adjust his game as per the needs of his team and hence, the changing situations, was something everyone anticipated curiously.

Finally, the sharpshooter who dismisses bowlers with glee has also turned the watchful protector as seen thus far in this edition of the IPL.

But how did the transformation come about?

Glenn Maxwell has been given the perfect role by the RCB and he has aced it so far in this season.

Apart from well known facts like the freak he is and the skillsets he posses, he was been frequently thrown under extremely difficult circumstances in the previous franchises he played for without an assessment of his strong forte. Add to that, the pressure of being the lead batsman for his team and the price tag as well, things never went right for Glenn Maxwell in IPL over the years except for that 2014 season which seems like a generation ago.

There is also no denying the fact that his bat swing is much better in this season when compared to previous seasons as explained by Brian Charles Lara himself in the Star Sports dugout.

“In the IPL 2020, Glenn Maxwell was trying to play golf and in IPL 2021, he is back to cricket,” is the summarization given by Brian Lara and the southpaw knows ball and you got to respect and accept it when the man says it himself.

The one on the left is what was described as a golf shot by Lara which Glenn Maxwell was playing in IPL 2020 and one can see the change in his elbow position in IPL 2021 where he is getting over the ball with left elbow coming through which was called a cricket shot.

Glenn Maxwell is an all round player and when he is on song, he can smash any bowler and  doesn’t have any glaring weakness in his game. He has the ability to access all the parts of the ground with ease. A player with this insane amount of talent failing repeatedly in world’s best league was something that no franchise really bought and that was one of the main reasons why franchises were going hard for him in the auctions even after his pathetic show season after season.

He is one of the very few overseas players in the IPL who can smash the spinners without breaking a sweat. And that was the loophole for the RCB in the previous editions of the IPL where they lacked a middle overs enforcer while the spinners were primarily in operation. They came into the auction with the intention to go all out for the Big Show and they bought him and assigned him the perfect role which aligned with RCB’s needs and now the results are for everyone to see.

Now, what is that perfect role that has been said repeatedly in here?

Its all about the entry point. Glenn Maxwell seems to enjoy the cushion of someone behind him and he brings out his destructive best when he has the luxury to take some balls to assess the condition before going bonkers.

His entry points in the games against MI and SRH were around 6th and 7th over mark. His first 10 balls strike rate in both those games were 110 and 60. In both these games, he had some reputed names like AB de Villiers and Dan Christian behind him.

Little surprise then that in both these games, he played a mighty significant role in helping RCB pocket two points.

He took the attack to the opposition from the word go against KKR as he had to come inside the powerplay and exploited the fielding restrictions to perfection and his strike rate in the first ten balls was 180 in that game. It just shows the versatility of this freak hitter of the white-ball.

He has had a dominant start to this year’s IPL just like the one in 2014 and made the Chennai leg his own where tracks were a mine field for the batsmen. Him moving to better tracks in upcoming league matches can ensure that RCB is benefiting from the Victorian to the fullest and not just for the first four games.

But that being said, how do you think might Glenn Maxwell perform for his team’s fifth game against the Super Kings? 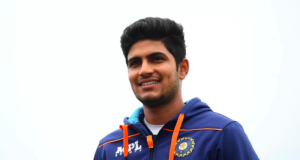 Ashish Kumar - January 26, 2023
0
Rising star Indian opening batter Shubman Gill has been constantly smashing records one after another and hitting the...