The Twitter stratosphere at this time is singing praises. Blogs have erupted with the mega update. News outlets from around the world are reporting on the big cricketing development that has humanity at its heart. Rival IPL teams are also joining in the chorus of praise.

Fans are delighted. As are writers, self-styled pundits and those for whom Cricket represents a larger-than-life event.

No a hat-trick hasn’t been taken. No one has hit six back-to-back sixes in an over. Nor has someone hit a 150 in the ongoing IPL.

Does everything in the sport have to only be about an incredible wicket-crushing delivery, the glorious doosra, the switch-hit or a powerful score inside the power play?

There are some battles, it must not be forgotten, that need to be won outside of the cricket pitch.

And if there’s a star you need to win that key battle for you, then it’s not Morgan, Kohli, Padikkal, Dhoni, or even Ab de Villiers.

Over the course of the last 24 hours, the situation with COVID-19 cases and the pandemic‘s new wave has taken a brutal toll on the cricket-loving country.

No fewer than 3.52 lakh COVID cases have been recorded from around the country. The leading hospitals around the mega urban cities have been crying like petulant babies regarding the serious shortage of oxygen-generating plants.

As of the last 48 hours, a deal was inked with Germany to import oxygen cylinders. And in the middle of all this mess with people dying and funeral grounds overburdened- by their admission- due to a serious deluge of dead bodies, there came an answer from the cricket pitch.

Someone heard from the KKR camp.

Not an Indian but an Australian stood up to offer some solace, relief that was so badly sought akin to a well-set batsman being grounded thanks to a menacing bouncer.

In offering a whopping sum of USD 50,000 dollars toward the PM Cares Fund, Pat Cummins has made not just an extensive donation, but hit something you’d liken to a winning six in a super-over.

If there’s a man-of-the-match award outside of the cricketing turf, then all would unanimously vote for Pat Cummins.

With this precious sum of money, some of India’s healthcare facilities would be able to afford the much-needed oxygen that has, thus far, emerged as a burning issue.

That being told, for a country for whom cricket is nothing short of oxygen how beautiful is it that a foreign national, privy to the plight the country is facing has stood up to offer a solution?

Perhaps it would make for a cracker of spicy headline to criticise those wealthier cricketers who could so easily have taken the step before Pat Cummins did.

You know their names. You know by heart the advertisements that kiss their forehead after nearly every single IPL over.

But it makes little sense to engage in shenanigans.

Our country is suffering from a serious toll of disease.

And a fast-bowler has attacked it opening a hostile spell. No wonder, Pat Cummins, one of the most expensive picks has performed like a true all-rounder.

Not only on the pitch where he struck, just the other night, a glorious 66 off just 34 against the CSK but on the real turf of life where one’s constantly jostling between a life and death situation.

The only thing that needs to be seen now is whether the others will stand up? An example has been set. Are the others driving around in expensive cars having access to salubrious penthouses interested to play their part? 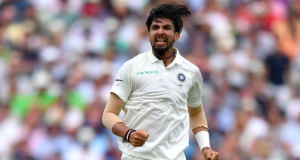 Ishant Sharma: The Transformation Of An Unheralded, Ever-Lasting Fast Bowler!

Sahil Jain - September 6, 2020
0
You look at Ishant Sharma and it’s hard to imagine that he’s celebrating just his 32nd birthday. It seems like he has been around...